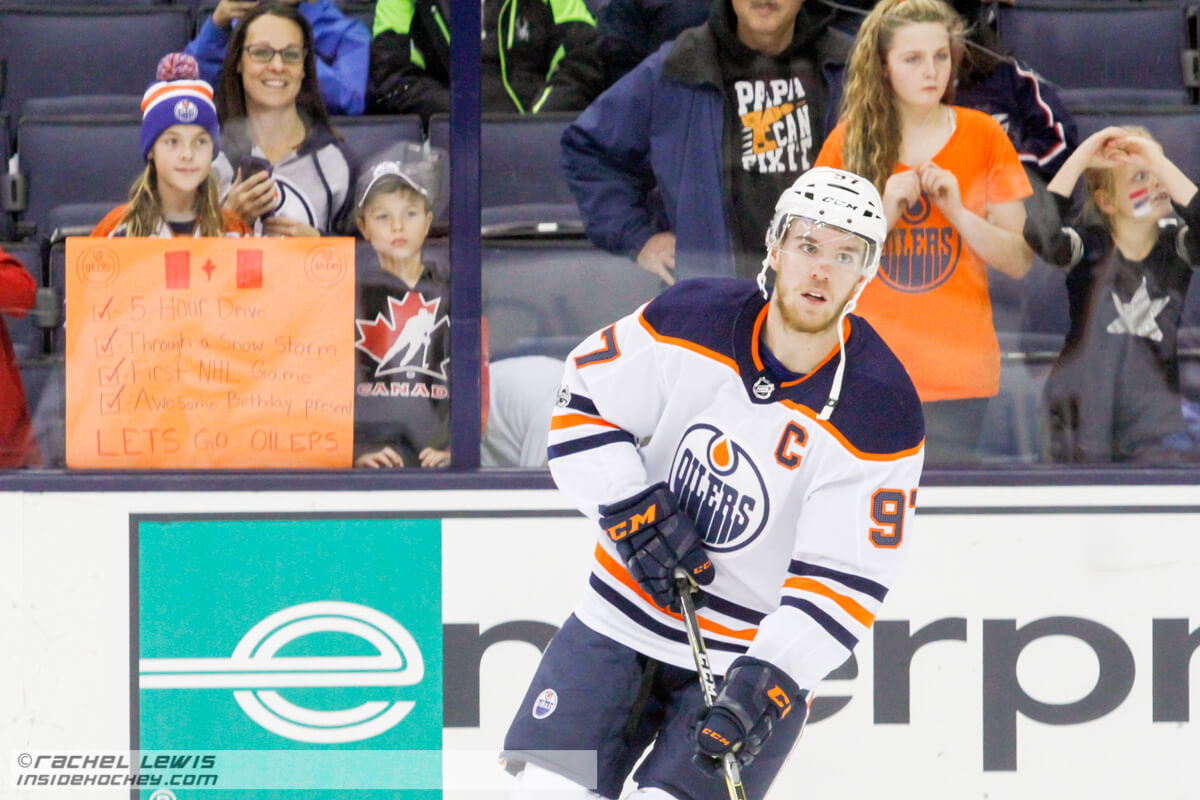 The Ducks beat the Oilers in Anaheim on Friday night, and all anyone could do after the game was talk about Connor McDavid.

Could this be because on the first series of plays in the game he grabbed a puck and went to the right of the Ducks’ zone, then burst around Cam Fowler? No, I didn’t say Kevin Bieksa, or Francois Beauchemin, who skate like they’ve got bricks in their pants. I said Cam Fowler, the fleet-footed defenseman who rarely gets beaten by anyone and who puts a fair few opposing players on the seats of their pants trying to snag him as he goes by him.

McDavid’s just that fast. Hampus Lindholm discussed it after the game, saying “When he gets that speed going, there’s not many Ds that can stop him. You have to respect him, try to keep him to the outside. You don’t want to let that guy pick up speed.

He described the way that he tries to defend. “If you get puck watch[ing] and you do crossovers, as a D, he’s going to go the other way, and you’re going to be chasing him. I think you’ve got to keep both feet on the ground, pick up some gap, and look him in the chest. And then obviously, you need some help from your forwards, so he doesn’t pick up speed from his own zone.

Josh Manson was even more candid (or maybe just a little more resigned to getting beat by McDavid because he’s not as quick as Lindholm. “It’s a tricky thing, because he’s a really good player, but if you overplay him with two guys, he’ll find the guy that’s open. I think our forwards did a good job tonight at limiting his speed, limiting his chances. . . . He’s a special player, but I thought they did a good job tonight helping us out on the back end.”

“You’ve got to respect [his speed]. He’s a good player. What can I say you can do? There really is nothing. You’ve got to make the read and try to keep him in front of you.” He was laughing as he said this. “He can handle the puck and make plays at top speed,” he later said. “He does everything so fast, you’ve always got to be on your toes.”

He further said that McDavid is tough to hit, because he’s always got his head up. That makes him hard to slow down.

The Ducks, for all that, did a good job against the Oilers despite not getting out to a roaring start. Two nights ago, the Kings put Edmonton in its place by scoring right off the hop of the first period. They did the same right at the start of the second. The Oilers came back to 2-2, but they couldn’t hold it, and their postgame comments admitted that they’re just not good for sixty minutes.

Their coach, too, was resigned to the fact that his team plays what I would call an immature game, not being able to focus for the whole of the three-times-twenty.

But Edmonton wasn’t so unfocused on Friday in Anaheim. Instead, they were able to press back to respond to the Ducks. John Gibson made some strong saves early, especially since he faced 14 shots in period one. Nothing went in after Lindholm’s goal at 2:28 of the first and before twenty minutes had expired. For stretches, the Oilers controlled. Most of their shots came from in close, rather than off the rush, but John Gibson was equal to them.

Speaking of whom—his health was a concern until late Thursday. He was reluctant at practice to say what was going on, only mentioning that he had something still lingering but wouldn’t say what and wasn’t clear on how bad it was.

He played a fine game versus Edmonton, albeit looking kind of hobbled in the first period, laboring to get back to his feet repeatedly after the puck went away from his end.

The Ducks stalled around in the second, killing two penalties in the process, and struck with about five minutes to go, Getzlaf to Perry on a sloppy clear by Kris Russell. He lobbed it out hoping to get it over his blueline. Getzlaf grabbed the puck and put it to his stick. He dished it to Perry, who was behind the defense.

Perry took two strides and fired, but first opened his blade to freeze Cam Talbot. It worked. The puck went in under the goalie’s pad. 2-0.

Edmonton responded a minute later when Francois Beauchemin lost a puck, and the Oilers Anton Slepyshev scored his second goal of the year. There was, naturally, no assist.

The teams would trade goals in the third, Kesler first scoring for Anaheim what would end up being the winner but putting them ahead at the time, 3-2. Kris Russell got the game to 3-2 with five minutes to go. The Oilers took a timeout with about a minute to go, then pulled their goalie. The puck ended up in their zone off a high stick, thus Talbot came in again. The Edmonton team couldn’t muster it down the ice and get a chance, so the game ended 3-2 for the Ducks. The shots were 34-32 for Anaheim. They won the faceoffs, too, 52 percent to 48.

So once again, though the score wasn’t quite as bad as Wednesday (5-2, but two were into the empty net), the Oilers failed to hang in there with a (slightly) stronger team from the West.

Was this a test for the Ducks? To a degree. McDavid alone makes the game interesting and challenging. The speed and acceleration are incredible on this guy. But he can’t do it alone, and the team just doesn’t support him well. Maybe he’s just too good, but someone, somehow, has to figure out how to hang with this fellow if his talents are going to be exploited.

Having said that, note that he assisted on the second goal, bringing his points total to 64 (21 goals) and ten in the past four games.

My new book is Mixing Memory and Desire: Why Literature Can’t Forget the Great War.