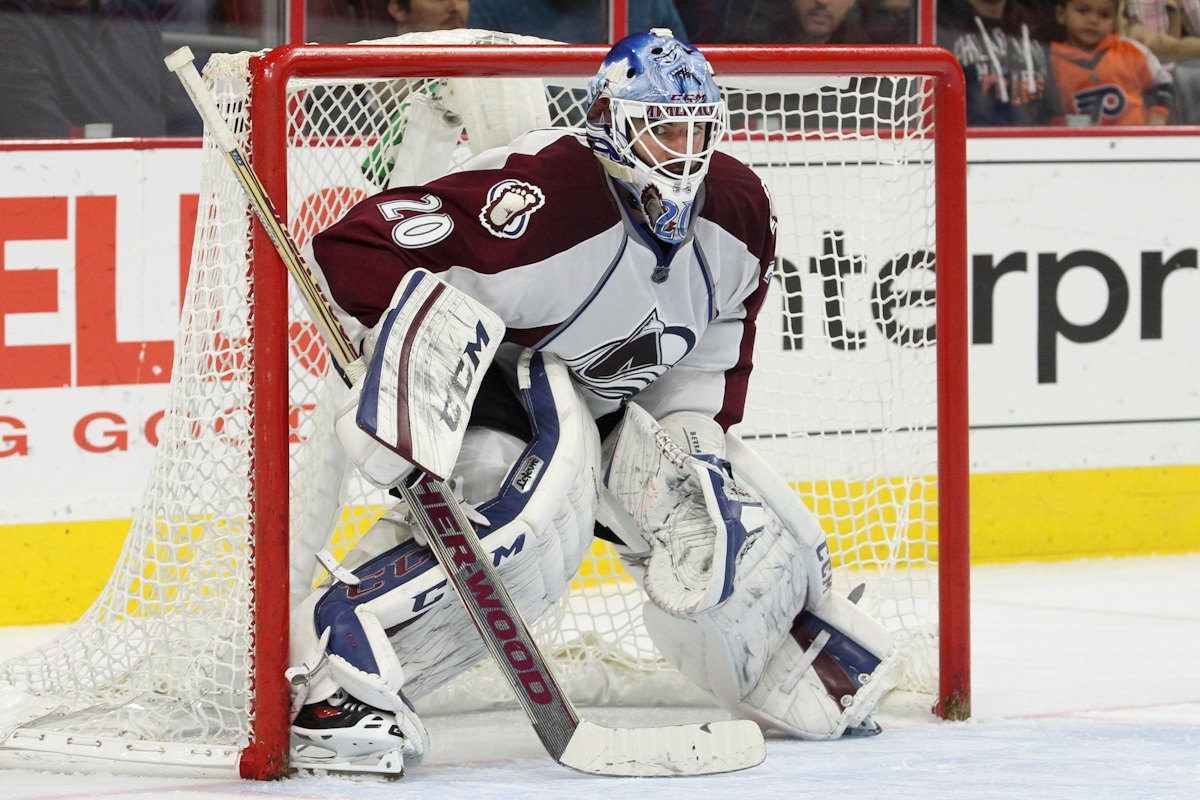 Goalie Reto Berra (#20) of the Colorado Avalanche protects the net

The Anaheim Ducks have won all they need to at this point. In fact, this was true even before their game versus Colorado on Friday night. But with three games remaining—the Avs, Dallas, and then Arizona—they had the chance to pile up more points in anticipation of the playoffs. Their hope? That they wouldn’t coast into the post-season, losing momentum as they went, as they have done in the past. A strong finish would mean a strong start to the chase for the Cup. And, Coach Boudreau would say after the game, one thing he really cherishes is winning the Western Conference. “There are still goals out there. We love our home record, and we think we’re good at home, so we’d like to win the West.”

Hard not to win games when you’re playing teams significantly weaker than you are, and especially when Patric Roy played his weaker goalie (Reto Berra), doing so, he said, as part of a rotation he’s been using but to Kings fans anticipating the Avalanche Saturday, a sure sign of a plot to keep their playoff hopes on tenterhooks.

Yet the Ducks, if their plan was to stay sharp, didn’t exactly attack early. In fact, Colorado got the first goal of the game, on a play where Jordan Caron was right in the face of goalie John Gibson. It was quickly waved off. Goalie interference.

But the Avs got one for real just after that, three guys coming into the zone and spreading out the defense, the lackadaisical defense, and Gibson, who couldn’t do a big enough splits to get to his left far enough and fast enough to stop the shot of Duchene. Not the goalie’s fault by any means.

Lineup-wise, the Ducks’ approach might have had something to do with who was in and who out. Ryan Getzlaf and Patrick Maroon were both not playing, not hurt, but having “maintenance days.” This meant that the first line was Perry, Rakell, and Jiri Sekac. They capitalized to give the Ducks their second goal.

Before that, however, they had to score their first (the second million is easier to make than your first, right?), and that came when Sekac got the puck, started down the ice, realized he was more or less alone turned on the jets, and spread his legs wise to keep the defender to his left from stealing the puck. He then deked it into the net.

Oh, and that second one? Perry muffed a puck off his stick from behind the net, saw it roll to Rakell, and watched as he put a wrist shot far side into the open corner. And voila, one period, one defeated-looking Avalanche team. They had, it must be said, outshot the Ducks by one, 12-11, in the period. And they weren’t playing for nothing. They still had a faint chance of the playoffs, albeit with the need to move past four teams to do it. In other words, they might have been telling themselves it was possible, but for reals? No way. The game proceeded to be close, and the Avs pulled ahead by a goal in period three, when a puck was thrown to center, picked up by Duchene and taken on net. He outpaced Vatanen and slid it between Gibson’s legs. That made it a 3-2 game. More was to come.

Didn’t matter. The story was not this game. Rather, it’s about the team’s readiness for what comes next. With that in mind, what’s shaking in Anaheim?

A small handful of themes. First, what’s to become of the goaltending in the playoffs? Boudreau is famous for panicking in the post-season, switching goalies, and losing series because of it. So it’s probably a bit nervous-making for fans to know that he’s not willing to commit to a starter, a number one, as the season winds down. Instead, he’s platooning Gibson and Frederik Andersen, who are playing nicely along. The players, too, with no less than quiet leader Andrew Cogliano saying that some goalies play better against some teams, some against others, and that he and the Ducks aren’t distressed by the situation, but rather see it as a strength, in the media anyway.

This is going to blow up. Probably later rather than sooner. But teams want to know who the netminder is, and how good he’s going to be. Everything builds out from there. So with that uncertainly, or an easy hook hand, it’s going to be uh-oh time in Anaheim if, for instance, they lose the opening game or two of their first-round playoff series.

A second theme is who plays with whom when the playoffs start if everyone is healthy. Our lady of perpetual mysteries with this team is who can keep up with Getzlaf-Perry. Sometimes it’s Maroon. It’s been Beleskey (lower body injury), Rakell, Silfverberg, and on and on. If that’s not settled, there’s a trickle-down effect through the lineup that ends up confusing things. Greatly. Of late, it’s been Sekac up there, and after the game Friday night, he said mostly cliched stuff but gave the message that he’d like to stick with them. Who wouldn’t? “It feels good. The more time you get with the same line, and with that ice time, your confidence is going high, and you feel more comfortable.”

A third is whether some of their new pickups will be the strength-adders that the team hopes. Right now, Sekac is looking like a much better acquisition than most people might have thought he would become, especially so fast. He’s just 22, and while the team had to give up Devante Smith-Pelly, the Sekac maturity factor is somewhat higher than a youngster who’s just moved cross-continent to a new team might typically display.

Will Wisniewski be what the team hoped? That is, assuming they hoped he’d be steady on defense and contribute offensively? Check that. They likely knew quite well of his tendency to wander, his lapses on defense. So let’s ask it a different way. Would the guy be able to produce offense, especially on the power play, that would help the Ducks win a playoff game or four? Francois Beauchemin said afterwards that the PP hasn’t been all that good all year, and that it would be nice to improve it. “We’ve got to simplify it. Not passing the puck all around. Shooting more, having a shooting mentality, and get to the net for the rebounds. Keep working on it, keep working on it.

Same question regarding Simon Despres, who came for a guy who had gradually built himself into a reliable rock on defense, Ben Lovejoy. Thus far, he is holding his own at +12 on the year, though note that with the Pens, he was +9, and with the Ducks, just +3. That puts him in the territory of Clayton Stoner )-2), Korbinian Holzer (+3), and Sami Vatanen (+6) and nowhere close to the elite two on the team, those being Beauchemin (+20) and Lindholm (+27).

Yet another on that list is Tomas Fleischmann, who came from Florida at the end of February. He has 26 points this year, including five with the Ducks (one goal) in 12 games coming into Friday. On this night, he was playing with Kesler and Kyle Palmieri on what is the second line.

And finally, you have Chris Wagner, not a new acquisition, but a young player, not quite 24, a Ducks’ draftee in the fifth round of the 2010 draft. He has played just eight games now, but he gets his place. In period two on Friday night, Corey Perry got into a scuffle with Cody McLeod. They each got minors, and Despres got an additional one for coming in to Perry’s defense. But interesting, on a play near the end of the period, Wagner took McLeod hard into the boards in front of the Avalanche net, payback, or a tiny warning. Looking at his PIMs shows that he hovers around 70 almost every year. Some of those have to be fights, or he’s doing a lot of tripping and holding. But having him come to Perry’s aid against a rough-looking bast*&^ like McLeod shows you that whatever toughness the Ducks need going into the post-season (don’t scoff—Dallas was quite nasty last year, demanding a harder style of play than what the playoffs typically do), they have it in a variety of spots in their lineup.

Periods two and three against the Avs did little to answer any of these questions, instead featuring one more Avs goal in P2, a bunch of Ducks’ penalties in the same frame, and the eventual resolution of a 4-2 score via an empty net goal scored with about a minute and a half to go. The Ducks took a timeout with the game at 4-2 and 1:10 left, drawing up plays. Never give up and all that, but really, what was the point? Maybe simply to make the point that you keep fighting. That it still matters. That there’s no coasting going to be done, nor will there be if the team has hopes of a long playoff run.

So is the team ready for what comes next? After, here’s what they were saying: Beauchemin commented, “The sense of urgency is really big. We only two games left before the playoffs, and we did some good things the last four games, but tonight was not good enough. Way too many odd-man rushes against, and too many penalties. You have to be more disciplined. You can’t keep taking three, four, five penalties every game.”

He later added, “The playoffs are going to come fast, and we’ve got to play with the same intensity and the same focus every night.” Indeed, the Ducks have not been a consistent bunch at all, even going back over the past few seasons. That is, if you can discount the number of games they’ve won this year.

He mentioned that Boston, the year the won their most recent Cup, was much better on the PK than the PP. Boudreau would later echo this idea in his postgame comments. “Boston, when they won the Cup, I don’t they scored a power play goal until the final series. Penalty killing is a must. Games in the playoffs are 2-1, 3-2 at the most.”

The arena was sold out on Friday, as has become more typical. Playoff tickets were apparently still available, as they were being touted over the loudspeakers.

Almost lost tonight: Stefan Noesen made his NHL debut from a hometown of Plano, Texas. He got 6:54, including some time with Kesler and Perry late, a shift in which the pressed and might well have scored. Noesen was also visible blocking a shot out at the point earlier in the third period. That and a missed shot were his statistical contributions for the night. After the game, he said, “Emerson went to wrap around the net, and I found a little seam there and was able to get a shot off. Unfortunately, it didn’t go in. I think the D man got a stick on it, plus, it was not where I wanted it.” He summarized his night by saying, “Awesome. Dream come true, really.”

His coach named his play as one of the positives on the night. “Maybe I should have played him more,” Boudreau said.

My book Facing Wayne Gretzky might be just what you need for that few days of gap between the end of the regular season and the start of the playoffs.