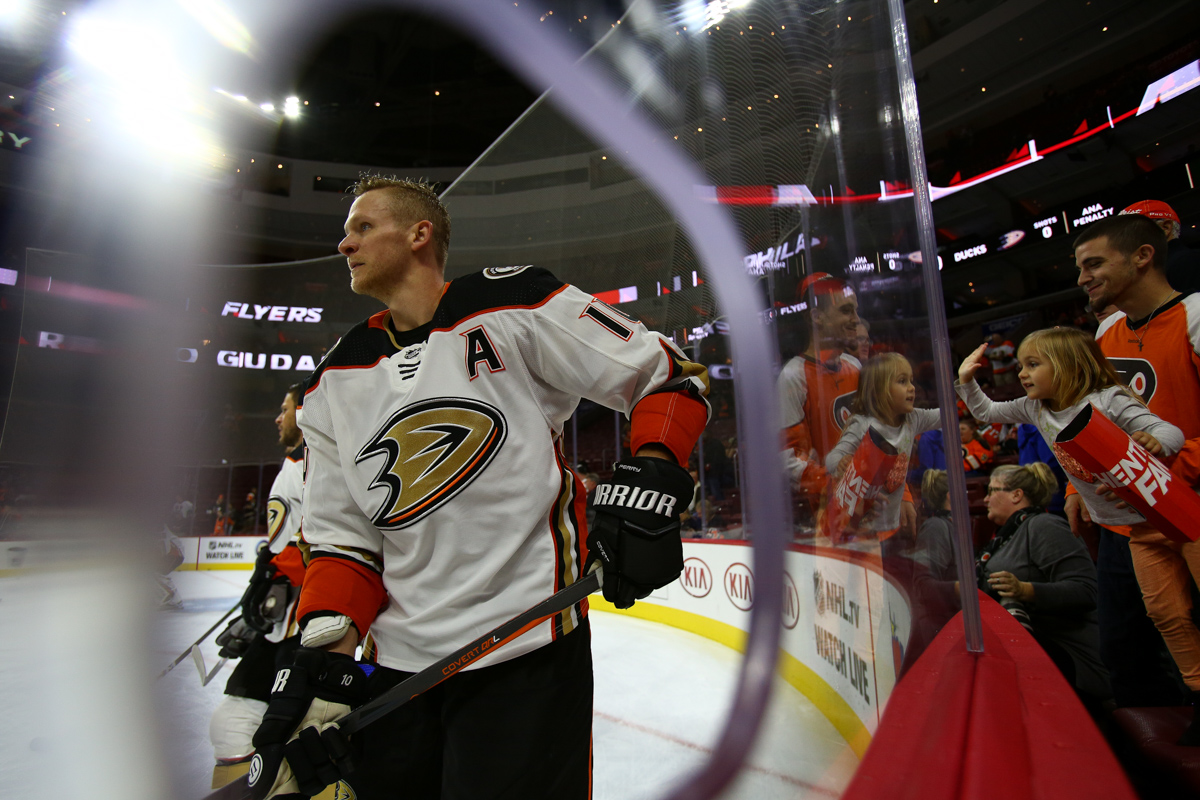 Three fights in one period. It needn’t be said that you rarely see that any more. But Saturday night in LA, it was the perfect storm.

Retribution needed to be had for a nasty hit that Kurtis MacDermid put on Ondrej Kase of the Ducks when they played early in the month in Anaheim. Mike Liambas was the one to try it.

He got his behind kicked by a much bigger MacDermid. No retribution accomplished, which might be what led to fight number three. But wait for that.

Honestly, Liambas’s actions might signal a role that’s needed, and I’m not altogether against the notion of retribution, but Liambas is doing nothing but fighting in his time with the Ducks.

It’s not 1977, but nobody’s told him, or his coaches, that. Sure, he’s 28. Sure, he played only one NHL game prior to this year, so he obviously wants to stick. But he’s now played five games this year for the Ducks and had three fights. I saw him in the hallway in Anaheim yesterday, and he had a black eye and stitches.

So let’s make it official. You win, Mike. You’re a bada$$. But please, learn to play some hockey. It’s a new era in the game.

The second fight was, apparently, an actual immediate grievance being settled as Oscar Fantenberg and Andrew Cogliano squared off. It wasn’t much of anything, but at least it wasn’t the usual semi-skilled guy pushing match. In fact, Fantenberg landed a couple of shots to the side of Cogliano’s helmet, and they both went down. End of story. But they got five each.

The third one was really disgusting. The combatants discussed it beforehand, at length, in a break in play in front of the Anaheim net, Andreoff of the Kings chatting with Bieksa of the Ducks.

That’s like baiting the bear, and Andreoff paid for it. As soon as the puck was dropped, he went towards Bieksa from his left wing position. Andreoff started with a hand out as a range finder. Bieksa just waited for a second, a literal second, and then pow! Right on the kisser. Andreoff went down. He got up wobbly, ready to continue, but the officials had stepped in. He was obviously not right in the brain.

He went off the ice, one assumes to the concussion protocol testing, and didn’t return in period one. Nor later. Stupid. Just stupid. It’s tempting to call it brave, because Bieksa has a nasty, square-jawed look about him. But what’s the point of valorizing this? There is none. Andreoff got knocked semi-conscious for nothing.

The game went on with the Kings outshooting the Ducks in period one but playing one sloppy shift that cost them a goal. Corey Perry took the puck into the zone and had Derek Forbort wave at him. He went around the net and spotted Nick Ritchie in the slot. Perry dished the puck over to him and a standing-still Nick Shore kind of got back to Ritchie. Meanwhile, there was waving Forbort again, but Ritchie shot between the two of them and got his third of the season.

The Kings were better than the Ducks in the second period, as far as chances went. They moved he puck well, but the Ducks were better in front of their own net than they have been of late, collapsing and blocking shots to help out reserve netminder Ryan Miller

Pearson broke down with Toffoli about mid-period, the former going to the net while the latter dished a puck over from the boards. It went under Pearson’s stick essentially in the crease.

Late in the second, the Ducks held the Kings in the LA end for a long shift, the Kopitar line defending. The pressure forced the Kings to take a penalty in the form of MacDermid going off for hooking.

The Kings killed that, then had their own chance, Fowler of the Ducks getting called for slashing. There were only 22 seconds left in the period. In fact, the Kings had an excellent chance with the referee’s arm raised for the delayed call. Nick Shore took the puck down the left side with Pearson skating at stride. He dished the puck to the slot for Pearson, who flicked a shot at Miller. The save was made, but Pearson crashed into the crease once again, ending up essentially inside the net.

The momentum hadn’t exactly swung, because the Ducks were still carrying things, but the penalty started a tilt in the Kings’ direction. Would it continue into period three?

No. The Ducks killed the penalty without a shot being fired on net. They then took over, forcing Quick to make several good saves over the first six minutes of the period. Two impressed: the first was a drop pass to Cogliano who passed over to Silfverberg in the crease. The puck was redirected how, and Quick made a leg save. Somehow the rebound was bounced back in on net. Quick got a blocker on it along the ice.

The second was a loose puck directly in front of the net to Derek Grant. Quick stood tall, and the puck went up high and wide.

And things looked to be done for the Kings. The Ducks had most of the play in their offensive end as the period wore on. But Dustin Brown took a puck around the net and tried a low shot. Miller made the save lying on the goal line. He kicked out his back—far—leg and put the puck back to Brown. Bad luck or mistake, who knows? And Brown put it high in the empty top part of the cage.

1-1. There were less than two minutes to go.

What a shame for a Ducks squad that was missing Rakell, just the newest injury to add to their hospital-ward level of problems.

The game went to a shootout in spite of an OT power play in favor of the Kings. The Ducks had the advantage but then it was evened up in the third round. The fourth went to the Kings, who shot first.

Game over. A point for Anaheim, two for LA, and each team headed out to the road.

Coach Carlyle tried to put a positive spin on the loss, praising the “compete level” and saying, “We were proud of our work ethic tonight.”

They should have been. Though Miller got more shots than Quick, as has been usual for the Ducks, the shots he faced were rarely dangerous. He held his team in the lead, in other words, without having to make the spectacular stops that John Gibson has had to make of late.

Goaltender Miller said, “The intensity was there. We were engaged from the puck drop.” That’s something that the team in the form of Vatanen said was missing Friday versus the Jets.

Notes: Rickard Rakell will not travel to Chicago with the team Sunday. His upper body injury did not happen against the Jets. It is a lingering issue.