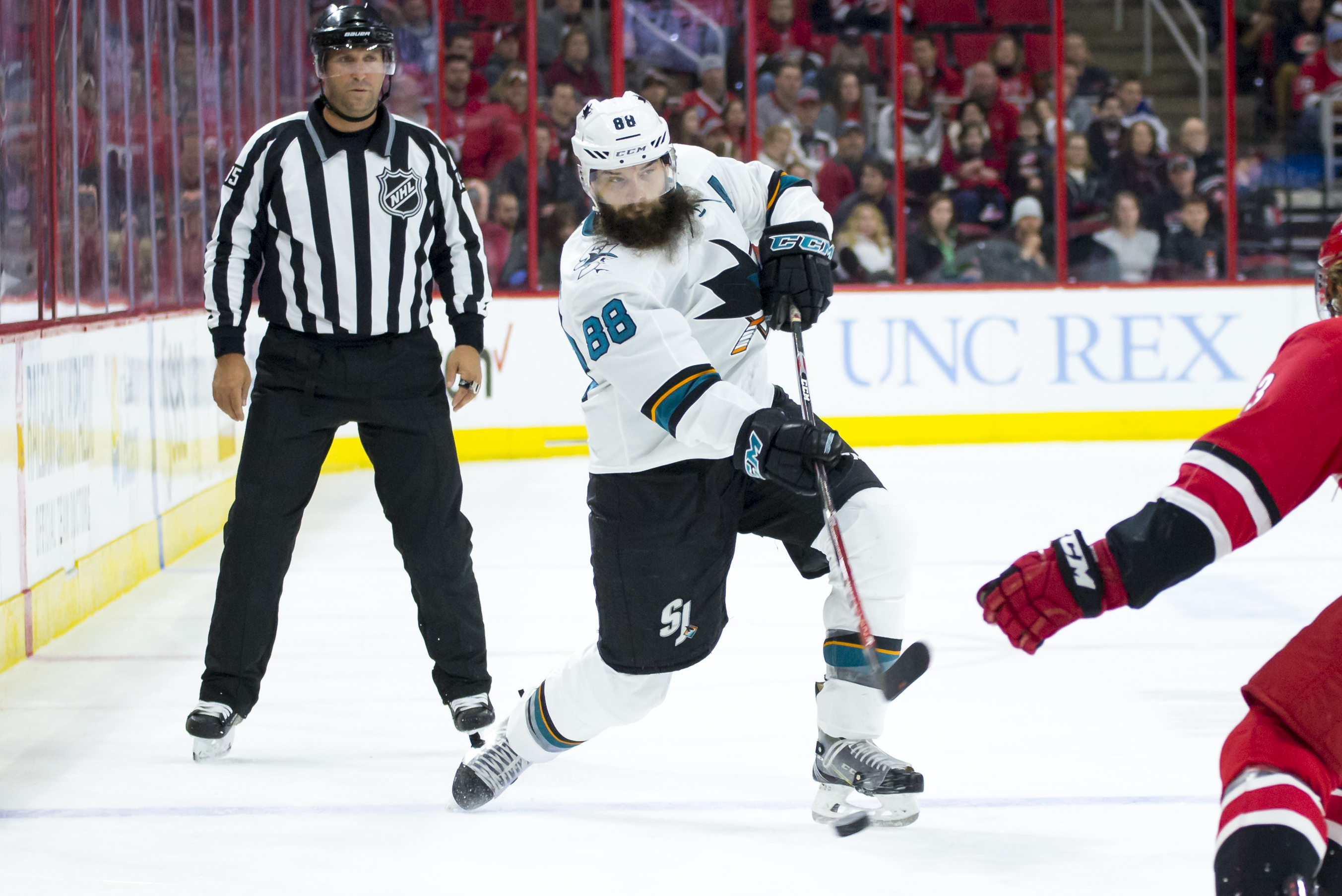 Patrick Marleau tied Jaromir Jagr for games played, third overall, at 1733 on Saturday night. This happened when he took his first shift in the Ducks-San Jose game which kicked off at 7pm local time in an empty  Honda Center. Other story lines? The Ducks were still missing their captain, Getzlaf, out with a lower-body injury. Further, neither Devin Dubnyk  nor John Gibson, the netminder starters, had won a game yet this year.

The contest developed into a typically entertaining, rather-no-defense style of game, fun to watch, but hard to predict. Watchers of both sides did, however, learn some things.

1. The Ducks just can’t start well. Remember last week’s 3-0 deficit with just over two minutes gone? They reprised it by allowing a goal at 11 seconds on Saturday versus San Jose. It wasn’t some miraculous breakaway; it was a greasy goal off a  slapshot from the point that sneaked through the goalie’s legs and was there to be poked in by  a trailing player. No excuses for that.

2. The kids are going, finally. You already know about Max Comtois, because you read my story  on last’s night’s Ducks’ game. But on this night, a new Duck scored his first NHL goal.

It wasn’t exactly pretty, but Isac Lundestrom will take it. He was in front of the net for a Lindholm shot, jumped up out of the way, and put the puck in off his stick. It was kinda about  time, with the player in his 36th  NHL game, and if it wasn’t exactly a dream goal, Lundestrom would take it. “I never thought  I would score like that, jump in front of the net and it hits the stick, but  I’ll take that goal every day,” he explained.

“I want to be in front of the net a little bit more and take the  pucks there and get the  circles going. Of course it’s nice for myself to get the first one,” he said. “Of course you want to score goals and help the team that way . . .  and finally I scored, so I just gotta keep moving from here,” was his summary of his play. “The coaches is always pushing me to shoot more and get in front of the net.”

Heinen was also dangerous. He came to the Ducks for Nick Ritchie, from Boston. And on this night, he launched two missiles to Dubnyk in the first period, point-blank on the doorstep. He was also dangerous late in the going, as was Lundestrom, who took an inside-out shot in period three that went off the  post.

Ducks’ coach Eakins has been much in favor of Heinen in his comments of late. The 25 year-old’s  shot total was four, second  only  to Rakell’s six on the Anaheim side for the night.

3. Adam Henrique is back. He was scratched last week, an embarrassment to be sure but Eakins’ way of getting his veterans to get into gear after contributing  essentially  nothing in the  early part of the  campaign. He got a goal last night, and added nothing in terms or goals, assists, or even shots on Saturday, but he was visible. He got to the front of the net repeatedly, including one time in the second period  when he stood in, got speared in  the groin by Radim Simek, got cross-checked in the chops by the  same guy, and wrestled  him to the ground in an attempt at a fight. The penalties evened out, but this is cleaerly not over.

Some advice for Mr. Simek—this ain’t the Czech league. You’re gonna pay for crap like what you did to Henrique. Look up “the code” in your English dictionary. If you’re picture’s there, you’re in trouble.

Henrique, by the way, was eating cake for his 31stbirthday on this day, or perhaps somehow celebrating in another, more healthy  way. He’s pretty  fit.

4. The first line is what it is. Derek Grant centered it in Getzlaf’s absence, with the wings going to Rakell and Max Comtois. Grant is the one who went to Philly last year to add some toughness to the Flyers’ playoff lineup. How is it that he now gets day into the first-line center position? Because he can skate, and he wins faceoffs. On that score, he was 9-4 Saturday night, or 69%.

The Ducks were happy about an eventual 2-1 win, in the shootout, which went the standard three rounds.

The Ducks outshot the Sharks 33-27. One of their mantras has been, especially for  the young guys, don’t pass  up shots.

“As long as the game went, we kept getting better and better” Lundestrom summed up nicely.

The Ducks had excellent power play  pressure, but no scoring, and their coach said after, “Our guys, instead of on the bench sinking and deflating, they  were still encouraging each  other, and even making some jokes about  it, because some, that’s all  you can do is shake your  head and laugh like how did that not go in?”

They got the first shootout goal, were matched by  San Jose, got the second, and then it was all saves from there for both netminders. Devan Dubnyk took the loss.

Ryan Miller recorded his 388thwin in the Anaheim net. One more and he ties Dominic Hasek for all-time NHL wins. They will mutually occupy 14thplace overall. “He was very good right through the game, very solid, and very calming back there,” his coach said after the game. “Obviously knocking down that extra point for us is excellent.”