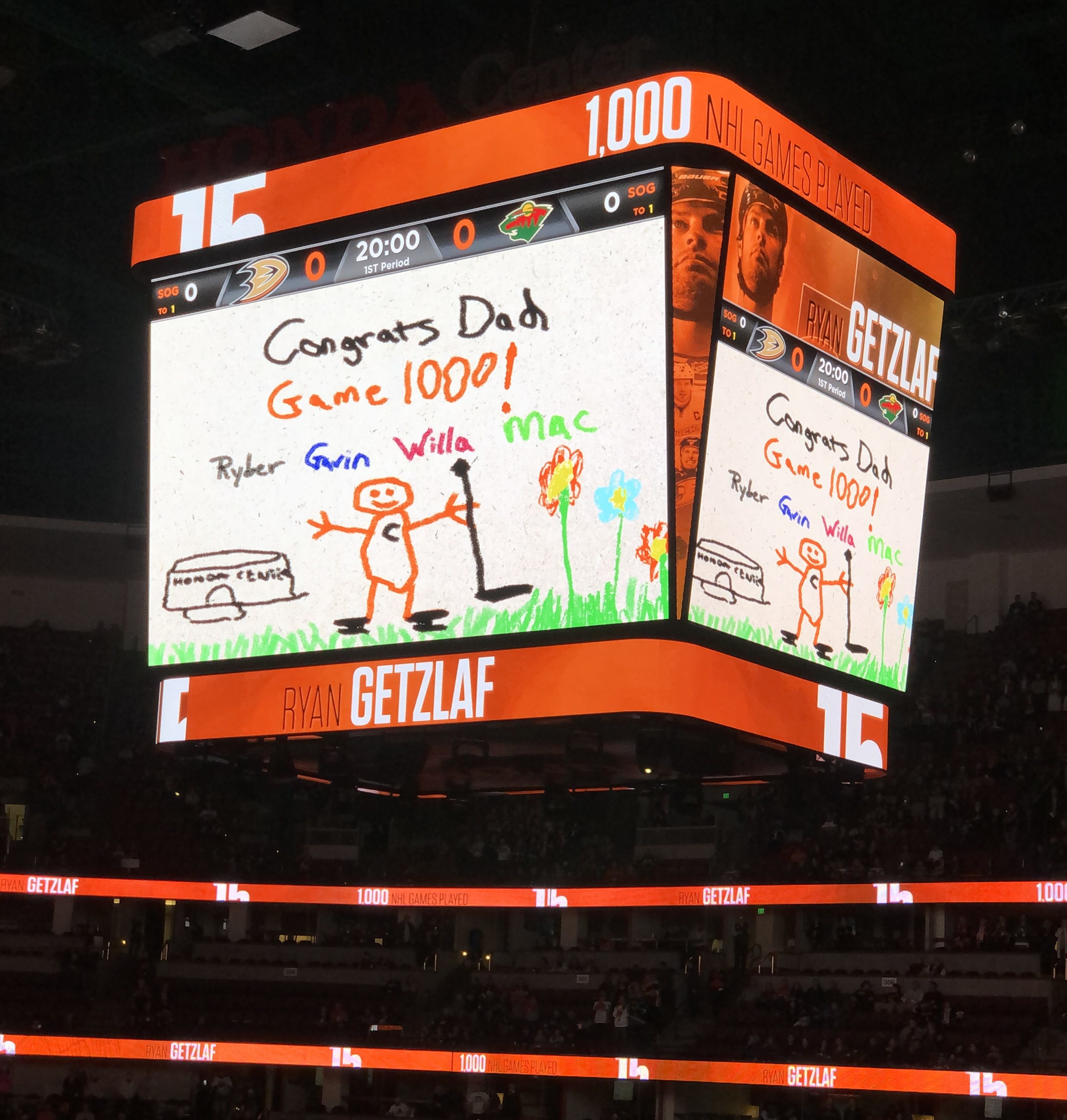 If nothing-nothing can be interesting, then period one in Anaheim on Tuesday night with the Wild in town was fascinating.

The Ducks have said they want to start faster. They said that Friday. They did it Sunday. They still found themselves down 2-0 to Chicago and had to crawl back to get a point before losing in OT. But Tuesday evening, after having seen their captain, Ryan Getzlaf, awarded a silver stick and other goodies for having played in his 1,000th game, fans in SoCal were treated to an initial surge by the Ducks. The driver of this was the newly shaken up first line of Max Comtois, Ryan Getzlaf, and Troy Terry.

The thing was, for all their energy, the Ducks got no shots, and the next thing you knew, it was 5-0 in favor of the Wild on the shot clock. That’s when a long surge began. No penalties, no icing, the two teams cruised right through the usual ten minute mark TV break and got down to about eight before the whistle blew.

Anaheim made good work of it, as they ran away to an 8-5 advantage in shots. What finally got play stopped was goalie Alex Stalock coming way out of his crease and covering a puck to earn himself a delay of game penalty.

Didn’t help the Ducks any. They have an awful PP, 29thin the league coming into the night, at 10%. Minnesota’s is better, but still just marginal when compared to the rest of the league. Almost as soon as the Ducks’ advantage ended, Ryan Getzlaf took a hooking penalty in the offensive zone (some example for the youth) and the Wild’s PP went to work. They didn’t improve on their rating, which was a respectable 19.2% prior but mired at 18th against the league.

The first period ended with the shots in the Ducks’ favor, 10-7, which is a marked improvement over what they have been notching in games prior.

With all that celebration and flurry, you might not realize how different the Anaheim lineup was from just Sunday night.

Two players came in and two went out, but that’s hardly the sum of it. In was Ondrej Kase, exchanged more or less for Devin Shore. In was Max Jones, and out was Nicolas Deslauriers. But it was the mixing of lines that was interesting.

Line one had been Nick Ritchie on the left, Getzlaf, and Max Comtois on right. Comtois switched to left, Ritchie dropped to line three, and Troy Terry came up from line three.

Line two had been the Rakell-Henrique-Silfverberg trio, a line which many people viewed as the number one in any case. Well, the wings stayed the same, but Henrique dropped down to line three to center Ritchie on the left and the renewed Kase on the right. Sam Steel became the line two center.

Does this make sense? Well, it would have been the easy thing to slot Kase in on line one on right wing and shift Comtois to left, with Getzlaf centering, and leave everything else alone. The fact that Eakins took the plunge to shake up lines one, two, and three says something.

Kase was most noticeable of his line, and of the Ducks, in the early going. His coach would later comment, “I thought Ondrej was very good coming back into the lineup like that. What he does he does.”

Line four saw the small change of Jones coming in and Deslauriers sitting.

The payoff didn’t come early, as detailed above, but in period two, in rapid succession—two goals and a near miss. The goals were so close to each other that announcer Phil Hewlitt hadn’t had time to finish the first before he was again saying, “Anaheim Ducks goal.”

The first one was all Rakell. He cruised across the slot and took a shot that was stopped with the leg, then bounced off the post, and went right back to Rakell’s stick. He put it in to the open top half of the net.

The second one was a floated from the blueline that went through a pair of players, one from each team, on the way into the net. It was shot, and scored, by Jacob Larsson, his first of the year and first NHL career goal. Kase was the Ducks player in front.

And the near miss: just after that second goal, Derek Grant put a puck to Max Jones that could have gone in but failed. The Ducks then killed their momentum with a tripping penalty taken by Korbinian Holzer.

Taking stock of the second period, at the two-thirds left mark, 11:28 to go, the shots were Ducks 16, Wild 14. The Wild shortly thereafter scored their first goal. It was the product of manic passing all over the zone, a beautiful display. If assists were handed out past two, there would have been about five on this score. It finally went from Spurgeon to Suter to Kevin Fiala, who was spotted by Suter from the left hash marks. He put the puck across the slot and through some bodies, and Fiala fired a wrister that hit Gibson’s catching glove as he came over from his right to his left to try to catch up with the puck. He was also going down, and the puck glanced off the top of his trapper and flew into the top of the net.

The Wild kept at it, forcing a save out of Gibson’s gut but not being able to get to the rebound. That brings us to the next check-up point—two-thirds gone in the period. The Ducks at this point could be best described as standing and reaching. The Wild ran the offense. The shots, which had been plus-two in the Ducks’ favor, now were Wild 18, Ducks 16. Four unanswered shots through the middle of the period, in other words.

The Ducks weren’t done. Comtois had a chance where he took a weak shot that nonetheless hit the defenseman and took an odd bounce and was barely saved by Stalock. It hit the goalie, then the post.

The Ducks ended period two on the power play for 40.1 seconds, with the obvious promise of more to come when the third period, with its clean sheet of ice, arrived. They were up 2-1. What could go wrong?

Asking that is asking for it, and before the third period was very far along, the score was 3-2. The first one came when a Ducks player (Rakell) gave the puck away, passing blindly into the slot. Joel Eriksson Ek grabbed it and spotted Zuccarello coming out of the penalty box. Perfect strike to him, and he was away, shading to the left of the ice as he bore down on Gibson. He basically just fired it right past the goalie, left side of the net. Gibson was on his knees, dead to rights.

Anyway, tie game. The next one was a hard-working goal scored off a long cycle play that eventually saw the puck go to Eric Staal in the front of the net. He took two swipes at it and put it in for his fifth of the season. The Ducks hadn’t collapsed, but they weren’t doing much, either.

Their coach would later blame their loss on guys taking long shifts. This was particularly true of the giveaway artist who set up Minnesota’s second goal. That would be Rakell.

He also commented on his boo-boo: “Kind of felt like we gave them their goals, especially when we had that power play. I got to know the time better, and know they’ve got a guy coming out of the box and not force that play in the middle. Other than that, we played a good game. We were hungry on the puck and hungry on the forecheck.”

Eakins said, “On the shorthanded one, we were out there a little too long and tried to force the play. It’s as simple as that. Those are self-inflicted wounds. You can play as well as you want, but if you’re going to self-inflict, it’s not going to go your way.”

There’s no particular excuse. The team has been at home for a week, albeit they’ve played four games in that time. Eakins pointed to fatigue, and later when prompted said that was both physical and mental. He said that it would be good to rest, but that they weren’t focused on that as much as getting in some good practice now that they don’t play until Sunday.

“The one thing I have felt over the last week is we are a tired team. I think we’ve been kind of hanging on by a thread, and we need some much-needed practice time.” Eakins added, “We started staying long on shifts. I thought there were four or five times in the second period that we were caught out there. Fatigue makes cowards of us all. It doesn’t take much to put pressure on a group that can’t breathe. That’s what we did to them in the first, and the tides changed in the second when we were getting caught out there way too long.”

All that’s fine, but one wonders whether the line juggling made for some unfamiliar feelings. Thus Eakins also has to take some responsibility. The lines were shaken and stirred. Why so much change is his to say, but from the observer’s point of view, maybe it was just too much.

First goal, big thrill: Larsson said to IH that he had always hoped to score an NHL goal, but that he hadn’t dreamed it would be any certain way. He’s just glad that it went in, but like any good rookie who knows the code, he added that he wished the team had won.