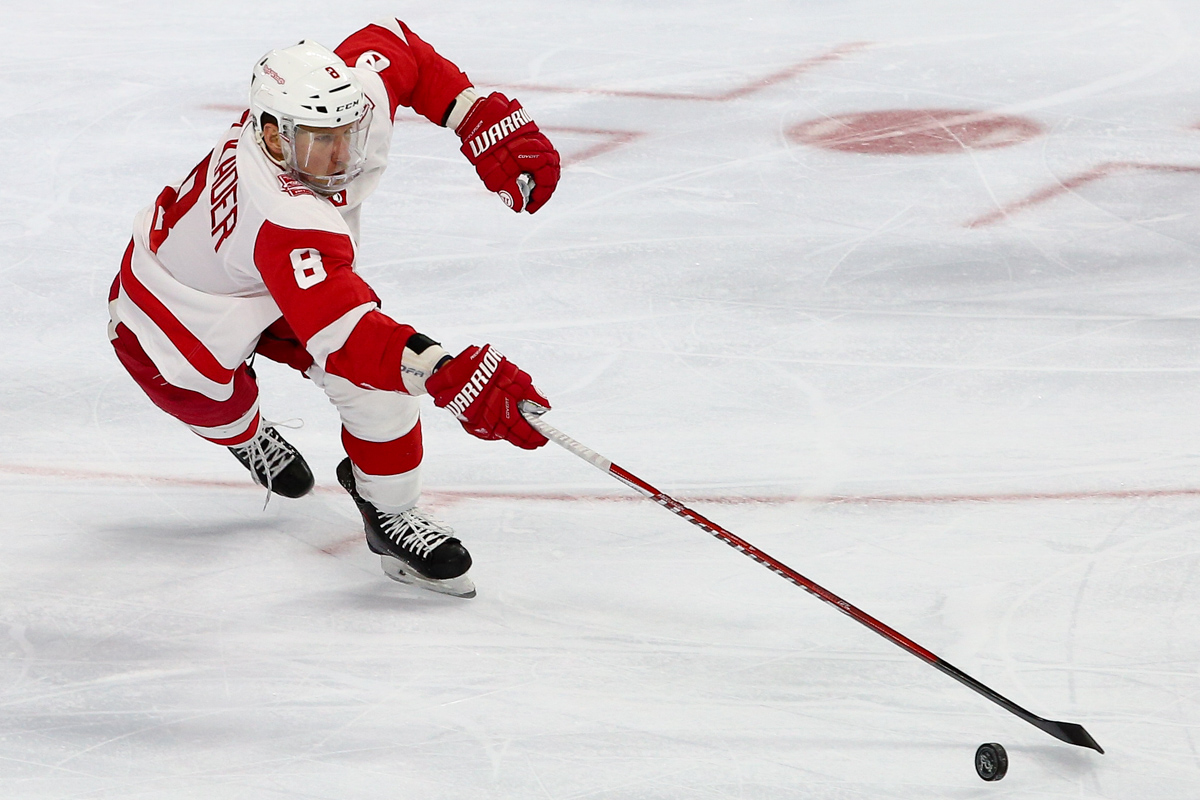 It might seem odd to say this. Perhaps even cruel. But here’s the analysis of the Detroit-Ducks game Friday night:

A bad team got a mediocre-but-still-hopeful team off its game by distracting them with taunts that led to fights and chippy play that led to penalties.

Now, if you didn’t know that the bad team was the Red Wings and the mediocre one the Ducks, you might imagine other actors in the scene than were there. But here’s who fought: Corey Perry and Justin Abdelkader. Ryan Kesler and Anthony Mantha. Each of these came after the Ducks player was hassled and sat upon or otherwise obstructed by players from Detroit’s side.  That was in period two.

For what? For nothing more than exactly that—distraction. While you’re using your energy watching and hoping your guy doesn’t get beat up, you’re largely not focused on what wins you games—scoring more goals than the other team.

There was a more proper and useful fight in period one, at least as it goes by today’s code. Nick Ritchie took on Luke Witkowski in period one after Witkowski hit Cam Fowler hard behind the Ducks’ net. Fowler hobbled off with a shoulder looking hurt but was soon back on the ice again.

Kesler later talked about how he feels when the game gets testy: “It’s fun. It’s a lot of fun. It’s old-time hockey, and the league’s turned pretty soft, so it’s fun when you have games like that.”

He described the play on Fowler. “That big guy with the beard, I don’t know his name, but he hit Cam, and that kind of started it, and it just kind of snowballed.”

Nick Ritchie avenged that after an appropriate time break.

If there’s one thing to say for Anaheim, it’s that they didn’t do what the Kings did the night before versus Detroit and simply stop shooting the puck. The Ducks started with nine in the first. Detroit had 11. The Ducks then doubled them up, 18-9, in period two. The score followed suit.

Jimmy Howard was in net for Detroit. He was sharp, but not perfect. He did exactly what the youngster Jared Coreau did in LA—left rebounds off the legs sit in front of him.

Perry’s goal was a classic. The puck came from the left boards to Getzlaf in front. He whacked a backhand to the open side where he knew Perry would soon be. The latter then slipped it past a fallen Howard.

Soon after that, Perry’s throwing down, and after that, the lines are a mess. Every one of the four was disrupted, which, if my above theory is correct, is likely exactly what the Red Wings wanted.

And it meant that nothing much happened during that six or seven minutes, punctuated by a period break, that the various offenders were in the box. All the lines were scrambled for Anaheim.

But, theories be darned, what happened on the first shift that the lines, and especially that of Silfverberg, Kesler, and Cogliano, were back together? They march down and score. Kesler got the puck as he cruised across the slot. He took a backhand, then a second, and the puck was up under the bar.

This cannot have been the plan. More like the Ducks got away with something, or proof that a not-very-good team is eventually, as happened Thursday night against the Kings, going to return to its level. Detroit’s doing just that, night after night.

And the Ducks are fortunate to be the receiving end of a win. They solidified that with Kesler’s goal. Now each line had tallied one, and none had come from the defense. The shots in the end were 36-30 for the Ducks.

The real story was the penalties. The Ducks took 25 minutes, the Wings 19. The shorthanded chances, fighting majors aside, were two for the Ducks, and five for the Red Wings.

Randy Carlyle talked about that after. “That’s important for us. It’s to stay disciplined. It’s not about the extra-curricular all the time. It’s about making sure we find a right way to energize ourselves.”

His team needs every point, and he and they know it. They got two versus Detroit. A better team, like New Jersey, coming in Sunday, might not be so easy.

“We’ve played them in our building, and we know what our strengths are. . . . They’ve got a lot of depth through their lineup.”

John Gibson is 8-2 in his last ten games.

Corey Perry has ten points in his last nine games.