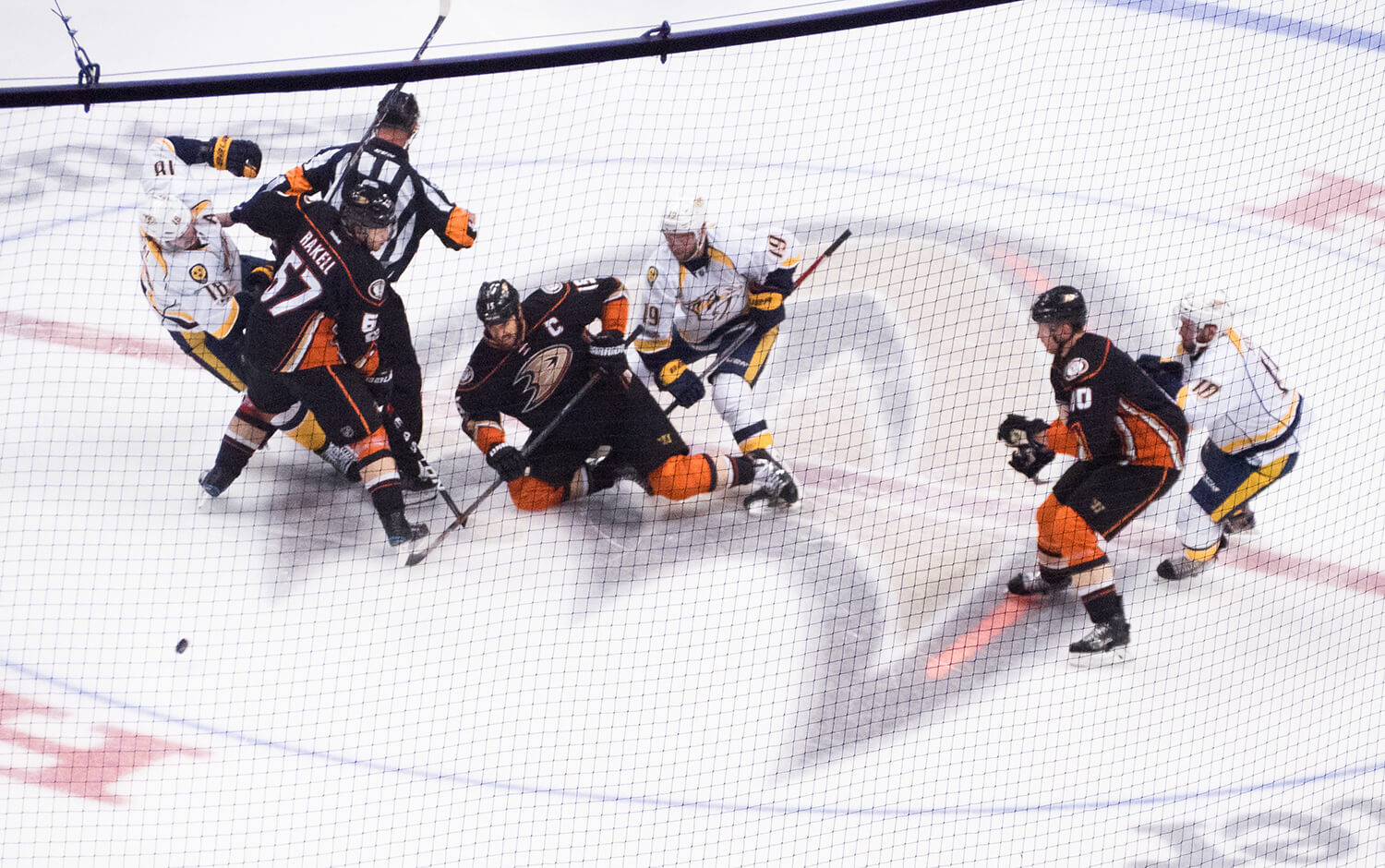 The story was supposed to write itself: the Predators would come in rested and confident, having dispatched the number one seed as well as another favorite in some minds. They wouldn’t have played since Sunday. And they’d be hungry, having never gone this deep in the playoffs before.

The Ducks, meanwhile, might still be reveling in their seven-game win over Edmonton, but with lively minds and tired bodies, they would come out flat. And if they didn’t get their two happy surprises back—those being Eaves and Bieksa—they wouldn’t be in great shape versus a Nashville team that has a mobile defense and at least one very good forward line.

Then again, were the Ducks going to play out the same “Kesler versus the stars” theme that they had enacted against Edmonton’s McDavid? And what about their defense? Without Bieksa, it might be youthful, but it would also be fast. They’d played their best against the Oilers when they had jumped up—way up—on the play, including when Vatanen fed Nick Ritchie for the series winner Wednesday night. If they could keep doing that, they would force the Nashville team to play on their heels. But would that youthful speed have survived the pounding dished out by Edmonton?

But as soon as you’re feeling sympathetic for the Ducks, don’t forget that the Predators let the Blues come back at least a little bit in their series, and that while they might be good and stingy on defense (mainly due to the last line—Rinne), they would also be a bit hungry on offense, having scored only 28 goals in the playoffs so far.

Sure, the argument is that when you don’t let many in, you don’t have to score a ton. But what if the Ducks scored early, putting them in need of goals of their own? Well, that’s exactly what happened. Anaheim had a goal at 5:15 of the first, in front of, oh, at least 10,000 people. It was like those pictures everyone’s always tweeting out in Florida and in Arizona of mostly empty stands.

Traffic. It’s the excuse for everything in this town, and while somehow it’s unusually light most Friday mornings, it’s ridiculously heavy in the late day to end the week. Add that to a 6pm start time, and you’ve got the recipe for late arrivals.

Those who had left work early got the pleasure of seeing Silfverberg grab a puck on the right side of the ice and fling it at the net, where it went over the shoulder of Rinne and in. Call it what you want, but there were people earlier in the season saying that if this guy was vulnerable in one place, this was it–high, and over the shoulders. The Ducks would be fully aware of that.

In fact, their second goal was similar, coming from the point off a faceoff, Lindholm shooting it high and in. But that wasn’t until Nashville had scored two of their own, one in period one and one early in P2. The Ducks’ tying marker came in the third, rather early—at 7:21.

The first Nashville goal was the result of a semi-poor change. Shea Theodore had broken his stick, and then the shift change as he went off took a long time to get five guys on the ice. The puck went to the point and was slapped to the net and in.

One thing the Ducks could take heart in was that there was very, very little crowd noise after this or the second goal. When Edmonton was in town last week, you’d almost think the home team scored, so great was the roar every time the Oilers tallied.

Anyway, the Ducks had it tied by that seven-plus minute mark in the third. Had they weathered the Nashville energy to survive? Well, they did some good things, none more important than killing off a five-on-three that lasted nearly a minute and a half in period three. It came after both Getzlaf and Thompson flung pucks over the glass to delay the game.

The kill was down to one person: Ryan Kesler. Twice, he went to a knee to block shots, bravely, sacrificially. The crowd, by this point well filled out and just short of occupying every seat (a sellout was announced), roared. It was real! Their team was doing it! Carlyle said after the game, “That got our players excited. It got our people, it got the building excited. Usually when those kind of things happen, you can take that energy and roll through the rest of the hockey game. I thought we did that, despite the goal in overtime.”

The Ducks built on this kill, mostly because Gibson continued to be great. He saved one off his mask, from Neal. His team then got the advantage of a penalty of their own. Their best shot came when Cogliano launched one off Rinne’s mask, so that each goalie had a headshot against him. But the Ducks didn’t score again, despite a pressing shift with about 20 seconds to go.

The teams went to OT. The Ducks had faced 39 shots and let two in. The Preds had faced 27 shots, same result. So it seemed that the Ducks were going to survive the quick turnaround after all, as they forced the game to OT, where they often, for whatever reason are the recipients of a break.

Nothing happened early in the period. But just short of midway, James Neal won it for them when he shot a one-timer past Gibson off a pass from PK Subban. It was the 46th Nashville shot of the evening. The Ducks would end with 29.

So Anaheim lost, and Nashville had its third game-one win in a row on enemy ice. When asked about that after the game, their coach was both pleased and cautious: “I think we realize that we have to win on the road. We don’t have home ice. Today was a game when we came up really well. They pushed back and we pushed back on them. We didn’t play really well in the third, but then things went our way again.”

Their players, Rinne and Neal, who were made available to the media, said that they were pleased with events. Rinne explained the success as a result of “preparation, just getting ready for the series. Knowing that it’s a huge game, the first, and knowing that we played them all on the road. I thought that we played a really strong game.”

Neal said it was a physical game, but “nothing we didn’t expect.” The Ducks did pound away at Nashville, starting early. When it was 2-1, it looked like the Anaheim strategy was to make Nashville pay and slow them down for the next game. That the Ducks ended up tied and taking it to OT was a nice bonus.

So it’s not unlikely that the Ducks will win Sunday. They’ve got to, because they’re not going to pull out too many more series wins if what they have to build off of is two home losses.

The game Sunday is at 4:30. Traffic shouldn’t be all that bad on that day. But then again, it’s Mother’s Day. Great. Guess it’ll be best to leave the house before two. Maybe even shortly after one.

Looking towards that game, Carlyle said, “I don’t think that we can afford to have the start that we had today. I think that the scoring chances, if you took the first period out of it . . . we were pretty inept in what we were doing. We were receiving the game, and our goaltender should get full credit for keeping us in the game. Sunday, we’ll regroup, and we’ll turn the page on this one and get ourselves prepared for Sunday afternoon.