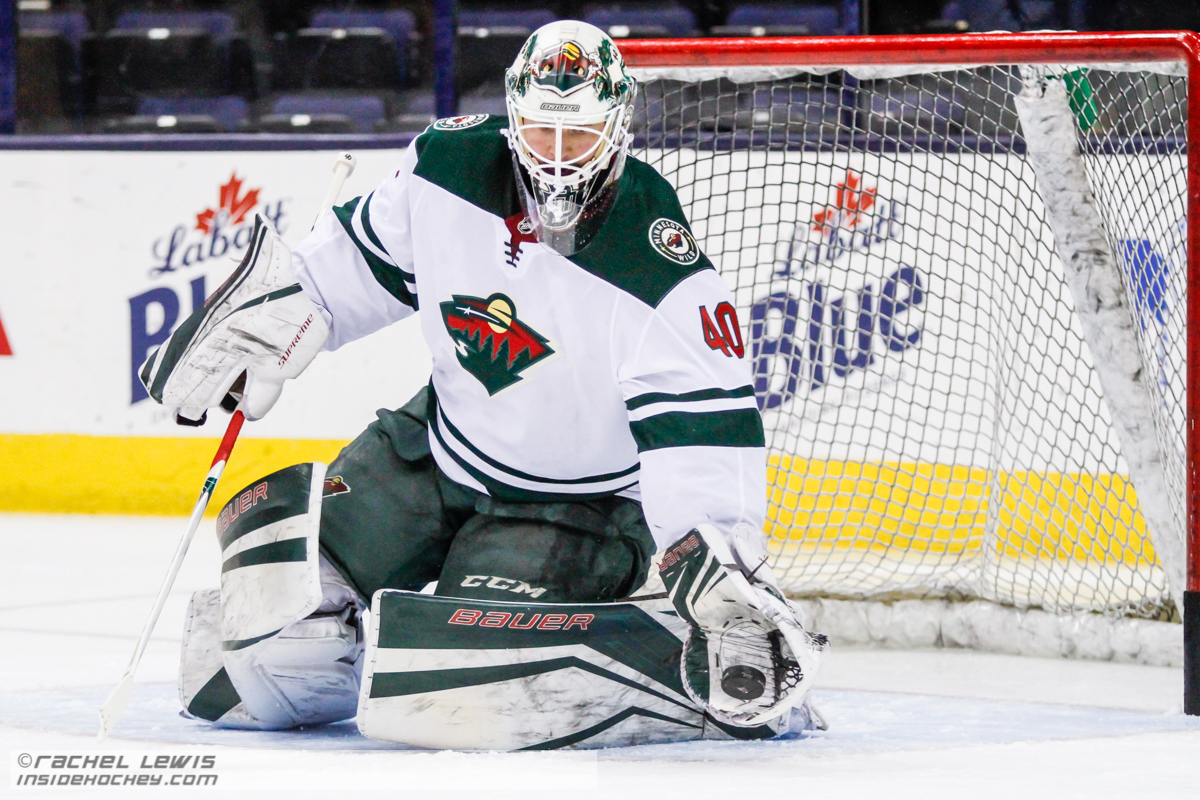 Devan Dubnyk (MIN - 40) makes a glove save during warmups.

The Ducks are currently missing Cam Fowler (nine games) and Hampus Lindholm (five games). Josh Manson was recently also hurt (two games) but is back. In the lineup was Jani Hakanpaa, who was playing his third game of the year and third of his career. He is Finnish, and he has been with the Ducks’ AHL squad in San Diego this season. He is old-ish for a rookie, at 27.

At the time of his recall, Hakanpaa was second amongst Gulls’ defensemen with a +12 and third in games played, with 47. He had one goal and 12 assists. In his AHL career, he has 179 games played with 33 points (7 goals).

Also in are Max Jones (who had been on IR on a day-to-day basis and missed one game), and David Backes, finally in the lineup as of a week ago after being traded from Boston. He played two games, sat one, and was in on Sunday with the Wild in town.

Also out, John Gibson, who is said to have suffered a groin muscle spasm near the end of the Ducks’ 2-1 win over the Maple Leafs on Friday. Starting in goal on Sunday was Ryan Miller. Miller played the last nine-plus minutes in that Leafs’ game. Backing him up was Anthony Stolarz, who had not played this year but had 25 prior NHL games, with two shutouts.

Minnesota was coming off a frustrating loss, 7-3, Saturday in LA. Funny enough, both the Kings and the Ducks have been beating good teams of late, after they themselves are roundly out of the playoffs.

The Wild’s Alex Stalock got no help Saturday in allowing six goals (one, the sixth on the game for the Kings, was empty net). By the seventh of the game, he appeared roundly disinterested, waving at a puck that sped right by him. Sunday, the Wild had Devan Dubnyk in the cage. He  had been out for seven straight games and all but two of the last 13 on the Wild schedule.

Dubnyk is 20-11-4 thus far this year (entering Sunday), and he sports a less than .900 save percentage. Not a hopeful sign if this team wants the playoffs, and they still do—marginally.

Saturday, they came in two spots out of third in the Central Division and one point out of the second West wildcard spot. Sunday, having dropped the game Saturday, they entered in sixth in the Central, though just a point behind both Nashville and Winnipeg, but also fourth in the wildcard, with Winnipeg having jumped them. Minnesota had 75 points, and the three holding the wildcard and two spots below that were on 76.

If yesterday mattered, then, for the Wild, today (Sunday) mattered more. They didn’t show it right off. The Ducks came out hard, and Minnesota retreated. The Ducks were largely ineffectual, even with an early power play. They would eventually enjoy three in the opening period, though the last started with just 24 seconds left in the frame.

The Ducks did score first, however, Silfverberg converting from Rakell and Larsson at about 11 minutes. The Wild would exit the period with a 2-1 lead, however, after Minnesota got one at regular strength and one on the power play.

The first Minnesota goal the Ducks protested, claiming goalie interference. It did seem that Alex Galchenyuk pushed Miller’s foot and kept him from going right-to-left across the crease to get to the shot. This because Galchenyuk was rushing with Zuccarello, and the pass was supposed to come across. Galchenyuk never got the puck, but he got the pad, it appeared. The appeal was denied, and the Ducks took a penalty for delay of game. The Wild scored on that PP, making what would have been 1-0 Anaheim into 2-1 Wild.

The Ducks responded later, getting two goals in period two within three minutes of each other. The first of those was Danton Heinan, recently acquired from Boston for Nick Ritchie. The second was again Silfverberg from Rakell. This time, no secondary assist. So the second period ended 3-2 for Anaheim.

In the midst of all this, the game got a bit nasty. Near the end of the first period, Getzlaf, the Ducks’ captain, fought (it was a bit hold-on-y, but that’s OK) Jordan Greenway. They started period two in the penalty box. The end of the second saw Getzlaf and Greg Pateryn tangled up at center. A few other players did the grab-and-hold. The linesmen separated them, but the scrum gathered again.

It was a bit of a showdown to see who would exit the ice first. Players from each side stayed on. The staredown went on. The last two people off the ice were the goalies. Ryan Miller finally relented and left first, after there had been four or five Wild players on the ice and three Ducks.

The Ducks’ Miller allowed two soft goals, including the third, to tie the game early in period three. The first of the softies was up and over his catching glove, the second Minnesota goal overall. The second was their goal to tie the game at threes. This one was Victor Rask floating across the slot. He used a screen to hide the puck, but didn’t shoot until he was in view of Miller, to Miller’s right. He shot and it went right past the goalie’s blocker side.

So the game went to the middle of period three at threes, with the shots in favor of Minnesota by one, 23-22.

Each team had good chances in the third. The best for Minnesota before their go-ahead fourth goal was Donato, Koivu, and Ryan Hartman creating havoc and getting a couple of close chances. For the Ducks, it was Silfverberg getting a puck to the net but the goalie being in place to stop it. Then the trio of Max Jones, Sam Steel, and Kiefer Sherwood crashed the net but saw the puck elude them and get covered.

The fourth goal was a turnover by the Ducks that Galchenyuk had come to him in the high slot. He whirled and flung a shot that eluded a slightly sleeping Miller. The goal was unassisted.

And the nastiness continued. A scrum after a play had Nick DesLauriers, the resident goon in Anaheim these days, challenge Greenaway after a play concluded with a crowd of players grabbing each other’s jerseys. They kept up the staredown even as DesLauriers refused to leave the ice. He was finally on the bench, still barking, with Greenaway standing on the center line outside the Minnesota bench with his butt facing DesLauriers. Probably not a good move for his future safety.

So it looked like this would end 4-3 and the Ducks would be happy to have hung in there. No chance. They pulled Miller with 2:08 left to go, and the Henrique line thrashing away in the offensive zone.

As it turned out, it was Christian Djoos who tied it. Silfverberg got a pass from Rakell and did a nifty spin move before dishing it to a pinching Djoos. He buried the puck.

OT proceeded almost four minutes with no whistle. Then there was one, and another, the second for a penalty on the Ducks’ Manson, for tripping. A quick faceoff and three passes later, and the Wild had themselves two points. Kevin Fiala scored the goal, his second of the night.

After the game, Dubnyk said, “It was difficult. I felt like I hadn’t played in two weeks (he hasn’t) and halfway through the game, I still felt like I hadn’t played in two weeks.” He admitted later that at least one goal was not good, but said he doesn’t care anymore what people feel about the goals against him. “You try to battle through and find a way, and I was able to contribute a little bit in the third. It would have been nice to come up with a save to win in regulation,” at the end of P3, he added. He said the third period turnaround came because, “We weren’t giving up much. We felt good about our game. We talked about how much we needed the two points and we’ve got to bear down and go at them.” He said that the team has worked on this basis for a long time.

Coach Dean Evason said after, “We forget that the other team wants to play too. They pushed, and we weathered the storm. The guys stuck together. They played hard. They’re [the Ducks] NHL players and they try to play, too. We decided to simplify the game, get pucks deep, not give them momentum and turn the puck over. Not only the coaches were talking like that, the players were talking like that. We got away with the game not getting away from us, and we were able to regroup in the second and third and we thought we played a terrific third period.”

Gibson is expected to be OK to play on Tuesday night, when the Ducks take on the Ottawa Senators.

The Ducks also play Wednesday, versus St. Louis. It is a makeup game for one cancelled due to the collapse of Blues’ defenseman Bouwmeester. The game didn’t get through one period, but the score was 1-1. It will resume at 1-1, but a full sixty minutes will be played.

The Wild now have to sit and wait while others play. They don’t see the ice again until Thursday, with Vegas in town.