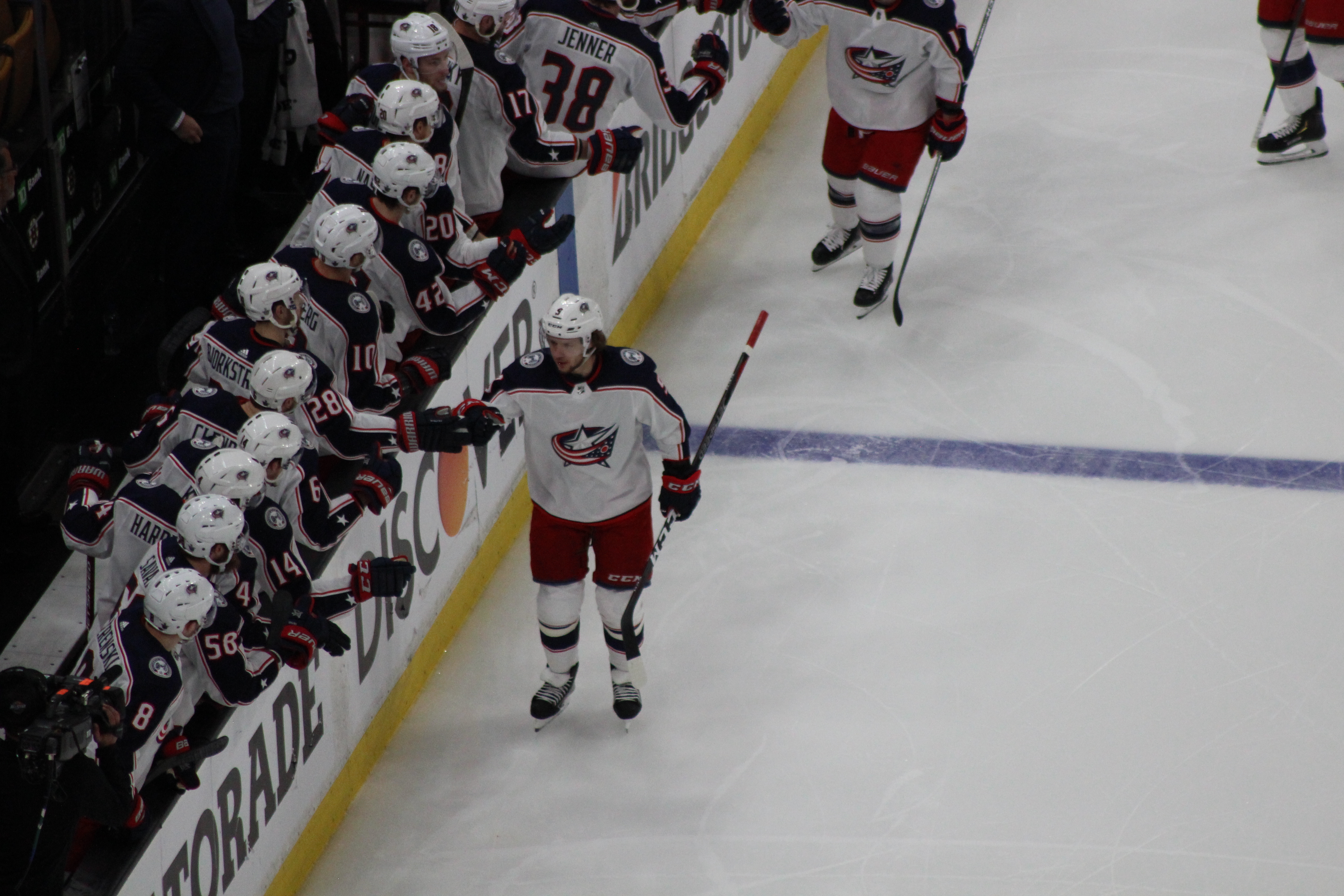 TD Garden, Boston, MA. — Forward Matt Duchene banged home an Artemi Panarin rebound through the legs of Tuukka Rask at 3:42 of double overtime giving the Blue Jackets a 3-2 win and sending the series back to Columbus tied at one. The Blue Jackets second power play goal of the night came just after midnight. The sellout TD Garden crowd was treated to a classic Stanley Cup Playoff battle that featured outstanding goaltending from both Rask (38 saves) and Sergei Bobrovsky.

The opening face-off brought forth an onslaught of crushing checks as the Bruins looked to establish their physicality over Columbus early. Zdeno Chara hammered Riley Nash in the neutral zone sending the message. Boston was all over the Blue Jackets to start the game. Just as the visitors started to generate some offensive zone pressure, Josh Anderson was called for Interference at 6:29. The Bruins power play came through when Charlestown native Matt Grzelyck blasted a slap shot from the top of the left circle past Bobrovsky for the 1-0 lead at 7:50.

Columbus responded with a flurry of shots on Rask, but the Finn was continuing his solid play. The Bruins were able to clear away any rebounds that Rask was unable to cover-up. The physical play of Boston was on full display as Charlie Coyle went full beast mode in the corner to Bobrovsky’s right, taking on two Blue Jacket defenders as he tried to maintain possession of the puck. Despite outshooting Boston 9-6 for the opening period the Blue Jackets were being outplayed by the Bruins. The period ended with a tussle in the Boston corner that resulted in a Brad Marchand Cross-Checking penalty at 20:00.

Columbus came out flying to open the second period, throwing their weight around. A fresh sheet of ice and the power play led to the Blue Jackets tying the game when Panarin fired a slap shot from the left circle past Rask just 1:03 into the period. The Bruins would answer just a minute later as Coyle wrapped around the Columbus net and fired a pass out front that bounced off of someone and in at 2:01. Initially he goal was credited to Coyle but it was subsequently changed to David Pastrnak for his third of the playoffs. Chara was whistled for Tripping at 6:36 giving Columbus the man advantage. That would be nullified at 7:37 when Anderson was called for his second penalty of the game. This one was a 4:00 penalty for High-Sticking when he drew blood on Sean Kuraly.

For the second straight game an errant Coyle pass in the Bruins zone would led to a Blue Jackets goal. Coyle passed the puck blindly out from the corner right to the stick of Seth Jones, who dished to Panarin, who ripped his second goal of the game past Rask. The Bruins power play was unable to capitalize on their man advantage. Again, Columbus outshot the Bruins, 10-7 for the period.

After three periods Columbus was outshooting Boston 26-21. Each team had scoring chances in the third period but Rask and Bobrovsky were flashing their Vezina credentials keeping this one tied at 2-2.

The first overtime seen each team get 10 shots on net. Rask robbed Nick Foligno when he gloved the forward’s shot out of the air while laying on his belly. Bobrovsky snuffed out numerous quality chances on Patrice Bergeron.

The final shots on goal tally was 41-31 Columbus.

After the game Blue Jackets Coach John Tortorella was pleased to be leaving Boston on a high note.

His counterpart for Boston, Bruce Cassidy was pleased with his team’s play but not the result. He’d like to see less turnovers from his club.

“At the end of the day, all three goals they scored we had the puck on our stick,” said the third year coach. “The PK [penalty kill] one we didn’t get a clear. They rotate around the first goal by Panarin. The second one by Panarin clearly a miscommunication turnover deep in our end. Then on the last one we did have a chance to clear, they just kept it in. We had a breakdown in our PK structure.”