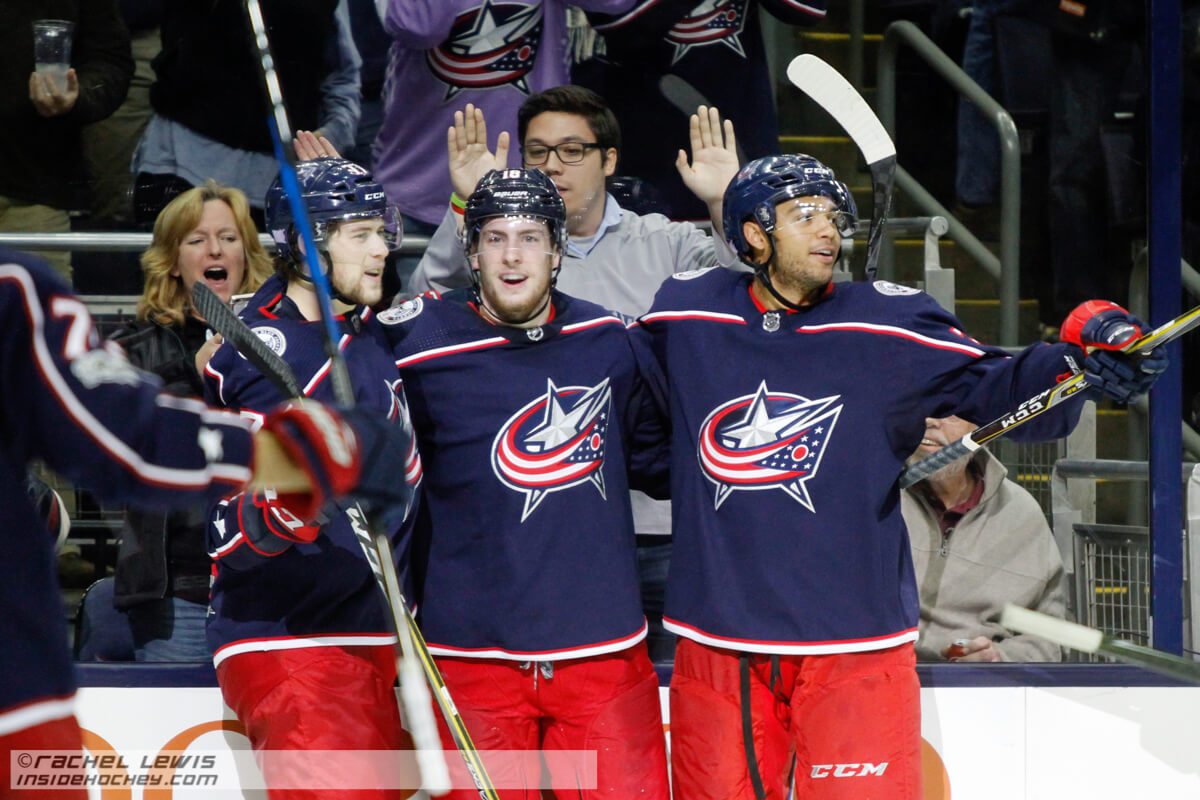 It might’ve been when Auston Matthews scored the opening goal on Tuesday en route to a 3-0 win to even the series for the Leafs. Or, it could’ve  been at the hotel, when a scroll through Twitter would show what everyone was watching–the center and his coach publicly sparing on the bench. Maybe it was Cody Ceci’s shorthanded goal late in the first on Thursday, kickstarting Toronto’s second period offense to go ahead by three.

Whatever it was, Pierre-Luc Dubois flicked the switch in the second period of game three and despite working overtime, it didn’t turn off.

After William Nylander and Nick Robertson filled Columbus’ net twice in the period’s first 8:48, John Tortorella swapped netminder, Joonas Korpisalo for Elvis Merzlikins. But after failing to execute on a power play, the 22-year-old center took advantage of some space, sending a loose puck to Zach Werenski, who returned it through traffic to an open Dubois to inject some life into the Blue Jackets ahead of the final 20:00 of regulation.

But, the Jackets, with shades of their still-infamous series versus Tampa Bay, weren’t interested in a series deficit. Seth Jones took a shot on an open look from just inside the right circle, good enough for a one-goal game to send out Dubois and company, who turned on the jets for a two-on-one opportunity-meets wrister for his second goal of the game.

In the game’s extra frame and riding a 21-save performance in net by Merzlikins, Columbus needed a break after the Leafs managed some of the better sudden-death looks. A blocked shot-takeaway by Alexandre Texier got the Jackets streaking up the ice with one player darting in and in need of the puck–Dubois sending home the game’s winner and putting the hub city hosts on the brink of elimination on Friday.

“Never a spot you want to be in,” Jones said about the team’s 3-0 deficit in the second. “We stayed with it, we started playing some good hockey late second and third period and found ourselves back into it. Overtime wasn’t our best, but we found a way to stick together.”

For Dubois, the game was more than just the first playoff hat trick in Blue Jackets’ history.

On Tuesday, he registered just two shots on goal, was on the ice for two of the Leafs’ three goals and was part of a confrontation with his coach, captured on TV.

Thursday, he sported 10 shot attempts including six on net with 27:30 TOI. Though the center says he didn’t change much between the two games, he was clearly a driving force behind the comeback.

“Every game you try to be a difference-maker,” Dubois said. “When you’re down 3-0, your defensive players are big, but at some point you need to score and it was a team-effort tonight.”

Cam Atkinson, four points in three games, gives up a full foot in height to Dubois, but has done well with utilizing his speed to create good offensive looks, but gave strong praise to Thursday’s star attraction.

“If he wants to be one of the best players in the league,” Atkinson said. “He has all the capabilities–all the tools. Tonight he showed it. It’s not always going to go your way, but it’s those moments when you capitalize on those opportunities. Big-time players step up in big-time crucial situations and sure enough, hat trick and he put us all on his back. It’s good to see him coming out like that.”

Tortorella wasn’t all that interested in linking the performance to Tuesday’s exchange.

“We’re coaching our players,” he said. “We’re coaching all our players and sometimes certain things happen and you have to coach them. I’m not so sure that has anything to do with tonight. I just think Luc (Dubois) played a really good hockey game and had some great concentration.”

And, just as important–the goaltending swap.

“It certainly wasn’t due to (Korpisalo’s) play,” Tortorella said. “You go down 3-0 and you’re playing back-to-back, I have to start thinking sometimes and I need to get ready for the next game also, especially in these back-to-back situations. We have tremendous faith in Elvis (Merzlikins). He’s a really good goalie.

“It gave us a chance to catch our breath. I think that’s one of the biggest things we needed to do.”

And how does the coach get his team, riding a big high from a major comeback victory in the playoffs, get back to form with another date with the Leafs awaiting on Friday.