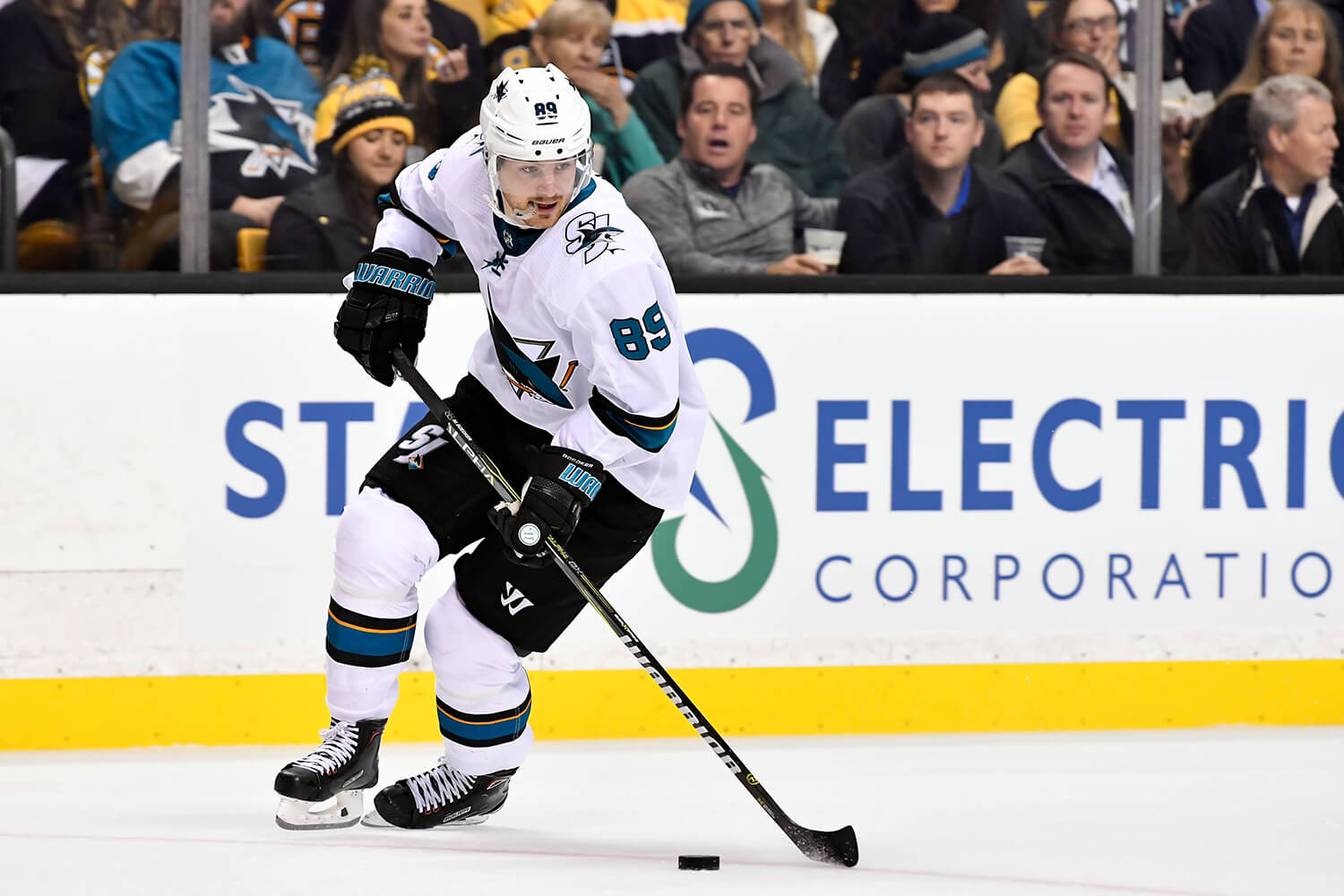 Anaheim is in no way the team it was in the early part of the season, and that’s a good thing. Their injury woes are for the moment behind them, with the only player not having returned is Patrick Eaves. In addition, they made an important stabilizing move when they picked up JT Brown on waivers eight days ago. This allowed them to turn their fourth line into an at-least-partially legit threat. Brown is on that line alongside Chris Wagner and Antoine Vermette. They don’t play a ton of minutes, though Vermette does a lot of faceoff duty in late parts of the game no matter what line happens to be on. But they’re steady, and they can move the puck.

The Ducks have also solidified their third trio, that being Adam Henrique centering Nick Ritchie and Ondrej Kase. That is, while Kase is healthy. Three times this year, he has been on the sideline with illness or injury.

San Jose, you could say, is not what it was in the early part of the season either. Take that two ways. On the one hand, their defensive scoring machine, Brent Burns, has come alive. He leads the team in points now, and leads the PP in points also. This has all happened since early November.

On the same hand (Teemu Selanne would say), their goaltending has taken a shift. Martin Jones, who was supposed to lead them back to the promised land, is not only hurt—day-to-day right now with a relatively minor malady, according to the team—but also not playing at all like the saviour he’s supposed to be. His numbers since November go like this: he was 10-5-1. His GAA was 2.05, and his save percentage was .930. But he was pulled twice lately, and he had a string where he gave up four or more goals in six straight games.

But that’s OK. Why? Spell the answer Aaron Dell. He has now played 39 games, after winning versus the Ducks Sunday night. But his numbers coming into that game looked like this: 19 games played this year, with an 11-3-2 record. His GAA—2.18. And his save percentage, .928. All of those numbers are better now.

And Dell is nothing if not consistent. His career record is 22-9-3, and GAA 2.08. His career save percentage is .929. So he’s not exactly someone you would predict would fail all of a sudden. And he’s got his teammates believing in him.

Points-wise, the Ducks and Sharks came into Sunday separated by three, with the Sharks outpacing their SoCal rivals. Up the road, by the way, the Kings were playing the New York Rangers, and the LA team also had 53 points. They were, too, going in a different direction than the Ducks. But look for a note about that later on here. This ain’t about the Kings, because I can be in only one place at a time, and on Sunday night, that was Anaheim.

Anaheim had a 6-3-1 record in ten prior games. The Sharks were 5-3-2. They stood at second and fifth in the Pacific, or in playoff terms, the Sharks were plainly in and the Ducks way, way out. They were fifth in the West Wild Card race.

The expectation from Anaheim fans was that their team would go out and do what they’ve been doing—win the game based on opportunistic offense and fantastic goaltending.

The expectation from San Jose fans was that they would do exactly the same. Think about this: coming into the game, the Sharks goals-for and goals-against were these: 128-120. And Anaheim: 129-129.

This is a trend in the Pacific, by the way. The Kings entered the night at 131 and 112. That number will likely look worse a week or two from now if that team doesn’t start scoring. They have scored but one goal in each of the last three games prior to Sunday, and just two goals in the game before that.

But just a side note on them: their coach called it a “streaky season” this week, and if you look at the numbers, the team did score four, then five, then three, then three, goals in the four games prior to the slide just described. How do you go from an average of 3.75 goals per game to an average of 1.25? You have your stars stop shooting the puck, which is what’s happened to LA.

So to get back to Sharks-Ducks, whose expectations were met?

Those of the Sharks’ fans.

And why? Because that is a deep and disciplined team. If you’ve been working on the theory that they had their moment in 2016 and are done, you’re dead wrong. Their leading scorers aren’t some guys NOT named Thornton, Burns, Pavelski, and Couture. Those are still the guys. And they’ve got other guys. Lots of them, and they can really play some hockey. How about Vlasic with a goal and a helper versus the Ducks? And Boedker with two and one? Or Karlsson with a goal and an assist? Tierney with two assists? Yep. They’ve got a deep, skilled team.

Here’s how they dismantled the Ducks: In period one, they let the Ducks control off the faceoff in the form of a Rakell rush. But then they took over and earned a power play. Nothing came of it.

They then let the Ducks take over again, and it seemed like Anaheim was the team of the night, but one quick rush, and bang! The game was 1-0 for San Jose. They would eventually lead by 3-0 despite having taken only 13 shots.

Rakell would eventually say, “We had some early chances in the game that we didn’t score on. They scored first instead. Maybe we got a little frustrated and that affected the way we moved forward. Maybe that was it tonight.”

Not long after the goal, the Ducks had two chances which more or less recap their night. On the first, Ritchie passed to Kase in the crease. He got only a weak shove on the puck, because he was being well defended. So often in the game, that’s how things went—San Jose would get a stick out and block.

Goalie Dell commented on this after the game: “Our D zone coverage was great tonight. We had forwards helping out as well. We worked as a full five-man unit all night long.”

The other chance was Montour to Henrique. He took a shot and hit the post. So close, but that’s exactly how the Kings lost to Pittsburgh the other night—they would be within an inch, but not score. And things would go downhill from there for Anaheim.

(More near-misses happened in period two as well. Getzlaf tossed a puck to Perry, who redirected it over the net. But wait for that.)

The Ducks more or less controlled the rest of the first period, but no more scoring took place.

The first period drew the comment of Dell as well. He said, “They came out hard. We came out a little tired on back-to-back, but we fought off the storm and got going in that period. We started out a little slow, but then we picked it up. I didn’t notice any drop-off.”

The second period saw Kevin LaBanc put in his fifth of the year. It was a beauty, grabbed from a Ducks’ turnover the San Jose end and down the ice. When he got to about the faceoff circle, he kicked the left leg up, opened the blade, and fired it home.

He described the goal after the game: “It was a great opportunity, and if I had missed that, it would not have been good. It was a great pass by Jumbo (Thornton) too. I kind of opened the blade up a little bit, to freeze the goalie, and then kind of get him frozen, and just the glove side opened up for me.”

The Ducks saw some life in the form of a good PK after that, one of three they would make. (There were five penalties, and the Sharks scored on two of their chances.) They then had a power play of their own, but saw the Sharks clear it down the ice three separate times before they had a good chance in the form of Kesler shooting from a sharp angle. The Sharks cleared the puck after that, as they had done prior.

The Sharks went ahead 3-0 on the power play with 13:56 gone in the second period. The Ducks countered with a power play goal of their own at 19:33. They almost got another one, Silfverberg whipping a puck at the net with ten seconds to go and lying on the ice while it went down the other way harmlessly to end the second period 3-1.

After the game, Coach Peter DeBoer described the difference in his team’s first and second period play: “Credit to them (Ducks). They had a lot of zone time. We didn’t help ourselves. We were stick checking. We didn’t put people up against the boards and stop any of those cycles. I thought in the second period—we talked about it between the first and second—we did a much better job of that, and actually, I thought, didn’t give them very much until the power plays at the end of the period.”

In the third, the Ducks buzzed early. They got the game to 3-2 at 1:47. And then they let it slip away. This isn’t supposed to happen to a team when they have the other guys on the back end of a back-to-back.  But the Sharks got another power play goal, and then made it 5-2 around the ten-minute mark.

Thornton scored, something LaBanc talked about after the game. He said, “You don’t really see him shoot too often, so, and he’s a shooter. He can shoot the puck. He can pass the puck. He’s a great player.”

The Ducks, meanwhile, had been playing some good hockey, controlling the puck and shooting toward the net. The Sharks often blocked these attempts, or were in position to have pucks harmless hit off skates or sticks. Or they saw the Ducks shoot high and wide, as Kase did from the mid-slot.

The Ducks were outshooting the opposition 30-21 with 10:29 left. The game was barely within reach at 4-2. But right out of the ten-minute break, the Sharks scored again, on a three-on-one with Montour caught up ice.

Boedker came down with two guys accompanying, but kept the puck. He fired it between John Gibson’s arm and body. Shortly later, with things not going to come back to them, Randy Carlyle pulled Gibson and let Aaron Miller finish the job. He allowed a goal on a long slapper with Karlsson skating into the zone. Not a bad goal, any more than the prior one had been. But 6-2 nonetheless, and perhaps the Sharks had proved who they were in the Pacific.

IH asked coach DeBoer about his feelings on his team’s status in the Division, but he was coy about answering: “We’re living day to day here. We’ve got one of the toughest schedules in the league in the next two months. We’re just, you know, living day to day, trying to put our best game out there, put our head down and see where are when things end in April.”

“We have all four lines going. I think we’re a really good team, hard to beat. We play good defensively, we do everything right. I think we can beat every team here. I think we’re going to keep doing that.” That was Melker Karlsson’s assessment.

If he’s right, then it’s not going to matter much what the rest of the Pacific does.