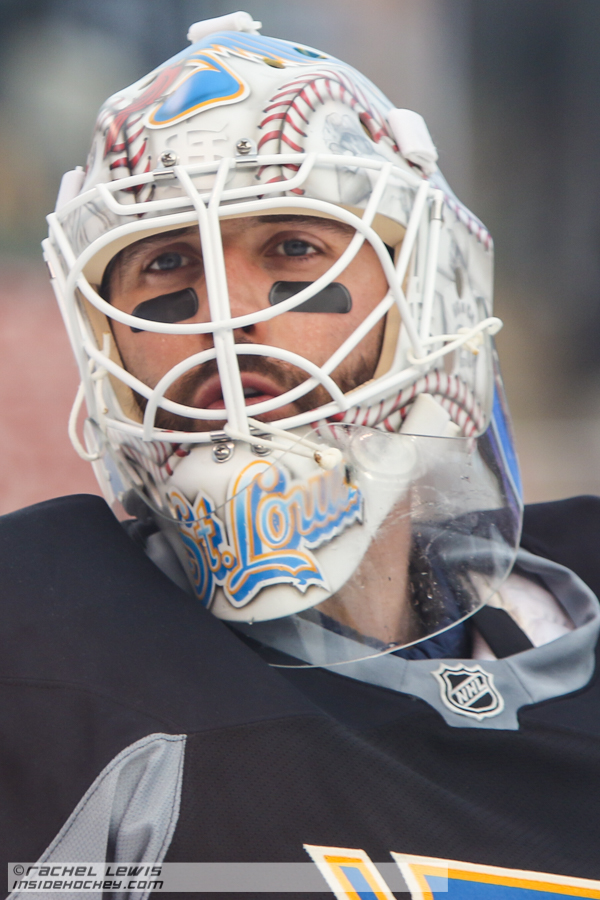 Difference of a Day

What a difference a couple of days make. Or three. Monday night, the Kings were in LA versus Dallas. They posted four goals and still lost the game on a goaltending performance that was mediocre. In fact, even the visiting goalie was pretty stinky, and got pulled.

Thursday night the Kings had five goals through two periods but were cruising against St. Louis, who themselves had a goal and had pulled their netminder after three goals against. It was probably more momentum than performance, because he’d only let in one bad goal. It came on a long wrist shot from the left side off the stick of Trevor Lewis that saw the netminder too deep in his cage. Perhaps he was worried about Kopitar, as he should have been, since the latter was cruising down the slot for any tips or rebounds that might have become available.

Meanwhile, Muzzin put a bookend of goals in past Jake Allen, the first off a low slapshot (see, these guys do read their memos, which have been saying for weeks, “stop shooting over the net”) and the second off a chip slapshot one-timer (now who else but me is going to describe things that precisely for you?).

With him out of there, the LA team proceeded to christen Carter Hutton’s arrival with a goal just 51 seconds later, off Pearson. It was almost exactly from the left dot spot where Muzzin had shot from.

The Blues got one back and were lucky to do so, since they took only two shots all period. This one was a shot from Steen which Stastny reached out for with his skate, backwards, and redirected into the net. It appeared that it was being looked at for a distinct kicking motion, and there was no doubt as to the intention. But the referee announced a review based on coach’s challenge LA.

What a waste. The only possible interference was a guy tied up with Martinez outside the crease, going from left to right. It was rightfully and swiftly denied. Who knows—maybe it wasn’t a matter of erasing a goal so much as one of showing the goalie the team’s support. Were Sutter the kind of polite and respectful coach who would take well to that perfectly normal question after the game, I would have asked it. But, well, you know. You’ve seen his press conferences.

Pearson added a second goal with 11.3 seconds left. The play started with a bounce that got away from Brown and functioned as a clear-in, grabbed by Carter. He flung it from the corner below the goal line to the front, where Pearson was crashing. He turned his body to shield himself from defenseman Robby Fabbri, who lost him due to that clever move.

The only other notable occurrence—Clifford and Reaves jawing at each other off the faceoff two drops after the goal. They were shoved aside by the linesmen, and when period three began, each found himself sitting in the penalty box for ten minutes. Clifford was jawing away though, hoping for a tussle.

As P3 began, in other words, the people from the cap companies were salivating—two Kings, and two of the better ones at scoring goals—were on the verge of hat tricks. It didn’t happen, but they maintained their 5-1 lead to the end. The Blues turned it on a little bit late, recording 14 shots in the third to end with 22. The Kings got 28 in total.

So what’s different from the last LA game? For one thing, the Kings took advantage of a first-period double power play, scoring on the first two of four minutes. The Blues, by contrast, blew their two play opportunities in period one, and without even registering a shot.

For two, the Kings had no moment of weakness display itself from their goalie. Budaj has been generally good, and I’d be reluctant to criticize him even for Monday, but on Thursday night, he gave no quarter to the Blues.

And finally, the Kings had a couple of good breaks—the goal right near the end of the second period hard-earned but also extremely timely, a back-breaker for a Blues team that hadn’t done anything themselves in the frame, save for the single goal as already discussed.

The Blues are fairly clear on what they’re doing wrong. “We’ve been on and off, on and off, since Christmas,” Paul Statsny said. “We have to give ourselves the chance to win. You can’t quit on each other or not fight for each other, and that’s what happens when we get down a goal.”

Steen said it too. “To me, it’s details in our game that we aren’t doing as well as the opposition. The details, just being, uh, I don’t know, it was, they played well and we didn’t answer.” He followed up with, “There’s fixable, easily fixable [things]. We’ve got to find a way.” He wasn’t really sure precisely what was wrong, but he cited, again, “Details” and the “day tomorrow to analyze things.”

And their coach agreed: “I thought today, we did a lot of good things.” But then he told the truth: “Probably offensively we didn’t go until the third period into the high traffic areas, so that’s something that needs to get addressed. We got too far away from the net at times. But obviously you can’t let that many goals in. We’d be beating a dead horse to say we need better goaltending, but right now we’re at a stage where every mistake goes in our net. And we gotta be careful. We had a lot of good things today, but when we make mistakes, it’s in the back of our net.” He added that the team has to be “way greasier, dirtier, into the garbage areas.”

He said that his goalie needs to “man up” and “go turn it around the other way. He’s got to really take charge here.” But then he balanced that out by saying that the team in front of him has to be better, to have a few games where they have single-digit scoring chances against. He refused to get into specific criticisms of the goalie. “We got to deal with it. He’s got to help himself, and we’ve got to help him. Maybe there’s one game where we’ve got to score six goals to win it.”

LA is home for the week now, playing Winnipeg, then Tampa Bay and San Jose. They then have a long, quite difficult road trip, so if they’re planning to finish the second half of the season like they’ve just started it, then they’d better pile up some points between now and next Thursday.

The Kings play an unusual 7pm start Saturday, and a more than unusual 1pm Monday faceoff.