It may still be another four months at least before the Devils see competitive hockey games, but the organization is closing in on filling two of the club’s most important roles.

According to reports, Lindy Ruff, who has coached nearly 1,500 NHL games in the role as head coach including a 15-year stint with Buffalo between 1997-2013, will be named the team’s head coach for the 2020-21 season. Ruff is currently an assistant coach with the New York Rangers, a role he has been in since 2017-18. Prior to his current role, he served as the head coach of the Stars for three seasons including a 50-win 2015-16 season that saw the veteran bench boss reach 50 wins for the third time in his career.

**Breaking News**
As per what I’m told ; @NJDevils to name Lindy Ruff as their new Head Coach. Also expected to remove the interim tag from GM Tom Fitzgerald.@NHL @NHLNetwork

In addition to filling the head coaching vacancy, which was previously occupied by interim head coach, Alain Nasreddine, the team has also reportedly removed the interim tag from Tom Fitzgerald. Fitzgerald, who has been with the organization since 2015-16 as assistant general manager, assumed NHL GM duties following the dismissal of Ray Shero on Jan. 12. 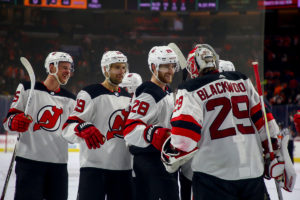 Fitzgerald, who was a candidate for the Wild’s GM vacancy in 2018, got his feet wet with New Jersey this season, trading veteran assets Andy Greene, Blake Coleman, Wayne Simmonds and Sami Vatanen at the deaedline for packages that included a collection of draft picks and prospects, most notably acquiring a conditional first round pick in 2020 and 2019 first rounder, Nolan Foote from Tampa in exchange for Coleman.

The Devils could release a statement regarding the moves behind the bench and in its front office as early as this week.

Among the candidates that interviewed for the team’s GM role included former Canucks GM, Mike Gillis. NBC TV analyst, Pierre McGuire has also been rumored to have interviewed for the position while his colleague, Eddie Olczyk was also mentioned as a potential candidate.