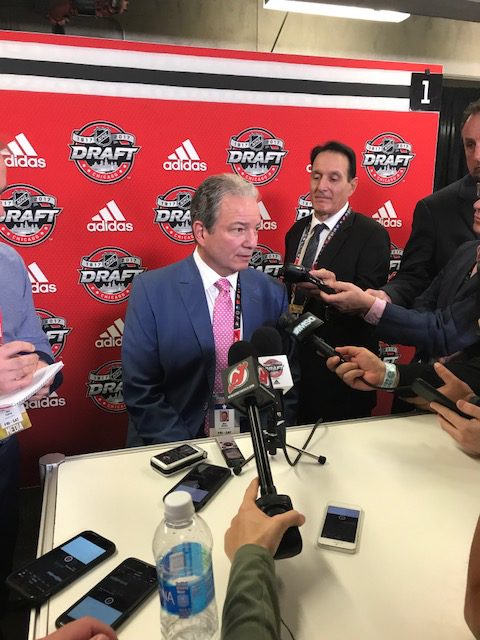 Devils Time is Running Out, But for Who?

Saturday, by all accounts, was Rock bottom. How could it get worse? A home defeat at the hands of their biggest rival, more than half the building of Blueshirt faithful roaring as their team twice scored shorthanded.

Taylor Hall called that game’s performance “unacceptable” and the rest of the locker room agreed. The silver lining though was it couldn’t get any worse.

The Sabres entered the contest with three regulation wins in their last 15 and were poised to be vulnerable enough for a spirited bounce-back effort from New Jersey.

Then the game happened–rather, the first period.

By the first TV-timeout, the Sabres led 2-0 with three shots fired on net. Louis Domingue couldn’t get help on the first two goals and when Connor Sheary snuck past three Devils for the 3-0 marker 6:57 in, it was a low-point moment in a low-point game in what might very well have been the season’s lowest point.

A 51-foot-shot caught Domingue’s blocker shooting the puck upwards. When it arrived back down it was in the net and Sheary had a two-goal game. Though suspect, it was the saveable shot by Rasmus Asplund–a first NHL goal–that made it 5-0 before the end of the first and signaled a short outing for the netminder. Mackenzie Blackwood, the expected starter for the second half of a back-to-back at home versus Vegas, was supposed to have the night off.

The 7-1 final was indeed a low point within a season that two months in looks destined for quite a few. And it’s hard to tell who time is running out on.

John Hynes is on pace to miss the postseason for the fourth time in five seasons behind the bench, but the opinion of him internally has not appeared to waver. And the team has worn their losses and hasn’t displayed the signs of “tuning out.” Ray Shero, who assumed the position of General Manager in May, 2015–is again presiding over a ship that is sinking. Prior seasons, he’s had to ride out the hard times, focusing on the future, maximizing returns on present pieces and publicly stating that when the time is right, they’ll make a move. This summer he made several including the acquisitions of P.K. Subban, Nikita Gusev (trade) and Wayne Simmonds (free agency). Criticism for Shero, the roster’s architect isn’t unfair, but I’m not sure it’s shared by the powers that be. Last season he was rewarded with a contract extension.

UPDATE: According to NJ.com Devils’ beat writer, Chris Ryan: The Devils are reportedly closing in on dismissing John Hynes as the team’s head coach.

And the players? Well the trajectory they’re on suggests the Devils should be prime sellers at this season’s trade deadline. Hall, Sami Vatanen and Wayne Simmonds are on expiring deals. But others may garner interest as well. But trading expiring assets doesn’t exactly put the club in position to help patch roster holes.

So maybe time is in fact, just running out on the season, in which case it’s all about killing the clock until the Draft, where it’s back to the drawing board.  By then, losses aren’t nearly as apparent. Which is surely a relief.

Jeff Blashill, running the bench of the only team below the Devils in the standings–the 7-20-3 Red Wings, is also in his fifth season and heading for a fourth postseason miss in five years. The Mike Babcock apprentice might have a considerably hotter seat even with a contract extension signed last April–just weeks before Steve Yzerman came in as the team’s General Manager. The latter has no leash but Blashill may be biding his time.

Quick thought on the Islanders, who garnered league-wide attention during a 15-0-2 stretch from October into November: Devon Toews is going to be a well-recognized name soon.

I have no real reason to think David Pastrnak can’t hit 60 goals this season. He’s got 55 games to score 35 more–maybe 50 if the Bruins decide to employ ‘load management.’

On the topic: Pastrnak has played sub-17 minutes nine times this season. In those games, he’s scored 11 goals and 8 assists for 19 points. Bruins 9-0-0 in those contests.

The Blues and Penguins are without Vladimir Tarasenko, Sidney Crosby, Justin Schultz, Alex Steen, Brian Dumoulin, Sammy Blais and Oskar Sundqvist. With 42 and 32 points respectively, I’d wonder if they enter the buyer conversation for bigger names than we expected in October.