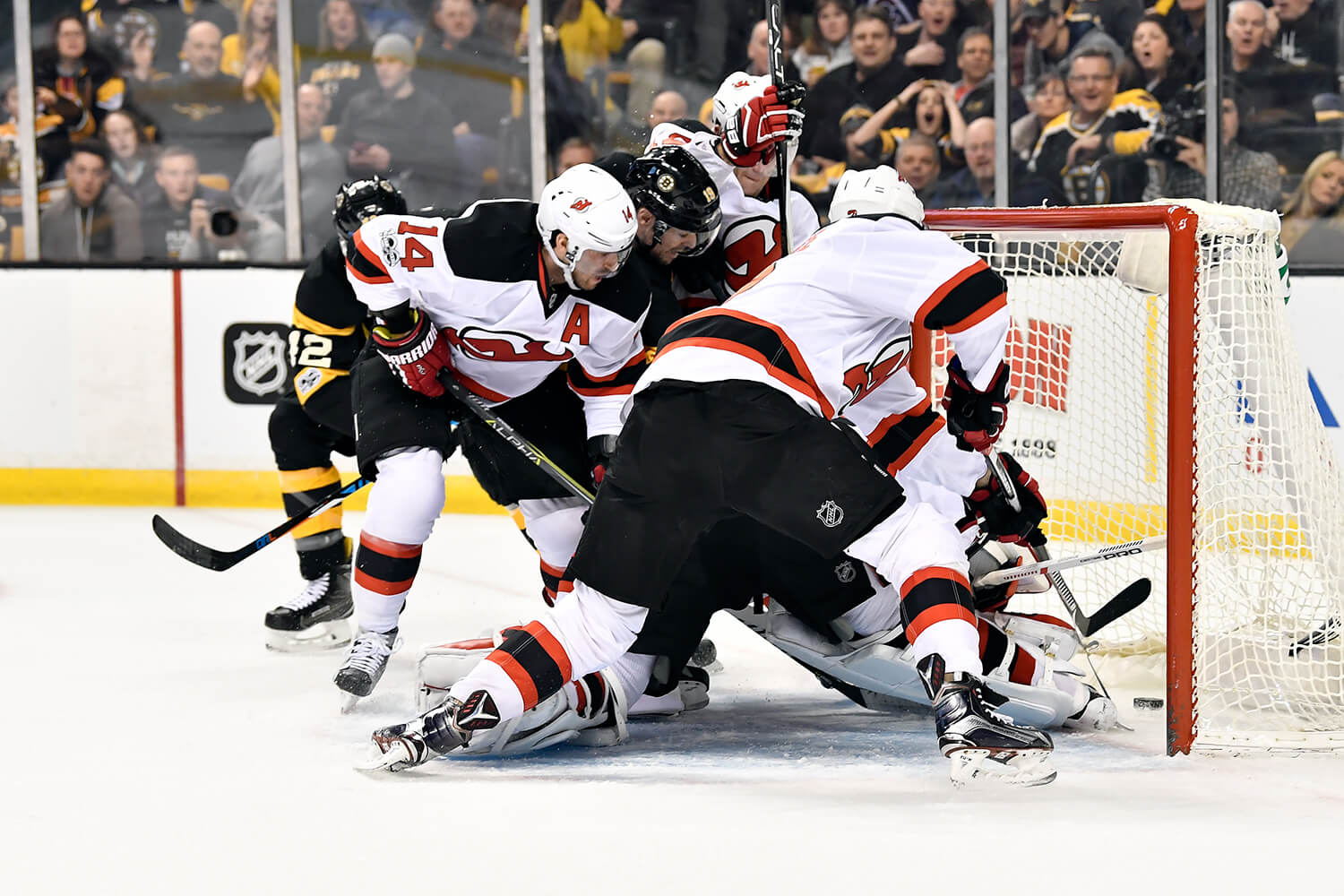 A goal scored by Boston Bruins right wing Drew Stafford (19) which was later called off due to goaltender interference. (Brian Fluharty/Inside Hockey)

NEWARK, NJ- – The Devils have arrived but will they stay?

When the general manager Ray Shero was hired in the summer of 2015, he made it clear in his first press conference that the Devils were going to be a
specific team moving forward. He stated that this hockey team identity was going to be
fast, that it would be attacking and that it would be supportive.

The slow and methodical process might have been frustrating for fans over the last two seasons, but if Tuesday’s 5-4 win in a shootout over the Lightning says anything about
this team, it’s that this identity has started to take form and maybe the waiting is over. But can this Devils team continue to win?

The 6-1 record is encouraging for New Jersey, but is also a reminder of the 9-3- 3 start last year followed by seven-straight loses. The team eventually plummeted to the bottom of the Eastern
Conference. One sign of encouragement is New Jersey’s 4.20 goals per game, tied for second-highest in the NHL. A surprise considering the team has been among the lowest scoring clubs for the past four seasons.

For head coach John Hynes, it’s all about the belief in the team’s culture, something his staff has tried to instill since day one.

“Last year was unacceptable to everyone that was here,” Hynes said. “I think there was a
lot of hard work that went into the summer, individually from players, coaching staff and
management. I think the additions to our team through the draft, through trades, through
free agency have really aided the culture we want on and off the ice. I think you really
have to credit the players at the end of the day.

“They’ve come to work basically every day here. We haven’t had a bad practice. The guys are on time for meetings. They’re ready to play. They’re playing for each other”. Hynes then stated, “I think the biggest difference between last year and this year is the team culture, the team buy-in, and also we have more players that can play the way we want to play.”

One of those players is Drew Stafford who has three goals in two games. Stafford has fit right in with the Devils system and has looked like a strong offseason acquisition.

“I think one of my biggest strengths is my play down low and ability to hang on to pucks,
protect pucks in the dirty areas and if I do get my stick on it sometimes I have decent enough hands to put it away,” said Stafford, “Being able to play with guys like (Hischier), Hall, (Johansson) or (Zacha), we have a wealth of talent to go around and I think I can complement any of those guys really well.”

The Devils number one pick, Nico Hischier, continues to impress, he notched a pair of assists in Tuesday’s game and nearly scored his first at home. Hischier would find the back of the net versus Ottawa on Thursday. Hynes offered strong praise for the 18-year-old just seven games into his career.

“I think if you look at him, you have to give the kid so much credit,” he said. “He’s playing top line minutes, he’s playing all situations. He continues to get assists and help us win games. If he continues to stay with it the way he has, I think it’s going to come in bunches for him eventually.”

Hischier with or without a goal says he’ll continue to smile if the W’s are coming.

“At the end, I still have a smile on my face when we won this game,” Hischier said. “If
we lose this game, it would bother me a little bit more.”