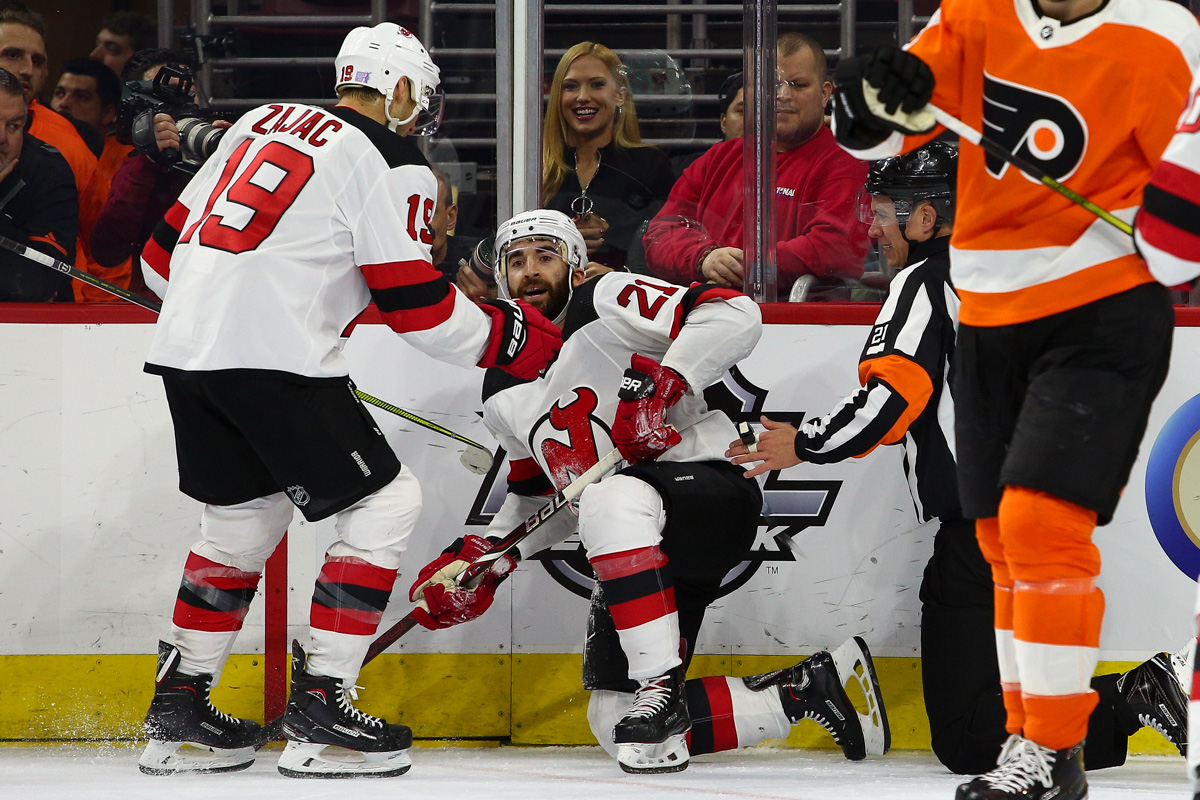 By now, you undoubtedly know that the Devils found a deal they liked for Kyle Palmieri and after deciding not to waive his no-move clause at last year’s deadline, Travis Zajac did so to facilitate a move. And if you were still in denial that the veteran Devs are now Isles, packaged together in a pre-deadline trade on Wednesday, you can watch the pair play their second (2nd!) contest since the deal on Friday as the Islanders host the Rangers.

Yesterday, I wrote about Tom Fitzgerald, the Devils and the rather familiar sales pitch that’s been trying to round into shape under two general managers, two head coaches and one interim coach: future and hope. Understandably, that approach has plenty skeptical and for good reason, too. The 20-21 season will mark the third-straight season without advancing to the postseason, including missing out on the league’s 24-team return to play last summer.

Since their loss to the Kings in game 6 of the 2012 Stanley Cup Final, the Devils have played in just five postseason contests. When Adam Henrique scored what is by far his most famous goal–the game 6 Eastern Conference Final clinching, OT-winner on Henrik Lundqvist, it represented the last New Jersey playoff round win in nearly a decade. From 1995–2010, the Devils won three Stanley Cups, won 9 division titles and recorded 11 100+ point seasons. They also missed postseason play once in that span.

Of course, regression is a part of sports and teams with long-standing success, particularly in the salary cap era, are due for a decline when its core starts to fizzle out. In the case of the Devils, there was Zach Parise leaving via free agency. Martin Brodeur and Patrik Elias retiring and a change in senior leadership, which seemed to have overall positive reviews. But now, grappling with what might feel like spinning the wheels on a long rebuild process, fans are losing patience. The organization has high hopes for its youth incoming and the ones you’ve seen this season, the latter half has already inspired hope.

But, of course, hope might not feel like enough. And with the GM saying he is open to utilizing his league-leading cap space to the club’s advantage–among other things–let’s dive into what could be some of his available options.

At last year’s draft, the Devils selected three times in the top-20. There’s a strong chance that Alexander Holtz (7th) and Dawson Mercer (18th) challenge for spots on next season’s roster and for spots in the team’s top-9. Shakir Mukhamadullin trailed off a bit offensively after a quick start to the season in Russia. He was one of three teenaged regulars on Ufa last season–no easy task in the KHL, Russia’s top pro league. The Devils might not see him next year, but he had some positive reviews from prospect writer at The Athletic Corey Pronman.

At the 2021 Draft, the Devils are slated to enter with two picks: their own and the Islanders. Fitzgerald, who said he wishes the pair of veterans the best with New York and for their sake, hopes the pick is the 32nd, technically won’t have to wait until 32 to make his second pick as the Arizona Coyotes will be without their first round selection for rule violations related to testing prospects before the NHL Draft Combine, which was eventually cancelled due to the COVID-19 pandemic.

So, even with Seattle, it will be another year before we see the 32-player first round of the NHL Entry Draft. But, that pick (or picks) could become a factor at the draft floor (errr…virtual draft floor) or in the lead-up to the expansion draft.

“It just gives you flexibility to potentially add,” Fitzgerald said. “Add a position of need or a player that comes across the board. Maybe it helps us with a team with expansion issues.”

Of course, drafting both spots could also serve as a way to add for a position of need. But multiple picks in the first round, in a draft where in-person scouting might have been difficult for evaluating middle to late-round prospects, could prove to be a coveted asset.

Maybe, the Wild, who have three blueliners with No-Move clauses would be open to parting with Matt Dumba, who will turn 27 next season and is a generally strong puck-handling defensemen. How does Winnipeg look at their protection list and future cap with Neal Pionk and Pierre-Luc Dubois as arbitration-eligible restricted free agents? Is it too crazy to think Nikolaj Ehlers enters the conversation? He’s 25 and surely has the kind of pedigree that would might warrant floating around the Devils’ own first rounder. Could we see another Rangers-Devils deal? Is Pavel Buchnevich, a restricted free agent, squeezed out by the Rangers needing to pay Filip Chytil this summer and Adam Fox and Mika Zibanejad one year later? They’ve got four players with expansion protection, too.

More Cap Space Than Anyone Else

According to CapFriendly, the Devils currently have an estimated $9.5 million in cap space. That could mean the Devils are a team of interest to cap-strapped teams this offseason with little to no growth expected on the league’s salary cap (and even the daunting reality of a decrease from the present $81.5 million upper limit).

In the here and now, the Lightning (who will await news on Nikita Kucherov’s status and more recently, Steven Stamkos’), are among 11 teams operating with under $100,000 in room. Could that mean some cap shenanigans to help make a push for a player on Monday?

So if Colorado wants to dip into the trade market and do some shopping for blueline depth, a top-nine forward and you have to think, a goaltender–does New Jersey swoop in and take on Matt Calvert for the rest of the season? Does that fetch you a draft pick? Do you suppose taking on Marian Gaborik’s LTIR cap and or Anders Nilsson’s from Tampa is worth compensation for the Bolts, eying a repeat? And probably a defenseman.

Other situations could arise between now and Monday. Or linger on between the end of the season to the expansion draft and entry draft. You’d think the Devils will do some shopping in free agency to replenish some veterans to insulate what is likely to be a young team in 21-22, but continuing to stock the cupboard remains priority No. 1.