The opening of the frenzy that is NHL free agency on Wednesday has the potential to alter the direction of the New Jersey Devils. After missing the postseason for the eighth time in nine years and now entering the 10-year anniversary of the last taste of any organizational success–a run to the 2012 Stanley Cup Final, Tom Fitzgerald and co. want to elevate an extensive rebuild.

The rebuild and/or retooling of the franchise from top-to-bottom hasn’t come without fruits of some difficult labor–Nico Hischier and Jack Hughes represent the future and current state of the team as the faces moving forward. Luke Hughes, a strong prospect selected over the weekend with the fourth overall pick, projects to be a few years away. By then, the squad that was the league’s youngest last season, should be progressing. It makes Wednesday’s proceedings of significant interest.

New Jersey pitched the likes of Kevin Shattenkirk, John Carlson, James van Riemsdyk and Artemi Panarin before each ultimately landed with division rivals. They’ve lost the likes of Scott Gomez and Bobby Holik to Broadway and nearly watched Patrik Elias do the same. Zach Parise left for home some nine years ago. And, the free agent gets since their departures–Mike Cammalleri, Ryane Clowe, Michael Ryder were ultimately reminders of the perils that accompany free agency.

But they hope Wednesday will be different and that after some years of sitting on their hands, resisting the lucrative dollars and holding the line on term–among the smartest of plays this time of year–they can generate a buzz about the franchise. And to that extent and a look at the Devils salary cap in the present day and future, there’s room for risk, too. But, when the market officially opens at 12 p.m., how much will they be willing to stake? 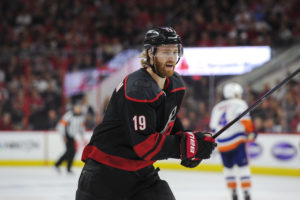 Dougie Hamilton, who by all accounts is this year’s big fish–especially on the defenseman market, will be among the top priorities for New Jersey. It’s believed they will push hard for the former Hurricane. A max-term of seven years with an AAV north of $9 million–which could rise to the Seth Jones $9.5 million figure from last weekend doesn’t seem out of the realm of possibility. Hamilton is coming off a 10-goal, 42-point season. He’s tallied double-digit goal totals in seven-straight seasons including a career-high of 17 in 2017-18 with Calgary. That offseason he was dealt to Carolina.

He turned 28 in June and while there’s no guarantees, there’s some confidence in his productivity maintaining itself for the majority of his next contract.

New Jersey, who will enter the day with the fourth-most cap space, is in a particularly strong spot to try and land the coveted-UFA defenseman. P.K. Subban ($9 million cap hit) is entering his final season under contract and if the franchise looks to move the 32-year-old, it will get much easier once his $6 million signing bonus has been paid. He’s owed $2 million in base salary for the 2021-22 season. Damon Severson will need a new deal next summer but boast an otherwise young defense core that has the likes of (Luke) Hughes and Shakir Mukhamadullin coming down the pipeline.

New Jersey’s focus won’t and can’t be singular on Wednesday. The search for stability to their goaltending and have a competitive tandem that’s headlined by Mackenzie Blackwood is among the items the Devils feel is a must. Perhaps that can be accomplished via trade, but UFA netminders, Jonathan Bernier and James Reimer are also available and could be potential fits in net.

[UPDATE: The New Jersey Devils will be signing Jonathan Bernier today, according to TSN’s Pierre LeBrun.]

All signs point to UFA G Jonathan Bernier signing with New Jersey today.
As we reported before, UFA G Jaroslav Halak should be signing with Vancouver.
I wonder if UFA G James Reimer ends up in SJ or Vegas?
Still lots to play out with goalies.@TSNHockey @TheAthletic

Bernier, who will turn 33 on Aug. 7, is coming off a three-year stint in Detroit in which he most recently recorded a 9-11-1 record with a 2.99 goals-against average and a 0.914 save percentage.

The forward market is also an area to expect some browsing by Fitzgerald. A potential role player like Erik Haula doesn’t project to command the same term and AAV as the likes of Zach Hyman and Blake Coleman will likely get. He could be among the players New Jersey checks in on. In the pursuit of some top-to-middle-six production, Brandon Saad could be an option after Gabriel Landeskog’s eight-year, $7 million AAV extension, appears to have priced him out of Denver.

Those will be priorities to address, but make no mistake about it–New Jersey, a largely conservative bunch since the post-Lamoriello era, are very interested in making a splash and Hamilton is one of the few in class that can do so.

Elsewhere, the obvious is that Parise, who along with his friend, Ryan Suter were bought out of the final four seasons of their contracts with the Wild, is expected to land back in the East. The Islanders connection, aside from his father’s three-plus seasons in blue and orange, comes in the form of Lou Lamoriello, his old boss from his days in NJ. David Conte, the head of scouting in Parise’s stellar ’03 draft year, is also with the organization. We’ll see where this goes but it would be among the more obvious places if you’re playing the odds.

Suter meanwhile might ultimately stay in the West and Central division. Dallas expected to go in hard for his services and could even go term with a potential three-year deal on Wednesday. He could be a fit in the East with Boston or Washington and of course, there’s the sales pitch from Parise, Lou and Isles’ head coach, Barry Trotz, who Suter played for during his first seven seasons in Nashville.

The Rangers got a head start on free agency, trading for Barclay Goodrow’s rights and subsequently signing the pending UFA to a six-year, $3.641 million AAV deal. 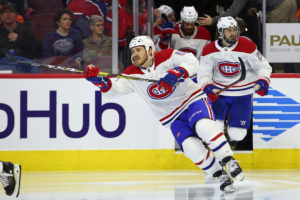 Don’t expect the new Rangers regime to be scared-off by past perils on this day. New GM, Chris Drury, once a big NYR get in free agency himself, is expected to be active when market opens up. Phillip Danault, who showed his value during the Canadiens run to the Cup Final, is of significant interest league-wide and the Rangers are among the teams expected to be front-and-center on that front.

Larry Brooks has already reported that Patrik Nemeth is likely to be signed to a three-year deal on Wednesday. He’ll be a quality third-pair option on the Blueshirts’ blue line.

The Rangers can begin discussing an extension with Adam Fox on Wednesday. Fox, 23, is coming off a Norris Trophy-winning season, will be a restricted free agent next summer. Cale Makar’s six-year, $9 million extension with the Avs will be among the comparables his side will look to for his second contract.

They’ll also have to determine the direction of Mika Zibanejad, who will get a substantial bump wherever he ends up from his current $5.3 million figure. If he’s signed a deal north of $6.5 million, does that leave Ryan Strome likely to walk and if so, how long before Drury feels obliged to trade him?

Even with those burning questions and items on the horizon, the pursuit for a tougher, more competitive Rangers squad doesn’t appear over with. One low-risk projection though…Ryan Donato? Jordan Martinook has also been a name floating around that camp.

Lastly, one team I just don’t know about–Minnesota. I know the cap implications get bad–I mean seriously bad–after next season, but there just might be some interest in Bill Guerin’s club. If NJ doesn’t land Hamilton, I’ve actually wondered about the Wild potentially poking in on that front and ultimately re-visiting their trade options with Matt Dumba.

Happy Canada Day–errr, well sort of! Enjoy the proceedings…though you probably won’t enjoy it as much as Blake Coleman, who definitely cashes in on term and good AAV.