This summer the Devils were quick to sign Brian Boyle to a multi-year contract. For them, it was the intangibles that made him so desirable. His ability to win faceoff’s, his presence in the dressing room and willingness to muck it up in the corner was appealing for a team in transition. His track record speaks for itself, he battles no matter what. A quality he’ll now lean upon all the more away from the rink.

In a conference call on Tuesday, Boyle and Devils team doctor, Dr. Michael Farber announced that Boyle had been diagnosed with chronic myeloid leukemia. CML is a type of cancer of the bone marrow that can be combated with medication. The diagnosis was revealed from the blood work following Boyle’s training camp physical, according to Devils general manager, Ray Shero. 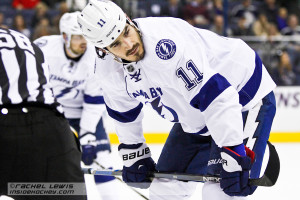 Boyle, who has played in the NHL for parts of 10 seasons including stops with the Kings, Rangers, Lightning and Maple Leafs, was optimistic when speaking with reporters via conference call.

“We are in a good place right now,” Boyle said. “For the potential of what it could have been and what it turned out to be, I think it’s positive news.

“We’ve had a tremendous outpouring of prayers. If there’s anything I could ask is for that to continue because that is something I’ve seen firsthand heal cancer and situations that are typically un-treatable.”

Still unknown is the type of treatment he’ll undergo. That remains under evaluation by the medical staff including Dr. Farber.

“These days there are newer medications out there that differ from the previous either toxic medications that are much better tolerated that can improve survival and improve quality of life,” Dr. Farber said. “We’re evaluating some more medical data, waiting the comeback and from there we’ll decide which of those agents we use.”

The cancer is the same kind that impacted former NHLer, Jason Blake. Blake, who was diagnosed in 2007, battled the disease at the start of the season but still managed to suit up in all 82 games for the Maple Leafs. That’s the exact path Boyle hopes to follow.

“We’ve got a good plan of attack here and I’m looking forward to getting on the ice,” he said. “When that happens, I don’t know but I  my mindset is October 7–I don’t like missing games.

I’ve trained all summer and tried to get back out and ramp it up,” he said. “It depends on how long this process takes, but I feel good right now–as close to normal as you could feel.”

Shero, who signed Boyle to a two-year, $5.1 million contract on July 1 confirmed the diagnosis was found following his training camp physical. He went on to praise the center and his wife, Lauren who have been dealing with the news which was first discovered last week.

“He’s been incredibly strong and certainly a man of faith and his family,” Shero said. “Fortunately for Brian, everybody is under great medical care. It’s been a whirlwind over the last five days for Brian and Lauren in particular. He’s in great hands and great faith and hopefully moving forward this is going to be all positive.”

Following the news, the NHL family showed its outpouring support including former teammates and organizations.

We are all thinking of you and your family @BriBrows22. There is no doubt in my mind that you will beat this

Praying for you and your family @BriBrows22. Stay strong my man https://t.co/yxbHHC7UZu

Boyler, our #NYR family is behind you. We’ll see you on the ice soon. pic.twitter.com/U0WXCunHqM