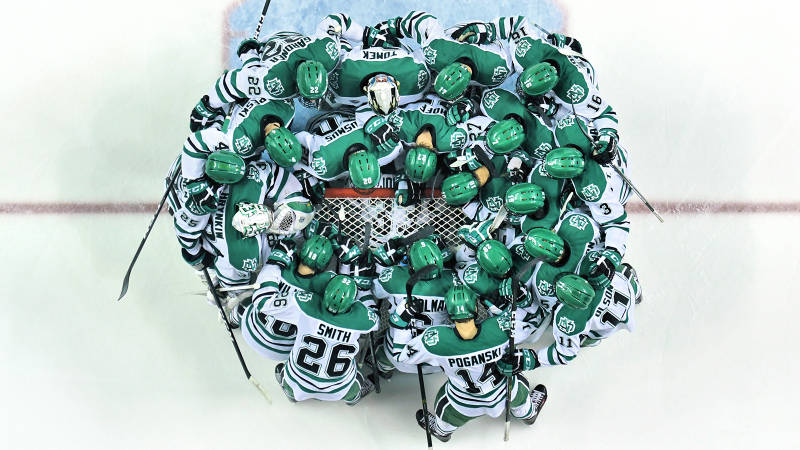 Grand Forks, ND – Historically, the hockey series between the University of North Dakota and the University of Denver Pioneers are usually instant classics. While it sounds like a hockey cliché, every game is a battle. Time and space on the ice is highly contested. Players from both teams tend to take it up a notch when the two teams play on the ice.

Did I mention that both teams don’t like each other very much?

During the first five games of the season, UND raced to a 5-0 record. However, over the past four games, the Fighting Hawks have come back down to earth going 0-3-1. This week, they returned to home ice looking to get back in the win column. Through two periods of hockey, neither team was able to dent the twine. True to form, it was a very close checking game and there wasn’t a lot of offensive opportunities.

UND entered Friday’s game against the Pioneers in the midst of a goal drought. For over a game and a half, the Fighting Hawks had come up empty on the scoreboard. Nothing was going in. Through two periods of play, it looked like the goal drought would continue. Entering third period, UND hadn’t scored a goal in 107.00.

Finally, that dubious streak came to an end when Fighting Hawks freshman forward Cole Smith scored at the 1:05 mark of the third period. Smith was skating hard to the Pioneers net and banged home a nice feed from junior forward Austin Poganski to give UND a 1-0 lead. That lead wouldn’t last long, the Pioneers would score the game-tying goal at the 13:42 later.

The two teams would head to overtime after playing to a 1-1 tie. The Pioneers and the Hawks would solve nothing after five minutes of five-on-five overtime. For the Pairwise Rankings, the game would officially end in a 1-1 tie. There was more work to do before this one was settled.

The two teams would head to a three-on-three overtime period. At the 3:28 mark of the second overtime period sophomore forward Shane Gersich would end the game with a beautiful spin-o-rama backhanded goal (video included below). There’s a good chance you might see that goal in the NCHC top-five plays of the week. Apparently, Gersich picked up this move from watching Chicago Blackhawks All-Star forward Patrick Kane.

Last season, Cam Johnson had an outstanding season, he backstopped the Fighting Hawks to their eight NCAA title. Almost everything went right for the All-American from Flint, MI. This season, Johnson had started slowly and was looking to right the ship against the Pioneers. Through 10 games, Johnson is 5-3-2, 2.39 GAA and .897 save percentage. Over the course of the past two games, Johnson’s fortunes have started to improve. Friday, against the Pioneers, Johnson played well stopping 23-of-24 shots. While he hasn’t been able to get a win he’s 0-1-1, 1.47 GAA and .933 save percentage.  It would appear that Johnson has turned the corner and is dialed back in.

“He was called upon to make a few different saves, head coach Brad Berry said. “I think both goalies did. I think there was a lot of Grade-A on both sides. There were two very good goalies that led their teams. Cam did have a very strong game tonight. I think he’s engaged, he’s focused and he was sharp tonight.”

Tonight’s game was positive move in the right direction. While the Hawks didn’t get the win, they did get the extra point in the standings.

“It was a heck of a move,” Berry said. “Obviously, he has the speed and the skill there to make a play like that as a high-end play. The same two teams play tomorrow night at Ralph Engelstad Arena.