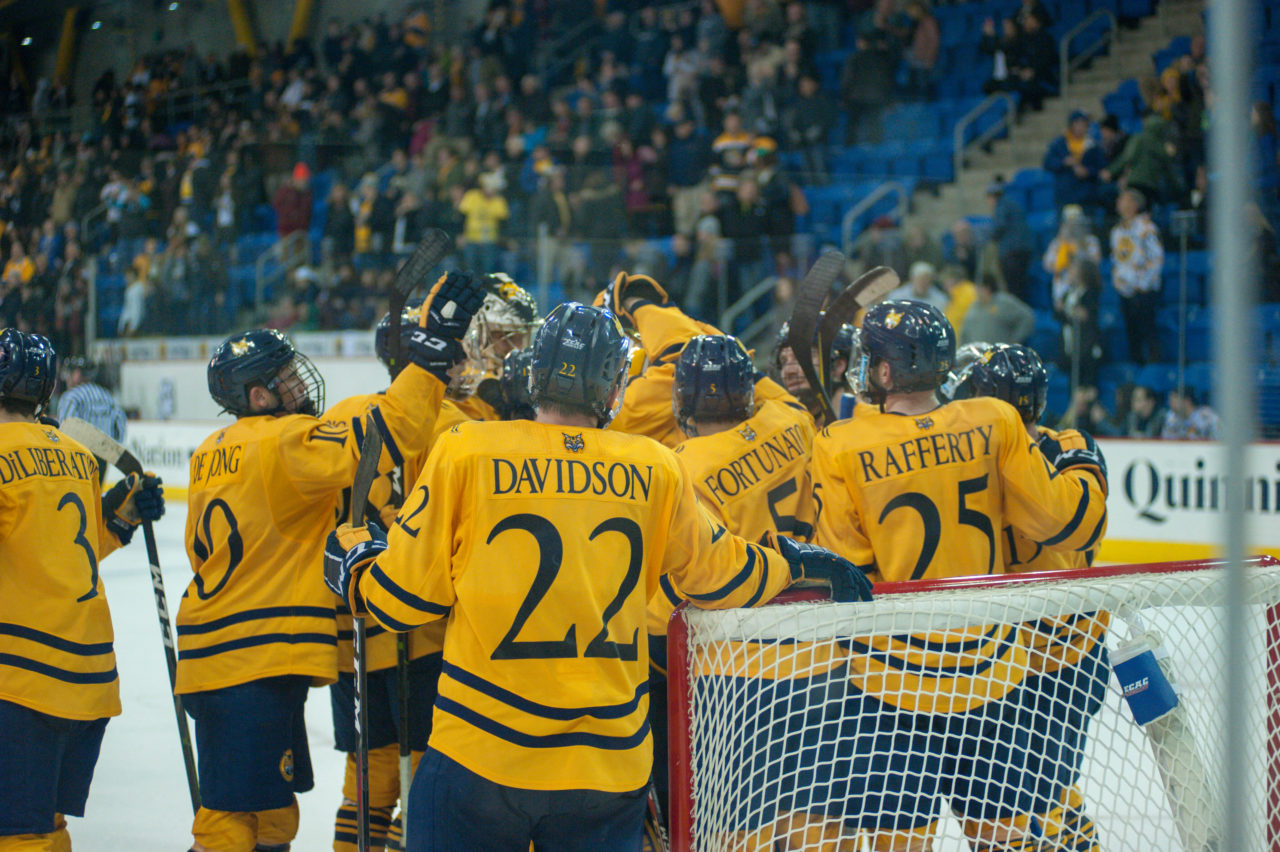 Connecticut has a decorated hockey history. Players like Brian Leetch, Nick Bonino, and Jonathan Quick grew up in the Nutmeg state. The Hartford Whalers called the state capital home for 23 years and featured players like Ron Francis, Paul Coffey, Chris Pronger, and Mr. Hockey- Gordie Howe. In the present day, the state features four Division I Men’s Collegiate Hockey teams who will meet this weekend in Bridgeport for the first Connecticut Ice Festival. Let’s preview the games.

These two were in-state rivals when both were Atlantic Hockey teams in the early 2000s. The two have since moved to new conferences. Quinnipiac has soared in the ECAC while UConn is working their way to Hockey East’s heights.

The Bobcats have the most to lose, sitting on the bubble of the pairwise rankings for National Tournament consideration to start the weekend. QU has won six out of their last 7 games and can build momentum for the stretch run with a good weekend. As a unit, Quinnipiac is at 24th in goals allowed (2.55) and 32nd in goals for (2.73). Odeen Tufto and Wyatt Bongiovanni are having strong scoring seasons with goal-assist-point lines of 3-22-25 and 11-7-19 respectively. Tufto’s assist numbers put him tied for third nationally. Bongiovanni’s goal performance is Top-30 nationally. Peter DiLiberatore’s 14 points pace the Bobcat blue line. The special teams have also been rather middling this year, ranked 35th on the penalty kill (80.6%) and 36th on the power play (17%). Keith Petruzzelli has handled himself well in the net for QU, posting a .912 save percentage (tied for the highest entering the weekend) and a 2.25 GAA (Highest among goalies in the field).

UConn has been a roller coaster team this season. They’ve won two in a row entering the weekend and have alternated between excellent showings and frustration. On the season, the Huskies are the median scoring team in the nation (30th among 60 teams, 2.78 Goals For). Minnesota Wild draft pick Vladislav Firstov has three of his team leading nine goals across his last two games. Benjamin Freeman is the only double-digit assist collector on the team (11) and Ruslan Iskhakov has shown skating flashes through the season and will be called upon this weekend. Defensively, UConn has struggled this season. The team is 51st in goals allowed per game (3.30) and 56th in penalty kill (74.7%). Tomas Vomacka has struggled in his first year as a starter in net. The Nashville Predators draft pick has an .893 save percentage and a 3.37 goals allowed average. He’s posted 37 and 35 shots in his last two games, both wins against Maine and Northeastern.

Sacred Heart is in the middle of its best season in program history. The Pioneers sit in first place in Atlantic Hockey and earned their first national ranking earlier in the year. They’re doing so thanks to one of college hockey’s best offensive units. As a team, they average 3.83 goals per game, drawing them even with Penn State for 4th in the nation. They’re also 6th nationally in power-play percentage (26.7%). Defenseman Mike Lee transferred from Vermont and is top ten in power-play points (7th, 15), assists (T-3rd, 22), and scoring among defensemen (T-1st, 26). He’s one of a few remarkable performers on this team. Jason Cotton transferred in from Northeastern. His team and conference-leading 15 goals are only two off the national lead and after brother David at Boston College, Jason is the second most famous Cotton in the sport. Vito Bavaro and Austin McIlmurray are tied for the 11th spot in national goal-scoring (14). Matt Tugnutt, Braden Tuck, and Marc Johnstone are also capable scorers for Head Coach CJ Marottolo to trust on the ice. The defense isn’t as good for Sacred Heart but certainly is quality. The Pioneers rank 18th nationally in goals allowed (2.42) and 23rd in Penalty Kill (83%). Josh Benson has taken the starting goaltender job with a .912 save percentage and four shutouts. SHU has the least history of the teams participating, but may well have the best team on the ice this weekend.

Conversely, the Yale Bulldogs are the oldest continuously run collegiate hockey program in the nation. They’re the most decorated team in the field, as the only with a National Championship banner in their history. The current edition of the Eils is a middling squad, however. Yale posts the 42nd ranked offense (2.47 GFA) and the 46th ranked defense (3.18). Boston Bruin draft pick Curtis Hall leads Yale with 12 goals. He’s scored two goals in three of his last four games and two consecutive. Jack St. Ivany is the blue line’s leading scorer (nine assists). Tyler Welsh and Justin Pearson are in the midst of good seasons upfront (5-7-12 lines). The biggest question is in net. Corbin Kacsperzinski has a .899 save percentage in his first season as the undisputed starter. He’s won his last two games entering the weekend.