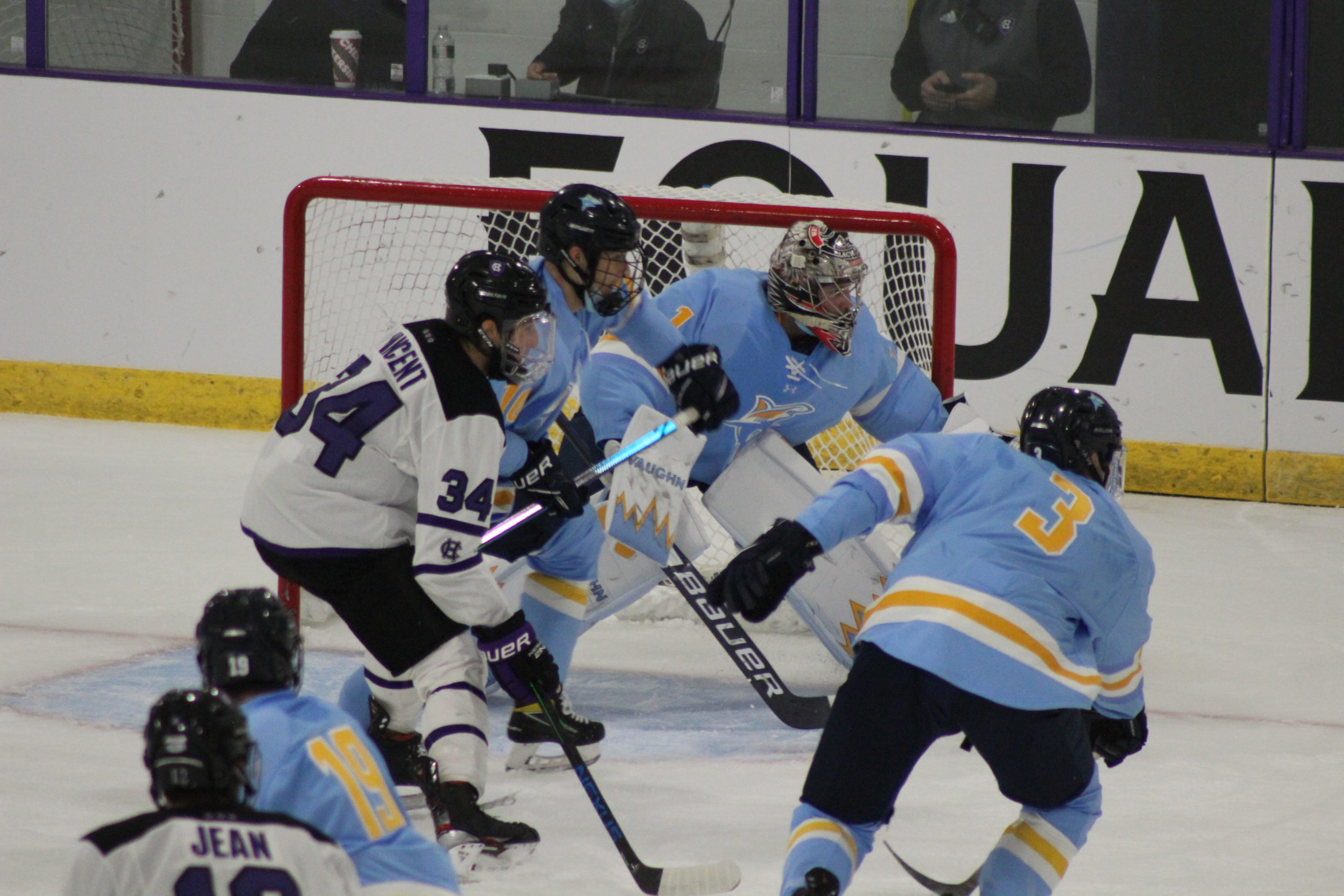 Worcester, MA- On Thursday night, eastern college hockey returned with a bang. Holy Cross and Long Island began their seasons at the Hart Center and battled to overtime. Christian Rajic scored the overtime winner to give the LIU Sharks their first win in their first game as a program.

Three days later, Holy Cross rematched against LIU without their Head Coach in the building. David Berard stayed away from campus as a cautionary move, owing to his interaction with someone who may be Covid-positive. So, without their head coach or fans, the Crusaders soldiered and earned their first win of the season.

Holy Cross dominated the game’s opening frame, out-shooting LIU 15-1 and out-attempting their guests 26-13. Anaheim Ducks draft pick and Mercyhurst transfer Garrett Metcalf held his own, but couldn’t keep the game scoreless. A smooth Crusader power play resulted in Anthony Vincent’s first goal and point of the season 13:50 into the game.

The second period followed a similar script to the first. The Crusaders controlled the pace of play and the shot counter (14-5) only to be stymied by Metcalf; except for one play. Jake Papplardo drove up the right wing fired bar down to erase a previously disallowed goal and make the score 2-0 before the intermission.

The Crusader offense doubled their lead in the first 3:45 of the third. Ryan Leibold scored first, taking only 26 seconds to do so. Logan Ferguson put the game seemingly out of reach at the 3:45 mark.

Long Island mounted a late fight. Christian Rajic scored his second goal of the weekend to prevent the shutout at the 7:01 time mark. Only 1:36 later, Preston Brodziak cut the lead back to two. The remainder of the third was a war of attrition. Holy Cross still won the shot counter, but only 17-13. LIU got a power play opportunity in the final two minutes but came up short. The Holy Cross penalty kill did its job and Anthony Vincent capped the scoring with an unconventional empty-net goal. Vincent gained the zone and was tripped. Instead of a power play, for a penalty on a scoring chance with an empty net, Vincent was awarded his second goal of the game, making the final score 5-2 and Holy Cross’ record 1-1.

Associate Head Coach Peter Roundy, who performed the Acting Head Coaching job in Berard’s absence, praised his team’s attitude and work. “We had a great couple days of practice on Friday and Saturday. And the team came out with the right attitude and stuck with the game plan despite some adversity in the third.”

Roundy also had good words for his Alternate captain, Anthony Vincent. “He’s a guy you want on your team, on any team in the country. He’s a warrior. He brings it night in and night out. We lost him last season and that had an impact on our season. Having him there now gives us such a boost.”

Roundy added that Berard was in good health and the two had talked before, during, and after the game with Berard watching from afar.

Goaltender Erik Gordon stopped 17 of 19 shots faced for his first win of the season.

Holy Cross begins Atlantic Hockey conference play next weekend with a home-and-home against Bentley. Friday night’s game is at the Bentley Arena and Saturday’s game is at the Hart Center. Puck drop for both games is 5:05 pm ET.

Long Island records the program’s first loss. They now are 1-1

Garrett Metcalf recorded a 41 save effort on the night, third most in his career behind 43 and 44 save games against Air Force while playing for Mercyhurst last season on February 21st and on March 7th in the Atlantic Hockey playoffs respectively.

LIU was scheduled to visit Quinnipiac on Friday night before the Bobcats canceled their games this week due to a pair of players testing positive for Covid. So instead, the Sharks are next scheduled to play a home-and-home against American International College on December 4th and 5th. The 4th will be played at the MassMutual Center in Springfield, MA. The 5th will be LIU’s first home game as a program. They’ll host at the Northwell Health Ice Center in East Meadow, NY. Puck drop for both games is 2 pm ET.