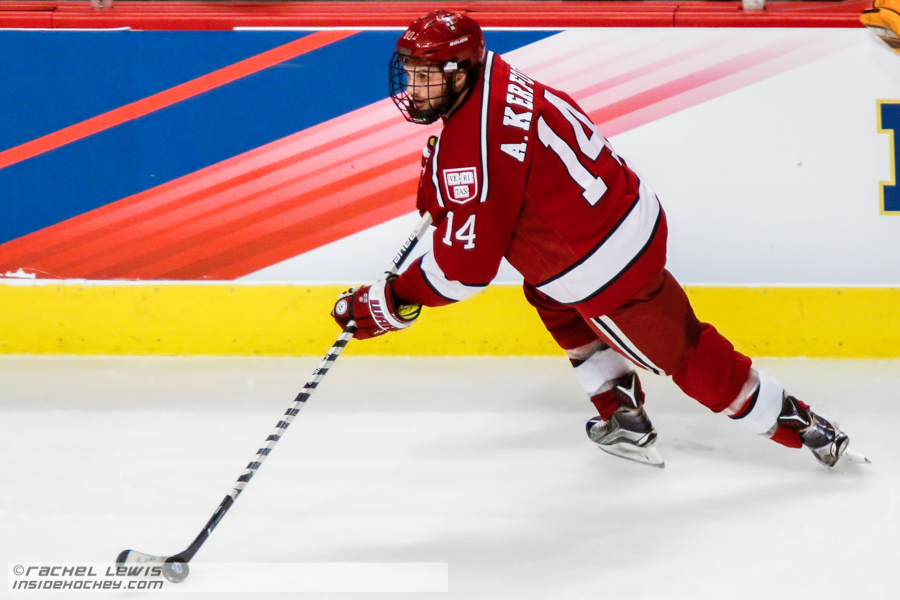 Alexander Kerfoot (HAR - 14) carries the puck across the ice.

The rivalry between Harvard University and Yale University extends back to Yale’s founding in 1701. The hockey rivalry started in 1900. On Friday night, the Crimson and Bulldogs met for the 257th time at the Bright-Landry Hockey Center, in Brighton, MA. In the newest edition of the rivalry, Yale played David to Harvard’s Goliath, upsetting the third-ranked team in the nation in a war of attrition.

Yale got the early jump on the Crimson, outshooting Harvard 10-7 for the first period. Merrick Madsen made some difficult saves early and kept his team in the game. The Elis kept up the attack on Madsen and beat him just after the halfway mark of the period. Ryan Donato looked to move the puck out of his defensive end but threw it to Mitchell Smith. The sophomore whipped it by Madsen to give Yale a 1-0 lead 7:28 into the game. 26 seconds later, Yale doubled their lead with Robbie DeMontis’s left circle shot. Madsen recovered to make some impressive saves and Harvard upped their shot total, but the Bulldogs took a 2-0 lead into the first intermission.

Harvard jumped on the Bulldogs with a prolific shout output. The Crimson fired 21 shots on Bulldog goaltender Sam Tucker. Only 2:05 into the period, Ryan Donato drove the puck into the offensive zone, stiff-armed Ted Hart to the ice, and got the puck on Jake Horton’s stick in front of the crease. The Crimson Captain got Harvard on the board. Harvard got a power play chance when Yale skated too many players at 5:01 into the period. 22 seconds into the power play, Adam Fox carried the puck behind the net, fed it onto Lewis Zerter-Gossage’s stick in front of Tucker, and the Crimson junior buried the shot to tie the game. Harvard kept up the attack, but could not get the lead. Yale, meanwhile, regrouped and reclaimed the lead.

Robbie DeMontes won a race to the puck in the neutral zone. He saucered by a diving Ty Pelton-Byce, and onto Luke Stevens. The sophomore went to his backhand to beat Madsen over his left shoulder for a 3-2 Yale lead. With the period winding down, Yale went on the power play when Jacob Olson was called for tripping. Ryan Hitchcock carried the puck through the neutral zone, fired it from above the left circle, and beat Madsen for a 4-2 Yale lead. Throughout this period, Tucker played some of the best hockey of his career. The junior from Wilton, CT, made 19 of his 33 saves in the second period and stifled two of Harvard’s three power plays in the period to keep Yale in the lead at the second intermission.

The final period slowed down following a frantic second. Both teams hit double-digit shot totals in the second. Neither hit double digits in the third. Harvard only outshot Yale 7-5. Unfortunately for Harvard, they let the physicality of the rivalry get to them. Jacob Olson was called for his third penalty of the game. With 41 seconds left on the penalty, Jake Horton decked Evan Smith hard into the boards. The Crimson Captain was called for a 5-minute major boarding penalty and a ten-minute game misconduct penalty. Harvard had to kill off 6:19 of special teams play. They did so, but they lost all potential momentum. They tried getting possession in the Yale end so they could pull the goalie and cut into the lead late. They never got that chance. Yale stopped Harvard in the neutral zone, and with Madsen still in net, Kevin O’Neil ended the game with the first goal of his career. Yale closed out a 5-2 win on enemy territory.

Harvard coach Ted Donato was complimentary of Yale following the game. “They made every big play they needed to. We didn’t. They were the better team and they deserved to win.” With the loss, Harvard drops to 1-1 on their young season. They will look to rebound against the Bears of Brown University for the final home game of the calendar year. Puck drops at the Bright-Landry Center on Saturday night at 7 pm.

For his 2 point game, Robbie DeMontes was awarded the Tim Taylor Cup as the best player in the Harvard-Yale hockey game hosted by Harvard. He had one goal and one assist. Yale improves to 2-1-0 on the season and served a major upset to their ancient rivals. The Bulldogs wrap up their weekend road trip with a ride to Hanover, NH, to play the Dartmouth Big Green. Puck drops on Saturday night at Thompson Arena at 7 pm.