New York, NY- Harvard and Cornell are the most decorated ECAC Hockey teams and it’s most bitter rivals. A hundred fifty-two matchups and a combined three National Championships have built a rivalry that stands up with any in the sport. On Saturday night, the two took their war to one of the sports’ most hallowed venues, Madison Square Garden, for the first time. The teams treated the New York City fans to a spirited display of college hockey’s finest qualities. While the crowd leaned heavily towards the in-state Big Red, the 10,000 men of Harvard claimed victory.

The opening frame was even but went in Cornell’s favor ultimately. The only goal came when Alec McCrea wound up a shot from the point and freshman Liam Motley tipped the puck through Harvard goaltender Michael Lackey for his first collegiate goal and a 1-0 Big Red lead that held into intermission. Each team got a chance on the power play, but no additional goals went on the board.

Harvard tilted the ice in their favor for the second. The Crimson outshot Cornell 11-7 and exploited an unusually weak Big Red backcheck. Early in the second, Morgan Barron took a cross-checking minor and Lewis Zerter-Gossage got Harvard on the board with a rebound shot on the ensuing power play. Near the midpoint of the period, Harvard created a two-on-one resulting from poor Cornell defense. Longtime friends and fellow Edina, Minnesota, natives Casey Dornbach and Henry Bowlby rushed the puck back to the Cornell end and Bowlby got behind Galajda for the score. Harvard took a 2-1 lead into the second break. 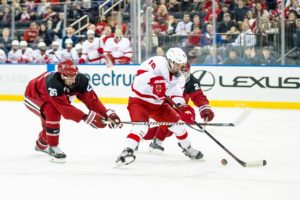 Cornell fired up their fans in the early stretches of the final frame, peppering Michael Lackey in net with 15 shots. Unfortunately for the enormous, mostly Big Red crowd, Lackey played his best game of the year. He stopped all 15 shots he faced in the third, completely robbed the Cornell forwards, and stopped 30 of 31 shots faced. At the other end, Cornell’s checking game was still lacking and Harvard capitalized. Henry Bowlby found a breakout opportunity off another Dornbach pass and backhanded a shot through Galajda for his second goal of the night. Dornbach got his third assist of the night, a career high for the freshman. CU pulled Galajda for an extra skater with almost four minutes remaining, but to no avail. Adam Fox potted an empty-netter to cap the scoring at 4-1 and giving a much-needed win to the Harvard Crimson.

Crimson Head Coach Ted Donato was typically understated yet happy with his team’s effort and output.

“We used our speed to get back to pucks,” Donato said. “Michael Lackey played a very good game and that allowed our D to make one good breakout pass. We knew it would be a battle. They’re a tough team to play against. We have a lot of young guys in key roles, but what was exciting is that they really wanted to be out there.”

Harvard improves to 3-3-2 with their first win in four tries at Madison Square Garden.

“That’s the least physical I’ve ever seen a Cornell team play in a game against Harvard,” Schafer said. “Played with no poise, played with no jump, I don’t lnow what it was. Just seemed like we had no life on the bench.”

This game did not count toward the ECAC Standings, but both teams return to conference play next week. Harvard hosts Colgate on Friday night at Bright-Landry while Cornell visits Dartmouth at Thompson Arena. Both games are at 7:30 pm. The main event is the next night, though, with a rematch at Bright-Landry between these ancient Ivy League rivals. Puck drops at 8 pm next Saturday night in Allston.