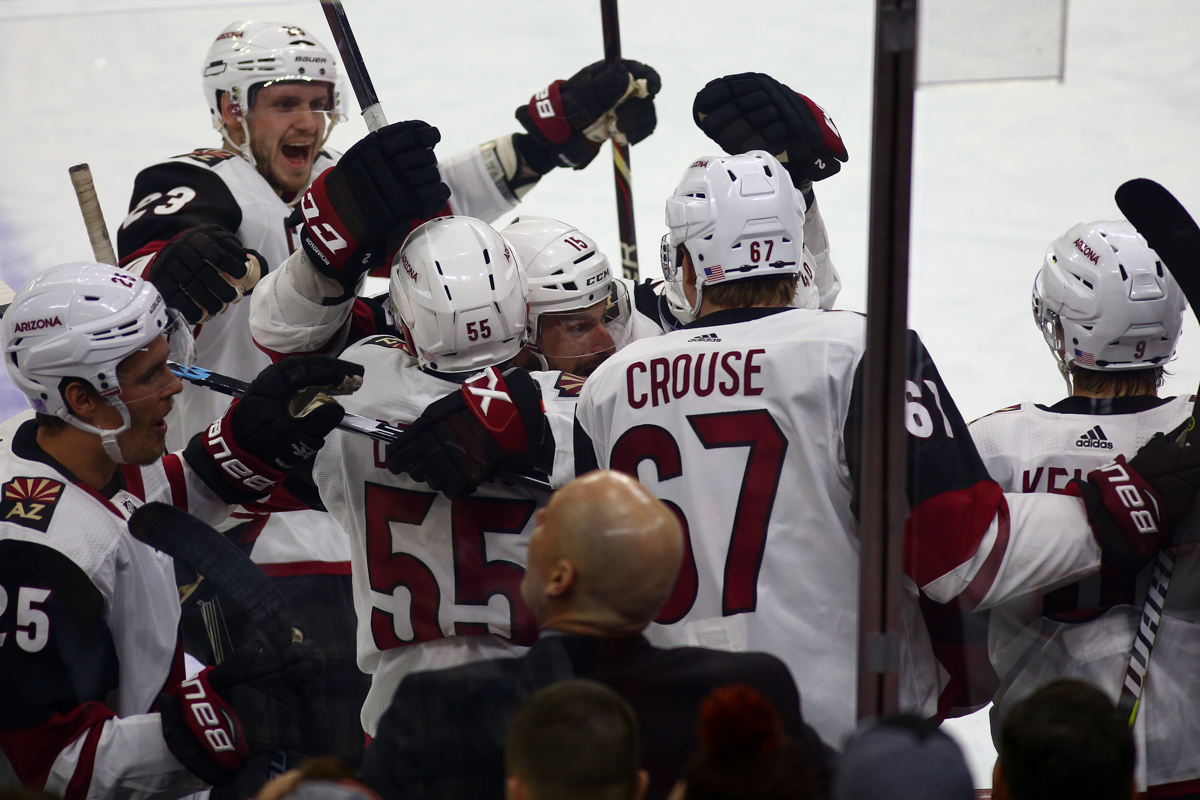 Members of the Arizona Coyotes celebrate a short-handed goal

NEWARK–For some teams, the NHL season, less than a full month in, might seem as if it’s easing into the expected grind. Others though would strongly disagree. Such was the case in a Friday night tilt between the Devils, playing in their first contest in nearly a week and the Coyotes, who impressively completed a 5-3 come-from-behind victory on Friday playing for the third time in four days.

Arizona, who by virtue of division is already among the NHL leaders in miles accumulated throughout the season, not only entered Friday playing their sixth road game in their first 10, they also saw their fifth Eastern Conference opponent–they’ll have seen seven by Oct. 31. The current trip in the New York Area concludes Monday against the Sabres, a chance for the Coyotes to win three of four and nab another two points–they’ve earned 13 of a possible 20 to start the 2019-20 campaign.

Their start on Friday appeared like they were destined to exit Newark without a point. Sami Vatanen got a piece of a net-front goal to give New Jersey the early lead. Rookie, Jack Hughes would tally minutes later on the power play, scoring his second career goal–part of a three-point night and first multi-point game. Arizona would cut the lead in half before the end of the first thanks to a strong wrist shot from Nick Schwaltz after a great pass from Oliver Ekman-Larsson at 19:43 of the opening frame.

The two teams went tit-for-tat in the second–ex-Devil Michael Grabner scoring on a shorthanded breakaway 2:01 into the period to even the score. And when Pavel Zacha put on the jets after being sprung for a chance from the outside by Hughes, the elation of fans at the Rock over the go-ahead goal lasted just 30 seconds, Ekmann-Larsson capitalizing after Arizona’s forecheck kept the Devils pinned in their own zone.

One Coyote unphased by the recent stretch of games, Barrett Hayton, entered Friday playing in his third game of the season and first since Oct. 12. And after Schmaltz stripped the puck away from Miles Wood, he found Hayton opposite him on a two-on-one to burry his first NHL goal and hand the Coyotes their first lead of the game 1:45 into the third.

Antti Raanta stopped 32 shots on the night including 11 in the third, where a late New Jersey power play that needed a hero, saw Raanta shut the door and get some insurance from a Clayton Keller empty-netter. Raanta, who played two seasons in New York, knows travel is part of the game, but some places have it tougher than others.

“It’s tough when you’re on the road for 5-6 days,” the goalie said. “And you come from the second game in a back-to-back and the other team has been fresh and it’s a tough building and they have lots of skill in their offense. You just try and get that first 10 minutes underway and then you battle. When it gets to a defensive battle–it takea a lot of mental toughness to come back from there.”

The travel for Arizona figures to only intensify this season. Next month, they’ll play 9 of 16 at home, but have three sets of back-to-back’s including five of six away from home. Life won’t get any easier when the expansion Seattle franchise joins the NHL in 2021-22, the Coyotes shifting from the Pacific to the Central–the 800+ mile Avalanche being their closest division opponent, 530+ more miles than the Yotes would log in their regular meetings with the Golden Knights and 445+ more than versus the Kings and Ducks in the Greater Los Angeles Area.

Mackenzie Blackwood started his third-straight game for the Devils. After allowing four goals on 16 shots, head coach John Hynes declined to review his netminder’s performance before reviewing the tape.

Prior to puck drop, D, Will Butcher was activated off of IR. D, Connor Carrick (upper body) was placed on injure reserve.

ARI: The Coyotes travel to Buffalo to finish off a four-game road trip.