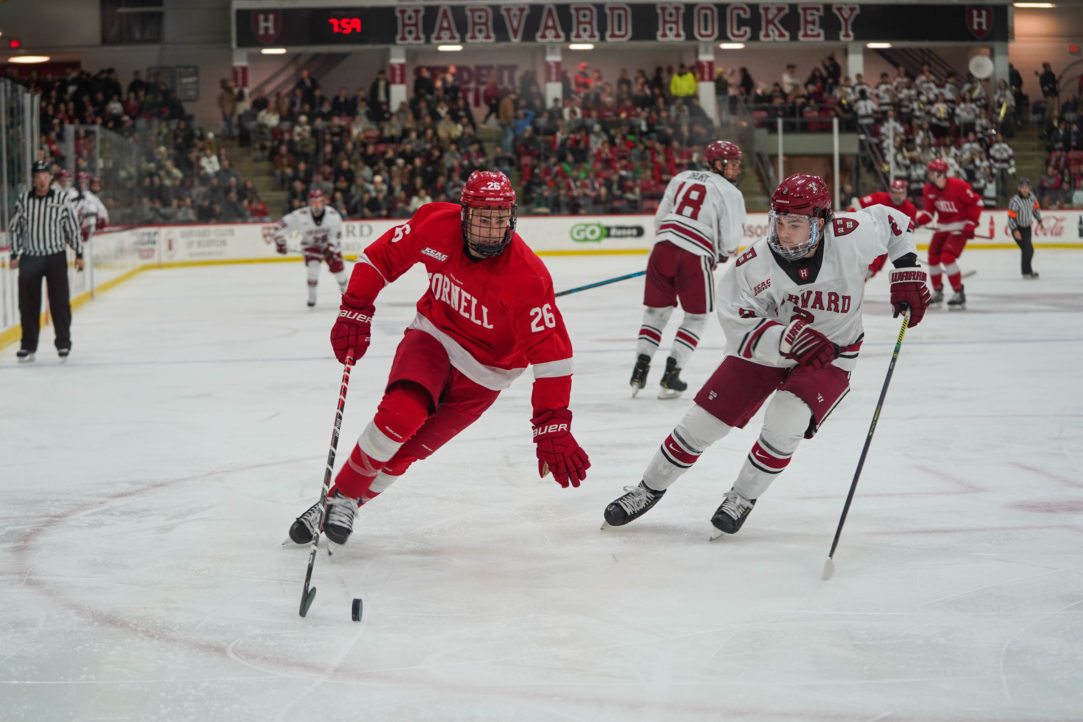 Allston, MA- Ivy League rules prevent six college hockey teams from playing until late October or November. Despite the shortened schedule, the head of the Ivy League is also one of the nation’s best. Cornell features remarkable size, great scoring touch, classic Big Red physicality, and phenomenal goaltending. They put all their skills on full display against their chief rival, Harvard, in a Top-10 showdown on Friday night and extended their perfect start.

The first period was as dominant a display as any in the sport this year. Cornell outshot Harvard 17-4 and piled up 10 shots before Harvard even got one. Harvard freshman Mitchell Gibson held his own in the Crimson net, but could not stop everything. Big Red Captain Jeff Malott cleaned up a rebound in the crease and backhanded the puck through Gibson for his third goal of the year. To close the frame, Brendan Locke capped a Tristan Mullin wraparound to make the score 2-0 at intermission.

The Cornell onslaught continued to open the second. Travis Mitchell layered a shot through Gibson for a 3-0 lead. An exasperated Crimson Coach Ted Donato called for time hoping to rally his squad. Harvard did show some life. Sam Malinski took an interference minor. On the ensuing Crimson power play, Jack Rathbone fed Nick Abruzzese for a perfect one-timer.

Harvard controlled the third period’s pace, winning the shot battle 15-4. Junior goaltender Matt Galajda stopped every shot to run his evening’s save total to 23 and Cornell completed their 3-1 victory.

Donato was disappointed with his team after the game. “They pinned us in the zone. We just didn’t execute some simple plays. I just felt, the first period, for the most part we watched. Good teams start the game on time. The second half of the game was much better. But they’re too good a team to spot three goals and expect good results.”

Harvard ends their first semester of play against Colgate on Saturday night. Puck drops at the Bright-Landry Hockey Center at 7 pm ET.

Head Coach Mike Schafer spoke highly of his squad after the game. “We wanted to play a disciplined game and for the most part we did that. We’re over the tipping point of worrying about the polls and now we just want to grind it out.”

Cornell concludes their first semester against Dartmouth on Saturday night in Hanover. Puck drops at 7 pm at Thompson Arena.