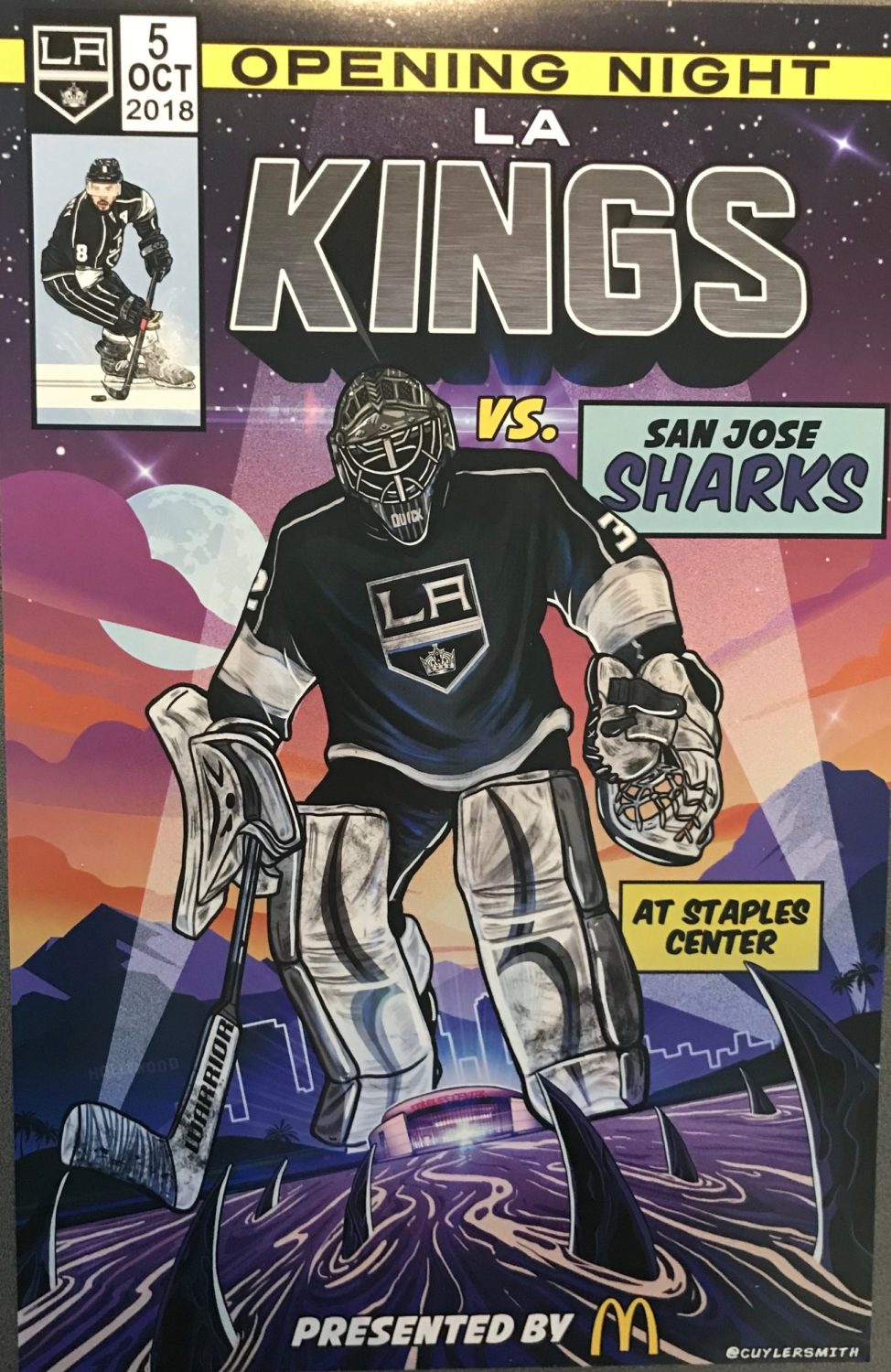 The Kings came out to play Friday night. They almost never play on Fridays. They’ll be back at it on Sunday evening. That’s unusual, too. What wasn’t out of character was their performance. They could get two goals but not the third, and they lost to San Jose in OT.

Let’s say the obvious thing: they should be scoring more. They’ve got Kovalchuk. But one player does not reform a system, and no matter how nebulous the idea of “system” is (ask players to describe it—they can’t, unless “get the puck in deep” is a system), nothing works if you don’t put the puck in the net.

LA can’t do that as much as they would like. And especially not against an aggressive, forward-moving team like San Jose. The Kings started the Toffoli-Carter-Pearson line. The followed up with the trio of Iafallo, Kopitar, and Kovalchuk. San Jose had the momentum from the early going. But wait; there’s good news. The Kings took it back.

But for starters, the Sharks opened a 2-0 lead in the first period. Both goals came off turnovers and were fired from long range. The first was a wrist shot from inside the LA blueline that might have hit a checking Trevor Lewis as it came off Marc-Edouard Vlasic’s stick, but certainly grazed Timo Meier up around the neck area and lofted past the goalkeeper into the net.

It was the second Sharks’ shot of the night. The Kings also had two shots by that point. The second San Jose goal was again a turnover, this time at the wall near the LA blueline. Donskoi and Suomela contrived to steal the puck and put it to Kane, who moved in and fired short side up over the left shoulder of Quick.

But let’s back up a few hours to give you a sense of the scene. Here’s how the evening started: The LA players pulled up into the adjacent garage in their personal cars, got out, and walked a red (actually I think it was black) carpet into the arena. Fans were gathered to cheer them on. There was a balloon arch. This all happened at 4:30 in advance of a 7:30 start.

When the announcer (Dave Joseph) called the house to order slightly after 7:30, the team personnel were introduced on the bench. Then the players who were scratched were acknowledged. Then each member of the entire team was introduced, music and strobe lights going like crazy. The place gradually filled up as this happened. (Hey, traffic’s heck in this town, and the Dodgers were playing up the street, making Friday night an even bigger nightmare.)

As they came out, players acknowledged the crowd. Kovalchuk was particularly good, doing a Savaardian Spin-O-Rama and raising his hands over his head in a clap as he skated from corner to blueline. Maybe, fans were likely thinking, this marriage is going to work out.

He and his mates got to work after the Sharks dominated the early going. In the period, Kovalchuk had two of the Kings’ eight shots, including a sweep rebound and a shot that came on the power play.

The Kings did score one goal in the period, by Kopitar from Iafallo and Forbort. Forbort threw the puck toward the net. It hit Iafallo and went to the far side of the net where Kopitar corralled it and put it in. Shortly after, Kovalchuk almost tied the game at twos when Tofolli and Forbort rushed into the zone off a turnover. The puck came back out from Martin Jones in the San Jose net onto Kovalchuk’s stick. He swept a shot that was turned aside.

The second period saw the Kings surge. They scored the only goal, knotting things at two, but that wasn’t the only impressive thing. Pearson had a mini-breakaway and saw the puck go under Jones’s legs and out again, wide.

Austin Wagner broke in, on the left side of the zone, and he chipped a puck high, hoping for his first goal. Jones got something on it. So the Kings were pressing, and they were better, and faster.

The Sharks need to take some responsibility, though. They gave the puck away a number of times, including on the LA goal. Was their energy lagging? They’d been defeated a couple of nights prior by the Ducks, at home. Was that enough to discourage a team with talent and speed and high hopes for the playoffs? Period three would have to tell.

Two scary moments punctuated the second period. Doughty went down in front of the Kings’ bench, behind the play. It looked bad—a knee? Nobody, it appeared, had touched him. He wasn’t pleased as he got up and tenderly went off. He was back a couple of plays later for the power play.

After the game, in the San Jose room, Timo Meier admitted to having given Doughty a “light tap on the shinpads.” “Like I was saying, good game to one of my own guys,” he explained. Where are the air quotes when you need them? “Explained.”

The end of the period saw Barclay Goodrow go into the corner with Jake Muzzin at the buzzer. Muzzin ended up on the ice, like he’d been concussed. The replay showed that Goodrow seemed to put out an elbow but in fact hit Muzzin with his back, nowhere near as severe, or as dirty, a hit as it had looked like at first. A penalty was announced for illegal check to the head as the third period began. Two minutes.

In the third period, according to Coach Peter DeBoer of the Sharks, “We were the better team.” The score didn’t show it. The game ended 60 with a tie still in place. On the way, though, each goalie made at least one spectacular save. Same style—spread-eagle with the chest. Quick’s came on a chance from Goodrow. He also made a number of other stops in close.

Jones made his best one against Wagner when the latter burst in on goal, stretching to really get a hold of the puck. He did, and flipped a shot. Leg save.

San Jose had two power play chances in the period. They wasted them with cutsie passing. Then in a game of copycat, seemingly a theme for the night, the Kings did the same. Iafallo to Kovalchuk to Kopitar and back. Too much dishing.

In OT, the Kings had no shots and the Sharks two, one of which went in. Kevin Labanc got it, and he described it as “just tucking the puck under him” when asked about it afterwards.

The overtime period showed a lack of energy for both teams, in fact. I thought it was headed to a shootout. The Sharks woke up at 2:54 of the frame.

Librarians: could you please request that your library catalogue my new book, Mixing Memory and Desire: Why Literature Can’t Forget the Great War? (Folklore 2017). Thank you!