Boston, MA- In 2012, UConn’s Men’s Hockey program played in the Atlantic Hockey Association, Northeastern hadn’t won either a Beanpot or a Hockey East Tournament since the Reagan Administration, and Mike Cavanaugh helped Boston College to a fourth National Championship win in twelve seasons. There was never a thought of the pair of Huskies meeting for anything of significance.

In the decade since, Cavanaugh took the Head Coaching job in Storrs and transitioned the Huskies into Hockey East, Northeastern ended their Beanpot and HEA Title droughts, and the two made a trip to TD Garden to play against each other in the Hockey East Semi-Finals.

With both teams needing a win to secure a trip to the NCAA Tournament, UConn set the pace early and often. Connecticut’s Huskies landed the game’s first blow near the opening stanza’s mid-point. Minnesota Wild draft pick Vladislav Firstov punched home his 11th goal of the season on a rebound off Devon Levi’s pad. Northeastern answered following a Carter Turnbull slashing penalty. Aidan McDonough capped a beautiful power play with his 24th goal of the season and an even 1-1 score after the first period.

UConn continued the attack in the second period, outshooting Boston’s Huskies 16-10. The only goal of the period came on a crazy scramble that    ended with defenseman Roman Kinal knocking in his third goal of the season.

The blue-clad Huskies held the pace and rhythm advantage in the final frame, outshooting the white-clad Huskies 9-8. Toronto Maple Leafs draft pick Ryan Tverberg deked out HEA Goalie of the year Devon Levi and made the score 3-1 4:32 in. Northeastern pulled Levi for an extra attacker but could not score. UConn captain Carter Turnbull landed several heavy checks and alternate captain Marc Gatcomb ended the scoring with an empty netter. Northeastern nearly had a goal in the final seconds, but the officials waived it off to end the scoring at 4-1.

“Credit to UConn,” said NU Head Coach Jerry Keefe. “They deserved to win. I thought they stuck to what they did well. It took us too long to get it going.”

Boston’s Huskies wait for the result of Saturday’s College Hockey championship weekend. In order to advance, Northeastern needs two of UMass, Minnesota State Mankato, or Quinnipiac, who are favorites to win their respective Conference Titles and would steal no at-large bids, to advance to their seventh NCAA Tournament. If two or more upsets happen, then the collegiate careers of Jakov Novak, Tommy Miller, Julian Kislin, and Jordan Harris would come to a conclusion. Both Kislin and Harris are Montreal Canadiens draft pics and both are possible signees at the season’s conclusion.

UConn improves to 20-15-0. This is the first 20 win season since 1998-99, when UConn was a member of the MAAC Hockey conference, and the third such season in the program’s history.

“We came in with the intention of winning the tournament,” explained Coach Cavanaugh. “I thought last week against BU, we sat back a little bit and protected the lead. Tonight I thought we played on our toes in the third period and played a really strong game, a full 60.” 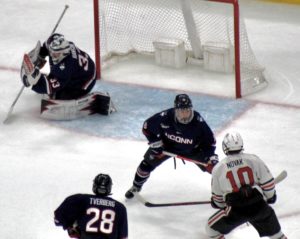 “I think we faced much more adversity than we would have expected preseason,” explained the East Bethel, Minnesota native. . I think because of that we flew under the radar throughout the year. But I think that’s only helpful for us. Adversity has only made us stronger.”

Connecticut’s Huskies advance to the program’s first Hockey East Championship game and first title game in any conference since 2000, when the Huskies hosted the Iona Gaels for the MAAC Tournament Championship. They’ll face the Massachusetts Minutemen at TD Garden. Puck drops at 7 PM on Saturday night.