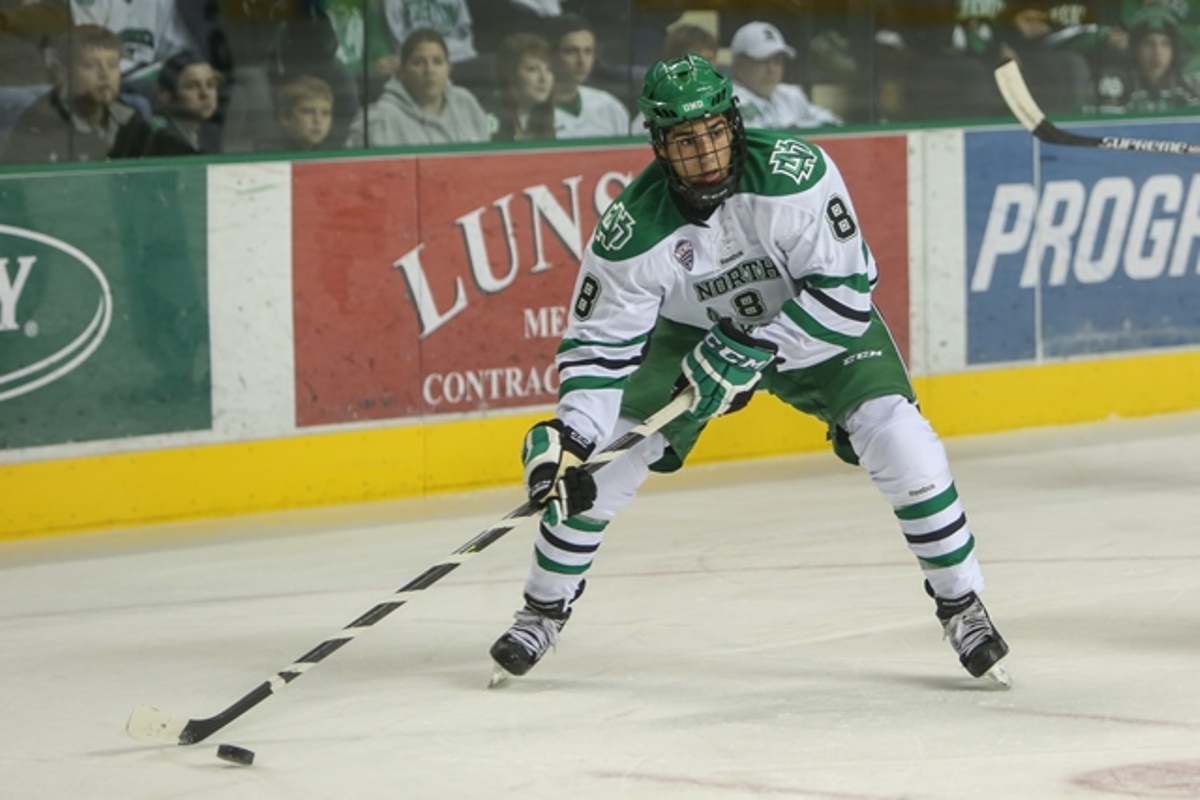 Grand Forks, ND – A look at the calendar told us that March 15, 2014, wasn’t Ground Hog Day. Funny, it sure felt like it.  After giving the Colorado College Tigers a two-goal lead the night before, UND coughed up another two-goal lead again, a night later. Through two periods of play, UND looked like the team that had lost 23 games, not the Tigers.

The Tigers would get goals from Peter Stoykewich and Scott Wamsganz to give the Tigers a 2-0 lead. UND would answer with a goal from Drake Caggiula. UND would go into the third period down 2-1.

In the third period, UND would finally get the game-tying goal from Jordan Schmaltz with just under four minutes left in regulation. Tigers forward Alex Roos ended UND’s hope of a series sweep with the game-winning goal at 7:00 mark of overtime, sending UND fans to the exits with an empty feeling.

They say it’s very hard to end another team’s season, even a team that’s lost 23-of-35 games.  Tonight, the Tigers proved that theory. For a second night in a row, the Tigers came out the gates hungrier than UND.

“We were a team that played like a team that wanted to continue the season, as long as they could,” Colorado College head coach Scott Owens said.  “I give them credit, when they get a couple of their lines up and going and get into a rhythm, they’re very hard to contain. I am very proud of our guys. On any given Sunday anything can happen. It happened for us last year. We’re aiming to stay out and head to Minneapolis.”

UND knew the Tigers would be gunning for them. After Friday night’s game sophomore forward Bryn Chyzyk alluded to this, “I know they’re going to be really hungry tomorrow because it’s tough to end a team’s season.”

For a second night in a row, UND started slow and then took the momentum, but couldn’t break through against senior goalie Josh Thorimbert who stopped 44-of-46 shots and improved to 7-22-6 with the win. UND goalie Zane Gothberg stopped 26-of-29 stops and dropped to 16-8-3 with the loss.

“I thought we built our game through the 60 minutes, head coach Dave Hakstol said. “We probably wanted a little bit better start. We didn’t give up a whole lot, but we didn’t generate a whole lot in the first 10 minutes of the hockey game.”

UND has been to the NCAA tourney 11 seasons in a row and with the loss to the Tigers sit at 15th in the Pairwise Rankings. If UND doesn’t win this series, they would be hard pressed to make the NCAA tournament for a 12th consecutive season in a row.

“Its do-or-die,” UND defenseman Jordan Schmaltz said. “If we win, we put ourselves in a good chance to get in the national tournament. If we don’t, we could see our season ending early.”

UND forward Stephane Pattyn also echoed those sentiments, “I think that should be our mentality. That’s the way they played tonight. I think we’re going to have to match that and maybe play harder.”

UND has lost the last three Saturday games and is 3-3-0 in their last six games.

For just the second time in three months, UND goalie Zane Gothberg allowed more than two goals. Both times was against the C.C. Tigers.