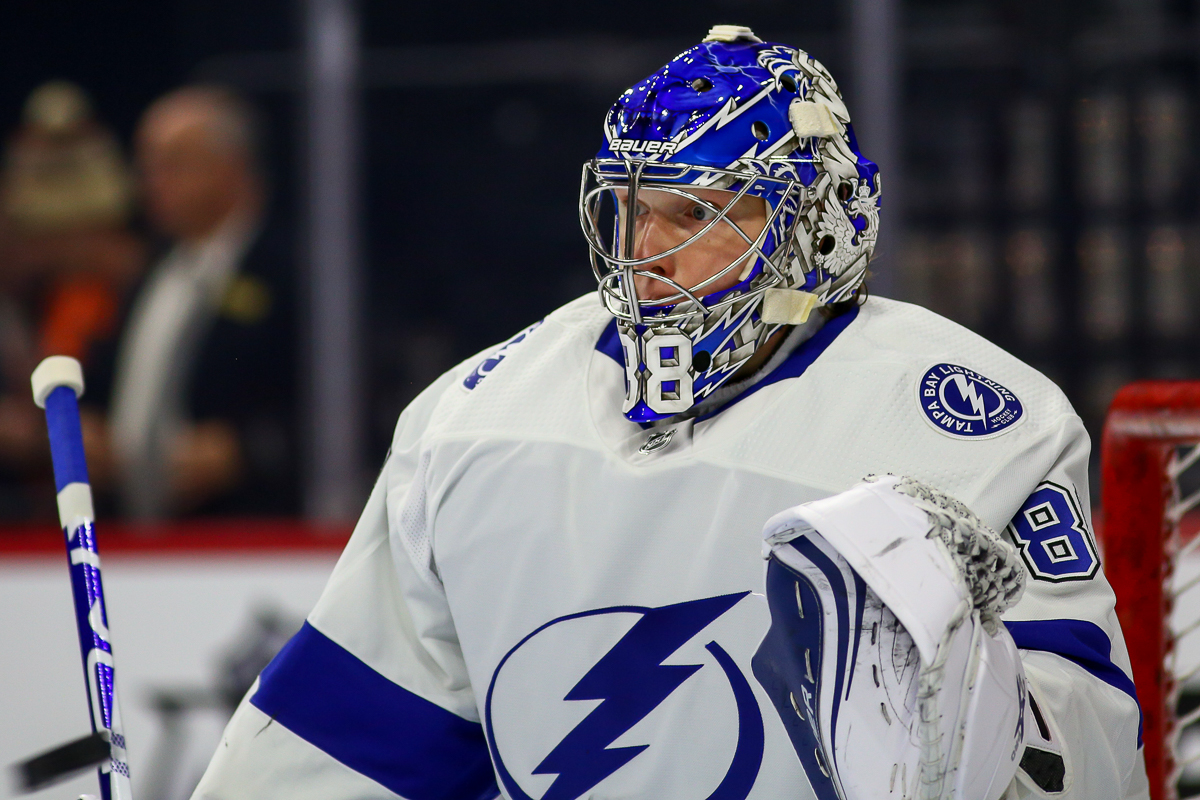 TAMPA – ACDC belts Thunderstruck more in Amalie Arena than it did on any one of it’s concert tours from yesteryear and it was appropriately recreated at 19:59 into the second period of Tampa Bay’s 3-1 win over Montreal in Game 2 of the Stanley Cup Playoffs.

It was a moment that will forever be a part of Tampa Bay sports history and it was co-authored by Barclay Goodrow and Blake Coleman.

Goodrow flipped the puck to Coleman as time was about to run out in the second period. Coleman dove to the ice and outstretched the sticky defense of Montreal’s Phillip Danault and poked the puck in the goal to give Tampa Bay it’s lead once again and once and for all at 2-1.

“A reflex really,” said Coleman. “I knew they had a back checker there and I just tried to beat him to the puck. I don’t think anybody was planning to dive on the ice. At that moment that was all we had there and I mean Goody couldn’t have put it in a better spot.”

Coleman’s heroics saw the puck go five-hole on goalie Carey Price as it went in with just 0.3 seconds left in the second period. It ended a second period that was dominated by Montreal, but the Canadiens couldn’t come up with more than a goal.

“I knew time was tight and I heard our bench yelling, ‘Shoot,'” said Goodrow. “I saw the puck cross the line and there was still time on the clock, so it was a big goal for us and something we desperately needed at that time.”

Lightning coach Jon Cooper thought back to last season’s playoffs when Coleman completed a similar play vs. the Boston Bruins in the bubble.

“I thought, ‘Did he just do that again?'” said Cooper. “It was remarkably similar. The timing was perfect and a big lift going into the third.”

Goodrow and Coleman came to Tampa Bay last February as Coleman came first from New Jersey and Goodrow came in from San Jose about a week later. They’re connected to the immediacy in which the Lightning brass wanted to put them together and the chemistry has worked on the ice, but never in the dramatic fashion of in Game 2.

“You are looking for winners and Colzy and Goody are winners,” said Cooper. “In a time of the year where every shift is under a microscope and where players who aren’t used are playing with grit. Games are elevated and the microscope is on you.  There’s guys that rise to the occasion and guys that don’t and for these guys the moment never seems too big for them.”

Goalie Andrei Vasilveskiy was his usual impeccable self on Wednesday evening as he stopped 42 of 43 pucks and the 42 stops were the second most in his 78-game playoff career, this far. Midway through the first period, Nick Suzuki slid in on Vasilevskiy and before he could offer the shot, Vasilevskiy applied the poke check and knocked the puck away.

The save was a foreshadow to the level at which Vasilevskiy competed for the entirety of 60 minutes.

“It was more our team game was off,” noted Cooper. “There were some remarkable individual performances tonight -Vasy, Coleman and a couple of others. An unremarkable team game we had going on. Vasy – we are used to seeing this from him and he definitely gave us a chance at winning this tonight.”

Montreal outshot Tampa Bay, 29-13, through two periods and 43-23, overall. Vasilevskiy was in a zone as he was undeterred through the entirety of the night. Perhaps it was an answer to Vegas goalie Marc Andre-Fleury being voted the Vezina Trophy winner earlier in the day.

“He was the competitive gamer we know he is tonight and he is the backbone of this team,” said Tampa Bay’s Ryan McDonagh. “We wanted to make it easier, but he is a warrior and competitor and he showed it again tonight.”

He also had a defining moment as he worked with the penalty killers in snuffing out a 4-on-3 and a 5-on-4 power play after a double-minor high-stick on McDonagh at 17:32 in the first period.

The Bolts were able to get their feet under themselves in the third period and ward off what was a tough two periods as Montreal came out desperate after Monday’s 5-1 loss.

Ondrej Palat added the third Tampa Bay goal of the night when Montreal’s Joel Edmundson tried to flip a pass from behind his net, but Palat step in front of the pass and discarded it in the net off of Carey Price’s skate.

Vasilevskiy once again dimmed the wick of the Canadiens’ candle when the pulled their goalie with about two and a half minutes remaining.

“We needed to start with our compete level, come up with more pucks and stop them in our D-zone and  take the game over from there,” said McDonagh. “Thankfully there was one guy whose level was where it needed to be and this guy over here was giving us a chance and it was a great feeling in the end to come out on top and gut it out.”

Montreal’s lone goal came after rookie Nick Suzuki took a face-off and backhanded the puck into the net as he flipped  it between Lightning defenders Yanni Gourde and Anthony Cirelli to tie the game at 1-1 at 10:36 in the second period.

Cirelli, who saw more ice time with Alex Killorn our with a lower body injury, opened scoring at 6:40 when Tyler Johnson sent the puck to Cirelli who was waiting inside the blue line. Cirelli fired a wrist-shot through Price as Jan Ruuta’s presence at the net also caused an issue for the Canadiens’ goalie.