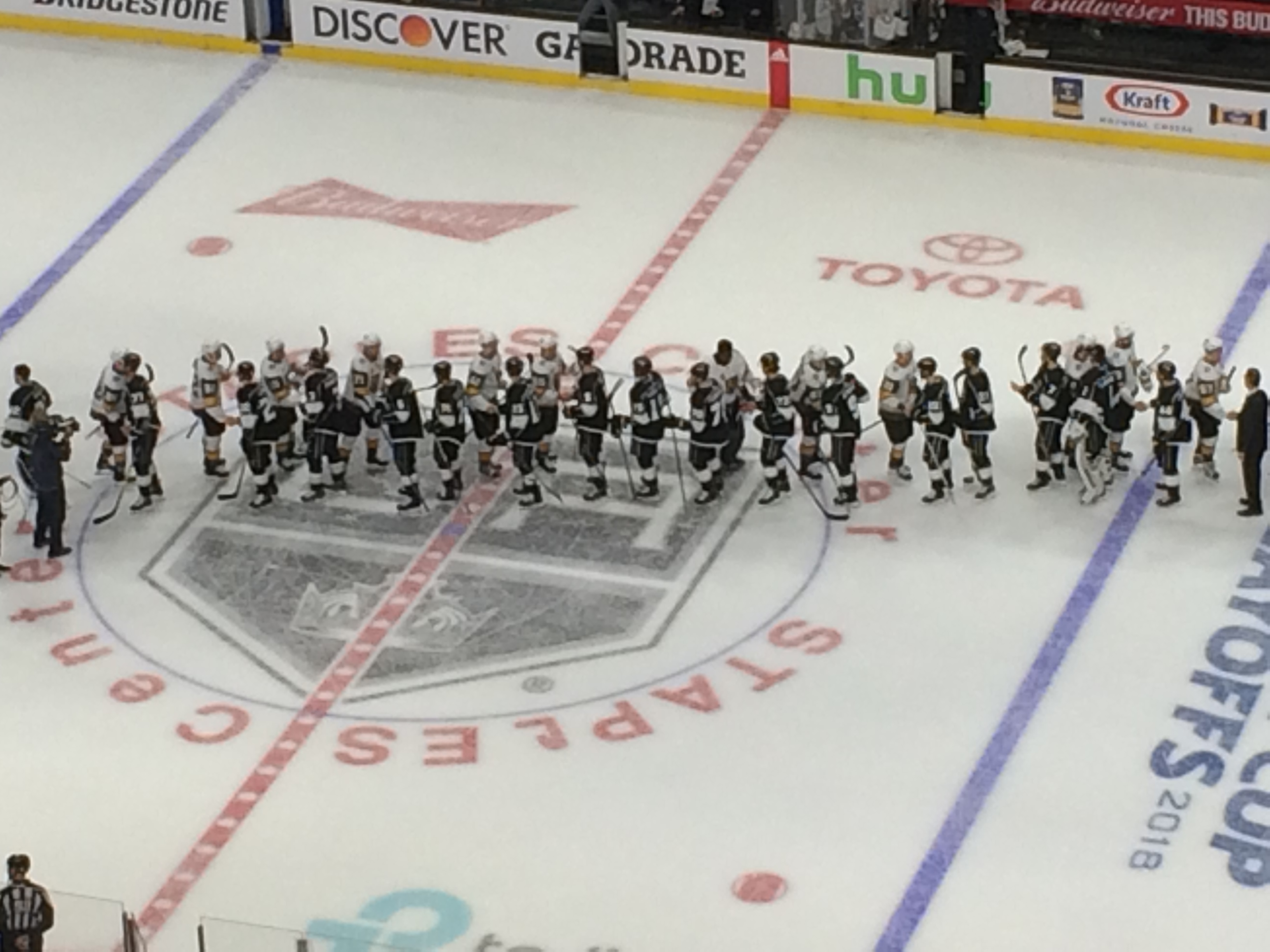 The Golden Knights-Kings series has been a goaltending battle for the ages, with each game being decided by one goal in an ascending range. The first, 1-0; the second, 2-1 (OT); the third, 3-2. As the fourth began, the Kings were facing elimination. You might thus have expected a big push and, should things just fall and fall and fall their way, a big score.

In fact, they came at Vegas hard, especially in the first period. And they played a solid game, mostly focused on offense, as the night wore on. But the puck wouldn’t cooperate with them. It bounced and jumped and rolled, but never quite where they wanted it to go. Kind of reminded of the old saying, “If it weren’t for bad luck, they wouldn’t have any luck at all.” In a tight game that is part of a tight series, you have to get a bounce. They waited. It didn’t come.

Period one, nobody scored. The shots were 14-8 for the Kings, so you might rightly assume that the home team pushed, and they did. The first eight minutes, they controlled the play. The Vegas team waited. Fleury stopped the puck. And then Vegas responded. Quick held.

Of note on the LA side: the “that 70s line,” reunited a game ago, was playing well. The key, rather than in the past where Carter would do all the work, was the toil of Tanner Pearson on the left boards. Three times in the frame, he dug pucks off the wall, once after Jeff Carter made a hard check, and fed them to the front.

Early in the period, after the first push, Kopitar and Doughty went down two-on-one, but they didn’t get a shot off. The best chance came late, when Carter put a puck right to Toffoli, who then took a shot that was deflected by the reaching stick of Deryk Engelland. There were several other close calls. With 19 seconds left in the first, Trevor Lewis knocked a puck over to Tobias Rieder in the slot. He took a backhand. Fleury was there. That sentence has been said a lot of late.

But so was the goalie on the other end. Quick grabbed a puck lying down and with an outstretched glove with Shea Theodore lurking around. He stopped one flung hard from the corner by Cody Eakin. He stopped two shots on a power play for Vegas after Kempe was caught for hooking.

Then period two started, and the Golden Knights scored their first goal. The play came from a broken chance in their own end. Marchessault took it out. He threw it to Reilly Smith. He dropped it to Karlsson. And he put it across to a trailing Brayden McNabb, who one-timed it past a spread-eagled Quick, who had no chance. Are you getting a theme? The Vegas defense is also the Vegas offense. In fact, had this series ended up being Ducks-Vegas, you would have seen almost mirror-image teams, so much inclined to rush is the Anaheim squad.

Not saying the Kings aren’t, with the already-cited example of Doughty-Kopitar in mind, but they don’t turn absolutely everyone loose, as the Ducks and Golden Knights seem wont to do.

The Kings responded with more shots. A puck was flung at Fleury, who saw it all the way. Mitchell fed it to Kempe in the slot. He couldn’t get a handle.

Coach Stevens started mixing his lines, trying to get something going. He had Kopitar, Lewis, and Pearson out about halfway through period two.

The Kings had a power play about midway through the period. Got two shots on it. You guessed it—Fleury. Again. The better of the two: Kopitar to Carter about six feet off the right edge of the crease. He took a low shot, and it got through the crowd in front. Fleury kicked it out with the trailing edge of a leg.

It stayed 1-0, while chances were traded. Not in a wild-ride kind of way, but in a measured way that says that each of these teams plays the fundamentals. There’s no crazy, loosey-goosey flights of offensive fancy. Witness this: The Golden Knights dug a puck out from behind the net. It went to Ryan Carpenter. He had just prior been knocked down very hard in the neutral zone by Nate Thompson. Anyway, the puck came to him, and he was surprised by it, but he still got off a backhand. Quick was playing without a stick at the time, and he got a glove on the puck and knocked it high. It eventually went over the net.

The line shifting continued. Carter was out with Pearson and Kempe, and they exploded. Pearson put the puck to Carter, who burst to the front with it. The puck rolled off his stick. That’s kind of how it was going for LA. Sure, Fleury was good, but the Kings didn’t get any breaks.

In the last minute of the period, Stevens reunited the Carter and the kids line, and he had Brown back with Kopitar and Iafallo. Nobody scored. The second saw seven shots apiece. Was this a defensive battle? No. Each team was trying for offense, and they were getting to the net. But for the Kings especially, the puck just wouldn’t cooperate once they got there.

The third had the crowd tense. Nervous. They had white towels which were being called “rally towels” even when the game was 0-0. Now they were encouraged to wave them, but most fans had them clumped up in their grip, leaning forward in their seats, hoping.

Quick stopped a shot off a drop pass from Marchessault to Karlsson. He made a glove save with the leg there to back it up. The Kings dodged another bullet when a puck was dropped to Perron, who whipped a shot just wide.

Then the Kings came on with the mid-period approaching. Kopitar and Brown tried a give-and-go that didn’t work. Then Kopitar took the puck off the right-side wall and circled to the blue line. He waited, and feinted his way in, past two guys. From about twenty feet out, he launched a shot, high. Fleury got it with his glove.

A play later, Brown took a snap shot from the right boards with Kopitar and Carter in front. Fleury was there.

If there’s any falling down in the Kings’ game, it might be that there wasn’t enough traffic, even with two guys in front. There was still a clear path to the net, and Fleury was seeing everything.

The Kings kept pressing. They got the break of a power play when Reilly Smith tripped Brown with about eight minutes left. The Knights cleared the puck off the faceoff. Then Toffoli tried to deke in and lost the puck. The Knights Bellemare flung it down the ice. Three times the puck came across the zone to Phaneuf. He finally got a shot off on the third one, but it was blocked.

Carter sent a puck to Kopitar out front. He didn’t take a shot, passing back to Doughty. This is so frustrating to write, because that’s precisely the problem that everyone thought used to (past tense) plague the Kings. It was supposed to have been solved earlier this year. Don’t pass up shots for passes was the mantra.

The best chance was a Carter wrister, but it went right into Fleury’s gut.

The PK over, Vegas got right down to defense. Kempe was turned away down the right side. Then Toffoli.

The lines continued to mix. Carter was with Brown and Kopitar. Kempe was with Pearson and Toffoli. Nothing worked. Someone shoveled a puck over to Rieder in front. He couldn’t get a stick on it.

Toffoli put the puck over with Kopitar and Carter in front. It went past Carter.

The last best chance was a rebound to Brown in the slot, and he got away a shot, high and hard. Fleury got a glove on it. It went up and over the net.

But here’s the thing: that puck never should have gotten to Brown. It took a funny bounce after a rebound, and ended up going diagonally to Brown in the slot. When that kind of oddity happens, the result is usually a goal. Not this time.

Fleury commented on the last save after the game: “The high glove one? Yeah, I just tried to come out at him, and I just got a little piece with the top of the glove. It was close, but good enough.”

He said he could not comment on the difference between this and other playoff series, but he did say, “I don’t think I’ve given up three goals in a series. That’s a little unusual maybe, but I’ll take it though.”

In the end, the Vegas team is faster than the Kings. They play good defense. And they got the breaks. Their coach commented on the “puck luck” after the game, which as you know, ended just the way game one had: 1-0.

Gallant talked further about the goaltending, crediting both guys, as he should have, with outstanding play. “There wasn’t much between the two teams. . . . There wasn’t a lot of scoring, and that’s (goaltending) is probably the reason. They played great hockey against each other; both goaltenders were exceptional, for both teams.”

He later added, “I give Fleury a lot of credit. He was unbelievable, but the other guy at the other net was incredible too. Fleury to give up three goals in four games and play the way he played . . . he was huge for us, at key times.” He singled out the save on Kopitar in the slot, saying it “was huge. For Fleury to get a hand on that shot, it was huge for our group.”

So how will you remember this series? As a Vegas sweep, this being the first time of many first times they’ve had this year? As a duel extraordinaire in net? As a time when the hockey gods intervened in Vegas’s behalf? Or as another example of why the LA Kings are frustratingly unable to score?

Depends on who you root for. Any which way, it was tense to watch, if not exactly fun. And those goalies, oh, those goalies. You’ll never see any better.