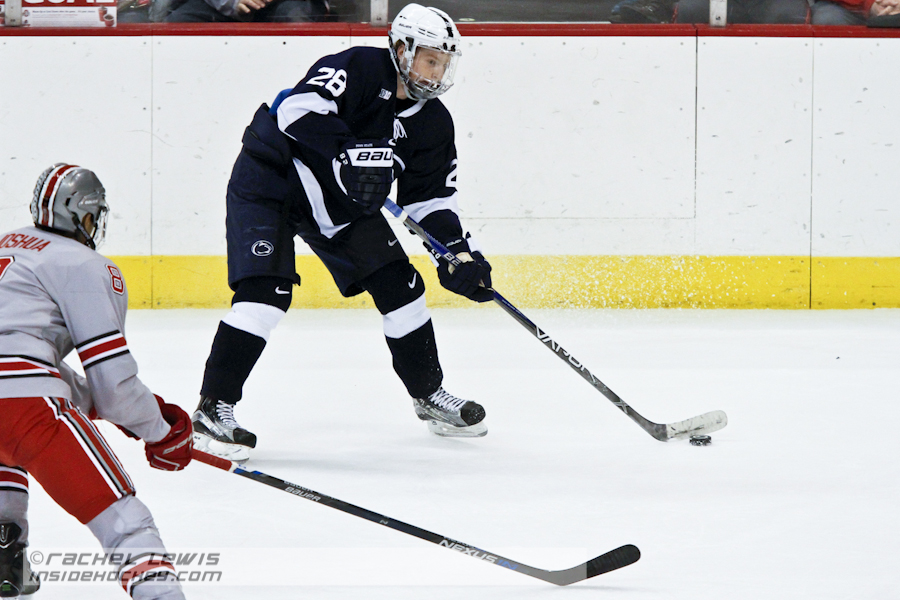 The state of Ohio has seen many important sporting events lately. Most of the big events have been up in Cleveland though. This weekend, four teams will take the ice in Cincinnati, giving some sporting attention to southwestern Ohio. Let’s take a look at the teams and how they matchup before play begins on Saturday afternoon.

This might be the only true mismatch in the entire tournament. Both of these teams are historic powers. Denver has the second most National Championships to their name, with seven, and the most recent coming in 2005. Michigan Tech has three titles but hasn’t won any since 1975. Their last Frozen Four trip was in 1981. The Huskies have experienced a recent program revival after close to thirty years of irrelevance. They will have the tallest order of any team in the opening round of the Tournament against the Pioneers.

Denver is universally regarded as the best team in the tournament and the favorite to not only make it out of the regional but win the National Championship. They won the NCHC and are loaded with talent from top to bottom. Four players have 30 or more points and 15 players have double-digit points on the season. Henrik Borgstrom, Dylan Gambrell, Troy Terry, and Will Butcher lead the Pioneers on the offensive end and have all been drafted by NHL teams. The defense is no slouch either, with the second fewest NCHC penalties, the fewest opposing goals per game, and the second highest winning percentage.

Veteran defensemen Adam Plant and Tariq Hammond join Butcher on the blue line and provide a bruising unit to aid the forwards who can generally play both ways. They have one more ace up their sleeve with Junior Tanner Jalliet in net. He tied for the second lowest GAA, sixth highest save percentage, and the sixth highest winning percentage. They have everything needed to win the program’s eighth NCAA Championship, which would tie them with North Dakota for second all time.

Michigan Tech is in the middle of a program revival. They finished second in the WCHA in the regular season and beat Bowling Green in the Conference Championship game in overtime. Tech has variety in who can score, but they don’t have a single scorer over 30 points for the season. All the leading scorers are juniors or seniors, with Joel L’Esparance, Matt Roy, and Shane Hanna leading the way. They are not bereft of offensive talent, but the Huskies do not have the Pioneer’s offensive punch.

Tech does have a defense that can hold up against any opponent, though. Seniors Cliff Watson and Shane Hanna lead the Huskies in blocked shots and set the pace at the blue line for the team that allows the second-fewest goals per game in the WCHA. The key to their defense is Freshman Angus Redmond, the man with the second lowest GAA, at 1.76. He has four shutouts this season and has paced the Huskies all season between the pipes.

Tech can stop people and Redmond will keep the team in the game. However, Denver is a more powerful offensive unit than Tech. The Pioneers are an experienced unit with Tournament experience, NHL talent at every position, and legitimate championship aspirations. Denver will win this matchup, though it will be closer than many might think.

This is another mismatch, but it sports two of the best stories in college hockey. Union is a school of only 2,242 students that competes on the national stage, is only three years removed from their first National Championship, and features the two top scorers still playing. Their opponents, the Penn State Nittany Lions, hail from one of the biggest schools in the country but have only been playing Division I Collegiate Hockey for five seasons. They are making their first NCAA Tournament appearance and already have a hard opponent in Cincinnati.

Union’s offense has powered them to another impressive season in Schenectady. Their top scorers, Mike Vecchione and Spencer Foo, are the top remaining scorers in the NCAA and Vecchione is a Hobey Baker Award nominee. He can make a case for his candidacy with a strong postseason performance, with 62 points on the season already. Sebastian Vidmar and Brett Supinski add even more offensive firepower to a loaded Dutchmen team that has the second most third-period goals in the nation.

Union’s defense is no slouch either, behind Senior Alex Sakellaropoulos in net. He’s not the best goalie in the ECAC, but he can play his position well and clear the puck for his team to get more scoring chances. He’s helped out by Jeff Taylor and Nick DeSimone on the defensive end. They can play fast and rough, but their best strength is getting the puck off their sticks to the forwards for them to control the pace of the game. If Union’s forwards can dictate pace, they will win.

Penn State can make a similar claim. They have the second best offense in the NCAA and are making their first tournament appearance after overtime victories against Minnesota and Wisconsin to win their first Big 10 Championship. They are the poster boy program for transitioning from successful club team into NCAA tournament team. Denis Smirnov and David Goodwin lead the way in scoring for Penn State and define the team: fast and shot happy. They also have the highest plus/minus for the first period in the NCAA, so they need to play with a lead in order to win.

At which point we arrive at the Nittany Lion’s weakness, their defense. Of all the teams in the tournament, Penn State is near the bottom in opposing goals allowed per game. Trevor Hamilton can play the blue line well, along with Kris Myllari, but the Nittany Lions do not lean on their defense to win games.

The Nittany Lion’s goaltending is also suspect. Peyton Jones is competent and has shown that he can play well in big games, but he barely cleared the .900 save percentage mark and has the second worst GAA of every starting goaltender in the tournament.

These teams will engage in a shootout. They have high powered offenses and competent defenses. Both will lean on their star forwards to get them points and a win. I think Union has the slightly better offense, especially in the third period, and Union has a superior defense and will hold off attacks better than Penn State will. Union will win and move on.

In the hypothetical matchup between Union and Denver, I think Denver would win. Union has the more potent offense, but Denver can score and the Pioneers have a defense that the Dutchmen envy. I think Denver will move on to Chicago for the Frozen Four.