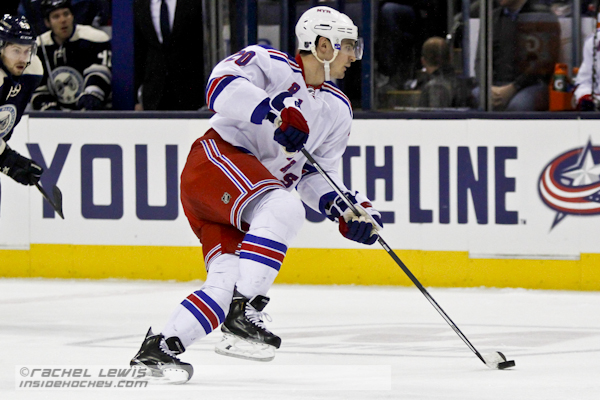 Chris Kreider (NYR - 20) skates the puck down the ice.

Last night against the San Jose Sharks, Chris Kreider became the first New York Ranger since Brian Leetch in the 1992-93 season to open a regular season with six points in three games. He ended the night with a goal and an assist in the Rangers’ 7-4 win over the Sharks. Kreider now has a career high three-game goal streak.

When asked what he has done during the off-season to prepare Kreider stated: “Didn’t change much. Same approach, same mentality.”

That may be so, but something is different. Maybe it’s maturity or maybe it’s the fact that he is playing with younger and faster players. I am going to say it’s a mix of both.

I have always been a fan of Kreider and have seen his potential as a player. Sure, when he first came up he needed to learn the speed and finesse associated with the game, but you could tell he had talent. I mean the kid was scoring playoff goals before ever playing in a regular season game. That has to tell you something.

What is great about Kreider is not just his speed, but also his size. He is one of the few forwards on the Rangers that will actually use the body. He hits, he grinds and by doing so he creates chances. Kreider has been sloppy with his body in the past, not knowing when to lay off or when to go in for the hit resulting in reckless penalties, but if the first three games are any indication of what we will see this season, then we may be looking at a more controlled and poised player.

Without Derick Brassard, the Rangers need another player to be that offensive spark. A player who can lift the offense in the most dire of circumstances. A player who is both smart and not new to the game. Kreider can be that player. Yes, he does not have the same passing abilities and vision as Brassard did, but he can fill the void left by him. He can become a leader on this team; somebody all the other 20 somethings look up to. Because on this roster, Kreider fits in more with the veterans than the newbies.

It is clear Kreider has left an impression on many people over the past few games. Some media outlets believe he is close to becoming a franchise powerhouse for the Rangers. And to be honest, I agree. Kreider has the skill set and the experience to have a breakout year and continue an upward trajectory for seasons to come. He is finally showing everyone that he can not only be powerful and quick, but also that he can be consistent.

Right now, Kreider is riding high and I don’t believe he has any intention of slowing down.