Boston, MA – The struggling Chicago Blackhawks (10-12-5) strode into TD Garden in the midst of a three game losing streak, while the Boston Bruins (20-3-5) were sitting comfortably on an eight game winning streak of their own. The Blackhawks ultimately squandered a three goal lead in the third period only to be rescued by their captain Jonathan Toews breakaway goal fifty-four seconds into overtime.

Patrick Kane was called for Hooking just thirty-three seconds into the game giving the NHL’s second best power play an early opportunity. Matt Grzelcyk had shot from the blue line squeak under the pad of Robin Lehner (37 saves) and just sat in the crease behind the goalie for a few seconds before Chicago cleared it away.

The Bruins carried play early on. A three on two rush ended with Anders Bjork feeding a trailing Brandon Carlo with a cross ice feed for a slapshot from the high slot that sailed high over Lehner.

Boston’s second line of David Krejci, Jake DeBrusk, and David Pastrnak had a few scoring bids turned away by Lehner.

Chicago defenseman Dennis Gilbert had a slapshot turned away by Tuukka Rask (27 saves).

Anton Wedin was called for Tripping at 16:35. Bruins defenseman Charlie McAvoy misfired on a pass at the blue line that allowed Chicago’s Ryan Caprenter to steal the puck and breakout on a three on two. Carpenter dished to Connor Murphy in the slot. Murphy’s shot was turned away by Rask but Carpenter crashed the net to bang home the loose puck for a 1-0 Blackhawks lead at 18:14. The goal was Carpenter’s third career short-handed goal, and his first goal of the season. Chicago is 10-2-3 when scoring first, Boston was 7-1-3 when allowing the first goal. 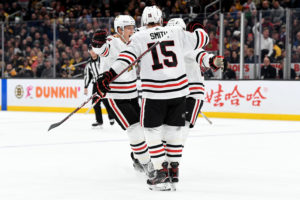 Dec 5th 2019; The Chicago Blackhawks celebrate a goal by center Ryan Carpenter (22) against the Boston Bruins during a NHL game at the TD Garden. (Credit: Brian Fluharty)

Pastrnak was called for Interference at 18:41, giving the Hawks their first power play of the evening. The Chicago man advantage ranks near the bottom of the league but it only took ten seconds for them to capitalize on this one. Dylan Strome tipped an Erik Gustafsson shot from the blue line past Rask making it 2-0 Blackhawks. 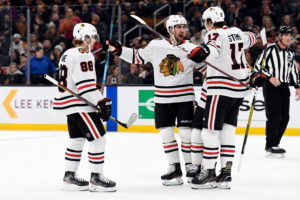 Dec 5th 2019; Chicago Blackhawks center Dylan Strome (17) celebrates with his teammates after scoring against the Boston Bruins during a NHL game at the TD Garden. (Credit: Brian Fluharty)

Despite the score the Bruins outshot the Hawks 10-6 for the period and won the face-off battle 12-8.

Once again Chicago gave the Bruins an early power play opportunity when the Hawks were called for Too Many Men on the Ice less than a minute into the second. The Bruins power play looked better than it had in the first but was still unable to solve Lehner.

Chicago’s Alex Nylander fired a pass from the top of the left circle to Jonathan Toews at the bottom of the right circle. Rask made a toe save on Toews one-timer.

The Bruins second line again had pressure in the Chicago zone. Their best chance was a shot tipped wide of the Hawks goal.

sloppy defense in the corner and behind the Bruins net by Zdeno Chara and McAvoy led to a Kane scoring opportunity that Rask stymied.

Nylander was whistled for High-Sticking on McAvoy at 10:35. The Bruins were unable to muster much pressure being a man up.

At 12:58 Pastrnak was called for Roughing after a tussle with defenseman Slater Koekkoek behind the play. Kane sent a cross ice pass to Alex Debrincat for a one-timer that Rask stopped. The Bruins successfully killed off the Pastrnak penalty but the Hawks were flying to close out the second period. 18-year-old Kirby Dach had a shot hit the post during a stretch where Boston was unable to clear the puck from their zone.

Chicago outshot Boston 12-10 for the period.

DeBrincat struck for Chicago just seventeen seconds into the third when a quick breakout by Calvin de Haan connected with Strome, who dished off to DeBrincat at the red line. DeBrincat burst into the Bruins zone and snapped a rocket past Rask blocker side high. The third-year forward’s sixth goal made it 3-0 Blackhawks with 19:43 to go. 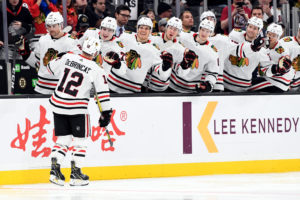 The Bruins, as they have been known to do this year, turned it on in the third. At 1:49 David Backes fired a shot from the right of Lehner that the Swede saved but the rebound out front went right to countryman Joakim Nordstrom who wristed the puck past three Hawks defenders and Lehner making it 3-1.

The Bruins were keeping Lehner on his toes throughout the period, 18 total shots, as Pastrnak had a shot saved. Nordstrom had another point blank bid stopped.

At 11:46 Chicago’s Zack Smith hit Pastrnak, as he was passing the puck along the boards. Pastrnak has become a bit of a target due to his scoring prowess this season. Defenseman John Moore took exception to Smith’s hit and dropped the gloves. Tonight was Moore’s first game of the season after recovering from shoulder surgery. Smith floored Moore with one punch. Moore would head right for the tunnel but would return later in the game. 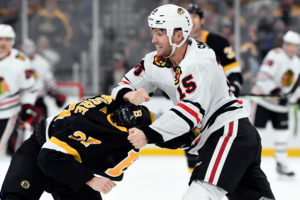 Charlie Coyle was called for Roughing at 13:40. With Chicago threatening in the Boston zone, Kane whiffed on a shot attempt. Grzelcyk topped away the puck to Sean Kuraly who head-manned to Chris Wagner in the neutral zone. Gufstafsson was the lone defender back for the Hawks and he fell as he started to skate backwards, Wagner was in alone on Lehner and fired a wrist shot glove side cutting the lead to 3-2 at 15:01. The shorthanded goal was Wagner’s second goal of the season. 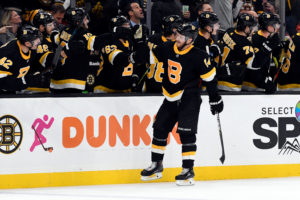 By now TD Garden was buzzing because the Bruins have pulled off this come from behind act numerous times this season.

Boston was pressing the Hawks in their zone with roughly two minutes remaining in the game. Torey Krug pinched down the right wall to keep the puck in the Hawks zone. Pastrnak had the puck and looked to pass to DeBrusk. Pastrnak was hit by Gilbert, who took himself out of the play by trying to get a little extra in on Pastrnak thus not being in position to stop DeBrusk from passing to Krug. Krug wristed a shot up over the shoulder of Lehner tying the game at 3-3. Krug’s fourth goal of the season came at 17:27. 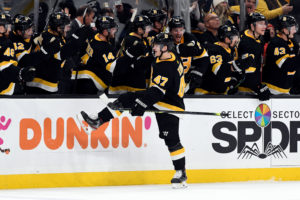 After three periods the Bruins were outshooting the Blackhawks 40-30.

Pastrnak carried the puck into the Hawks zone and was tripped by Toews, but the officials put the whistles away for overtime. Toews stole the puck and was off to the races in alone on Rask. Toews deked left, went right and slid the backhander between Rask’s pads giving the Hawks the extra point. Toews goal in OT brings the Hawks to 3-2 in the five minute session, while the Bruins are 2-2.

“That’s one of those judgement calls, make it quick, they didn’t make it,” said Bruce Cassidy about the Toews non-call in overtime. “It worked against us.”

the Blackhawks travel to New Jersey to face the Devils on Friday at 7:00 pm EST at the Prudential center in Newark. The Bruins will host the Colorado Avalanche on Saturday night at TD Garden, puck drop is at 7:00 pm EST as well.