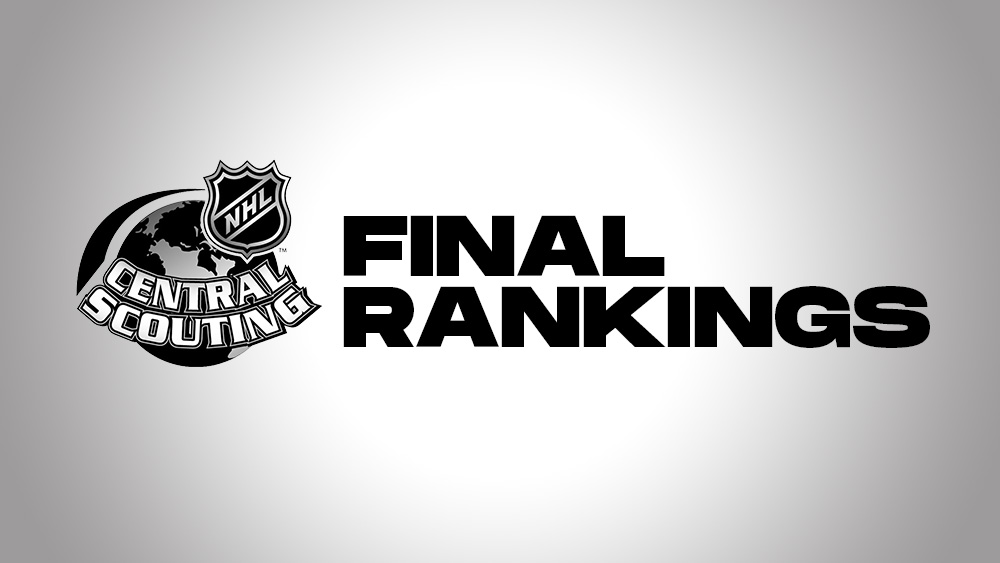 NEW YORK (April 8, 2020) – Left wing Alexis Lafreniere of the Rimouski Oceanic ranks No. 1 among North American skaters for the 2020 NHL Draft, followed by a pair of his Team Canada gold medal-winning teammates from the 2020 World Junior Championship: No. 2 Quinton Byfield of the Sudbury Wolves and No. 3 Jamie Drysdale of the Erie Otters. Tim Stuetzle, a left wing for Mannheim in Germany’s top professional league, ranked as the top international skater as the NHL Central Scouting Bureau today released its final rankings.

Lafreniere (Saint-Eustache, Que.) led all QMJHL skaters with 35-77—112 in 52 GP in 2019-20 and was a standout at the 2020 World Junior Championship where he was named Most Valuable Player and Best Forward after averaging two points per game for Team Canada (4-6—10 in 5 GP) to help his country capture the gold medal.

If selected first overall, Lafreniere would become the first Quebec-born player taken No. 1 since Marc-Andre Fleury in 2003 and the first skater from his province taken first in the Draft since Vincent Lecavalier in 1998. 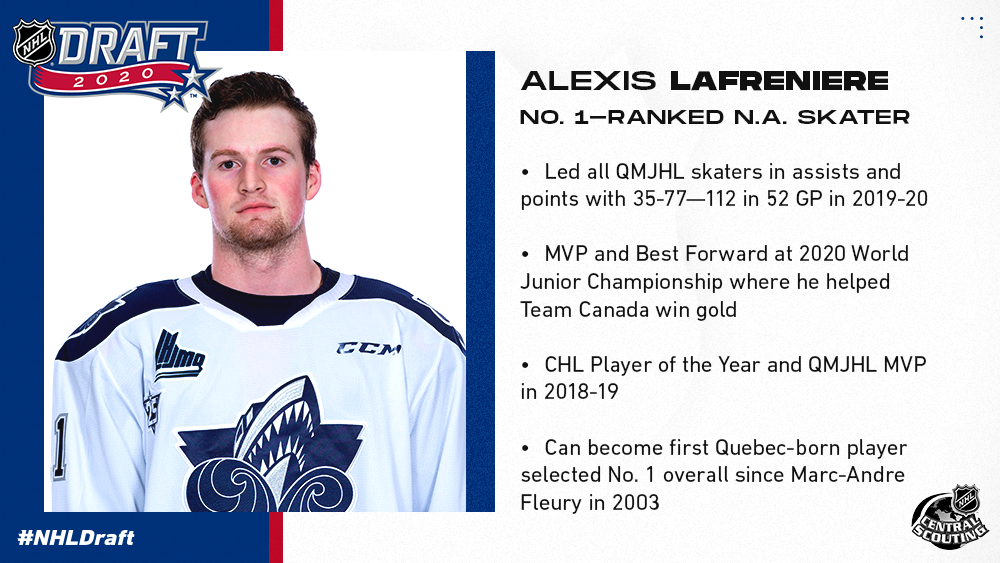 “Lafreniere has exceptional skills and attributes which make him a scoring threat every time he steps onto the ice,” said NHL Director of Central Scouting Dan Marr. “Whether it’s with Rimouski in the QMJHL or on the world stage he has continually shown that he is a force that can impact and be a difference maker in games. What sets him above in this Draft class is the natural compete and battle traits that are ingrained in his game, allowing Alexis to lead the way and make others around him better.”

Joining Lafreniere atop the rankings for North American skaters are a pair of his Team Canada World Junior gold medal-winning teammates, including No. 2 Quinton Byfield (Newmarket, Ont.), a center for the Sudbury Wolves (OHL). Byfield recorded 32-50—82 in 45 GP in 2019-20 where his 1.82 P/GP ranked tied for fifth among all OHL skaters. 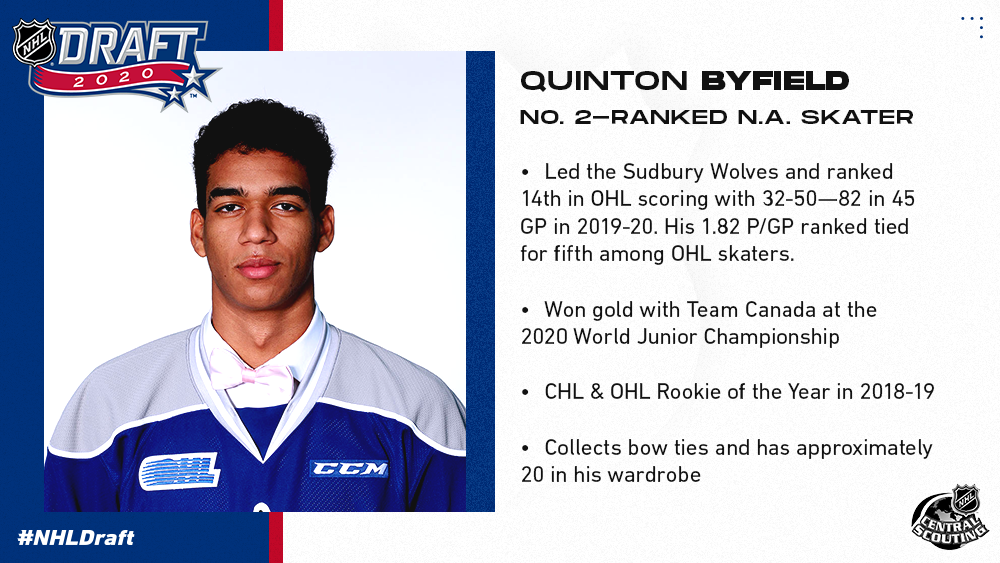 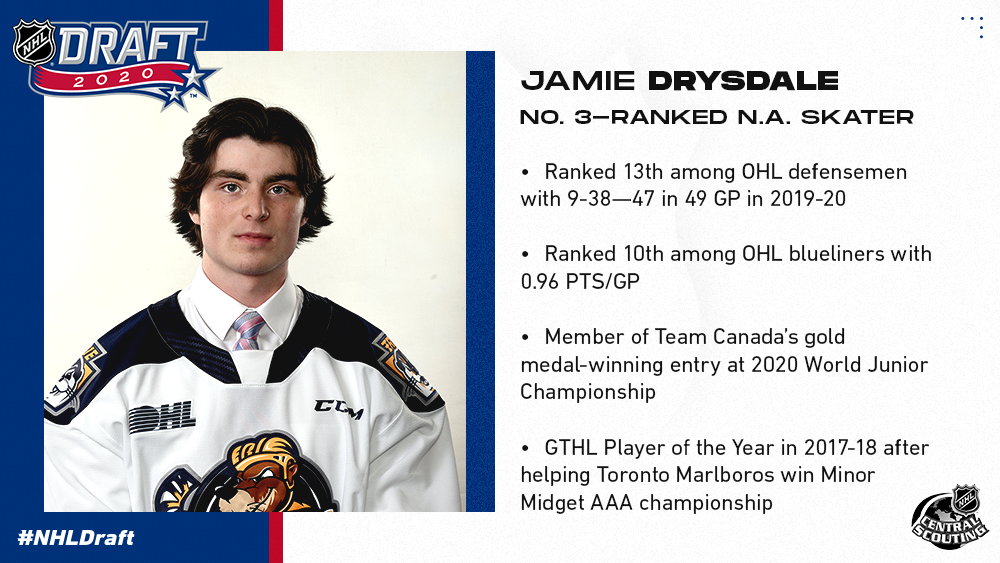 Rounding out the top five are defenseman Jake Sanderson (Whitefish, Mont.) of the USA Hockey National Team Development Program’s Under-18 Team and the son of former NHL player Geoff Sanderson, as well as center Cole Perfetti (Whitby, Ont.) of the Saginaw Spirit (OHL) who racked up 37-74—111 in 61 GP this season. 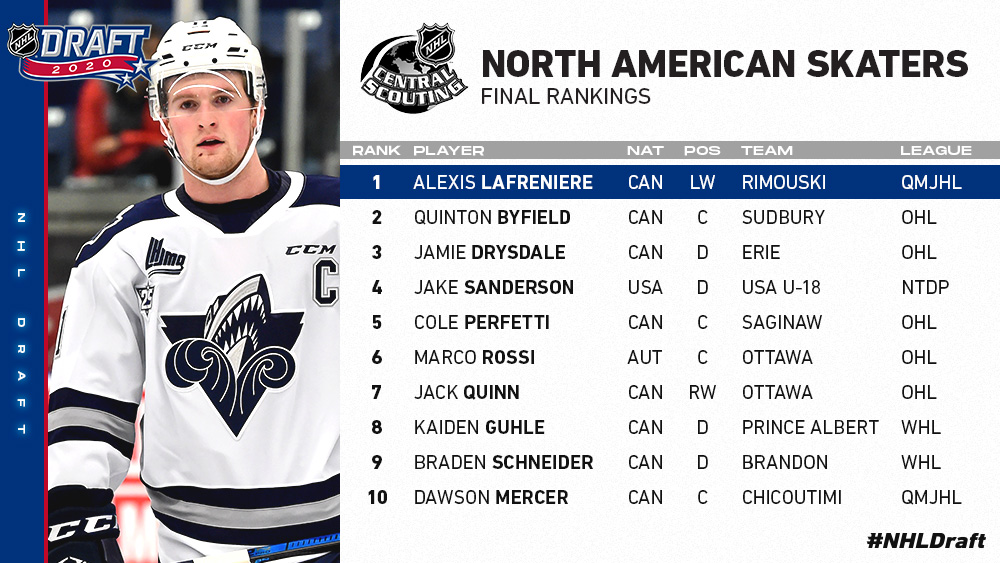 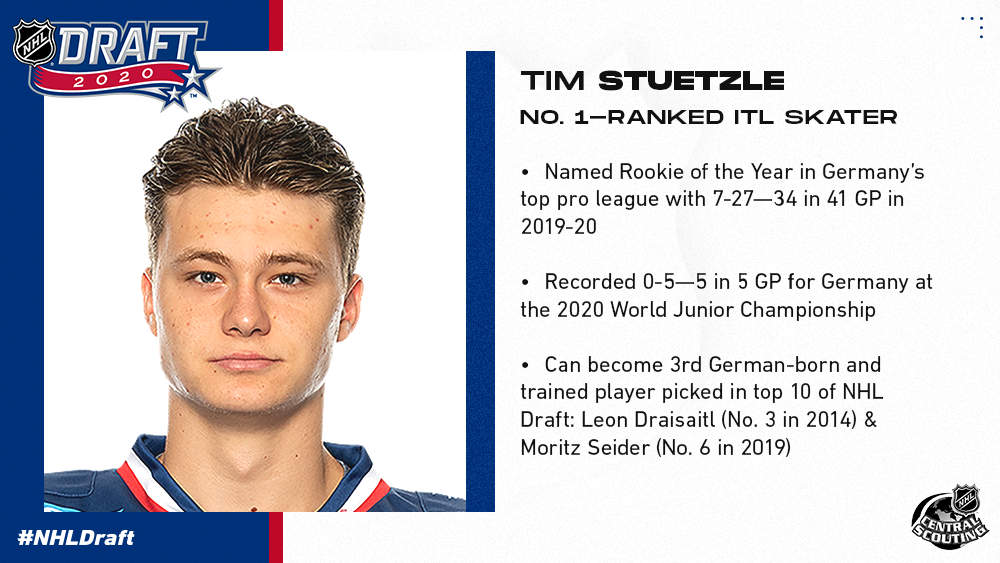 “Stuetzle is a smart, creative, playmaking forward,” said Goran Stubb, Director of NHL Central Scouting’s European Services. “He has an exceptional combination of skating and puck skills that are at an elite level and he’s capable of making precision plays at top speed with a wicked finishing shot.”

Joining Stuetzle among the top-five ranked international skaters are four players who have spent the majority of 2019-20 in their country’s top professional league: No. 2 Alexander Holtz (Stockholm, Sweden), a right wing for Djurgarden (SWEDEN), No. 3 Anton Lundell (Espoo, Finland), a center for HIFK (FINLAND), No. 4 Lucas Raymond (Gothenburg, Sweden), a left wing for Frolunda (SWEDEN) and No. 5 Rodion Amirov (Salavat, Russia), a left wing for UFA (RUSSIA). 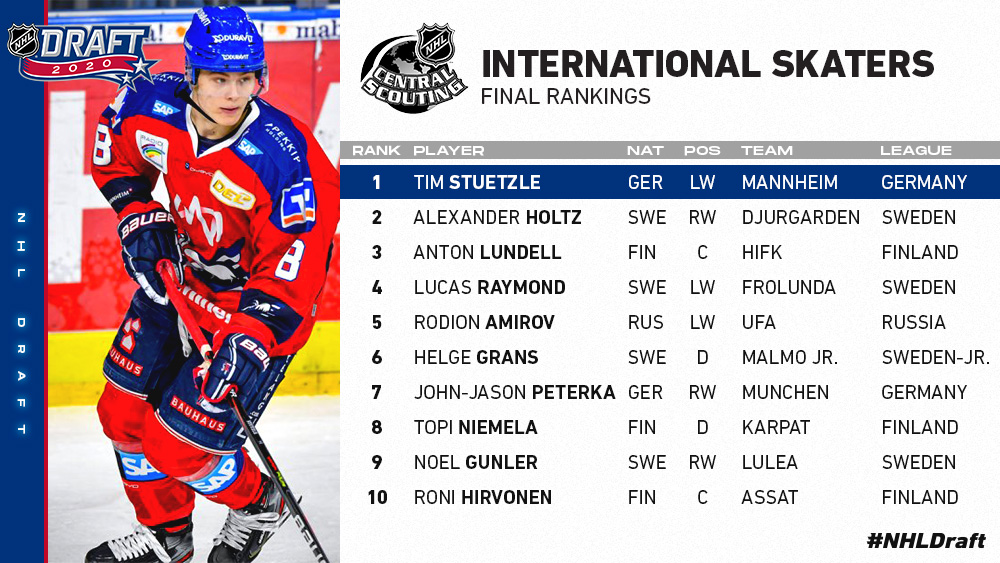 In its 45th year of operation, NHL Central Scouting provides evaluation and scouting of draft-eligible players to NHL member clubs. Headed by Director of Central Scouting Dan Marr, NHL Central Scouting employs seven full-time and 14 part-time scouts throughout North America. To report on prospects playing internationally, the NHL employs the services of Goran Stubb and his staff at European Scouting Services based in Finland.

The 2020 NHL Draft, which was originally scheduled for June 26-27 in Montreal, has been postponed due to the ongoing uncertainty resulting from the coronavirus. The location, timing and format of the 2020 NHL Draft (and Draft Lottery) will be announced when details are finalized.