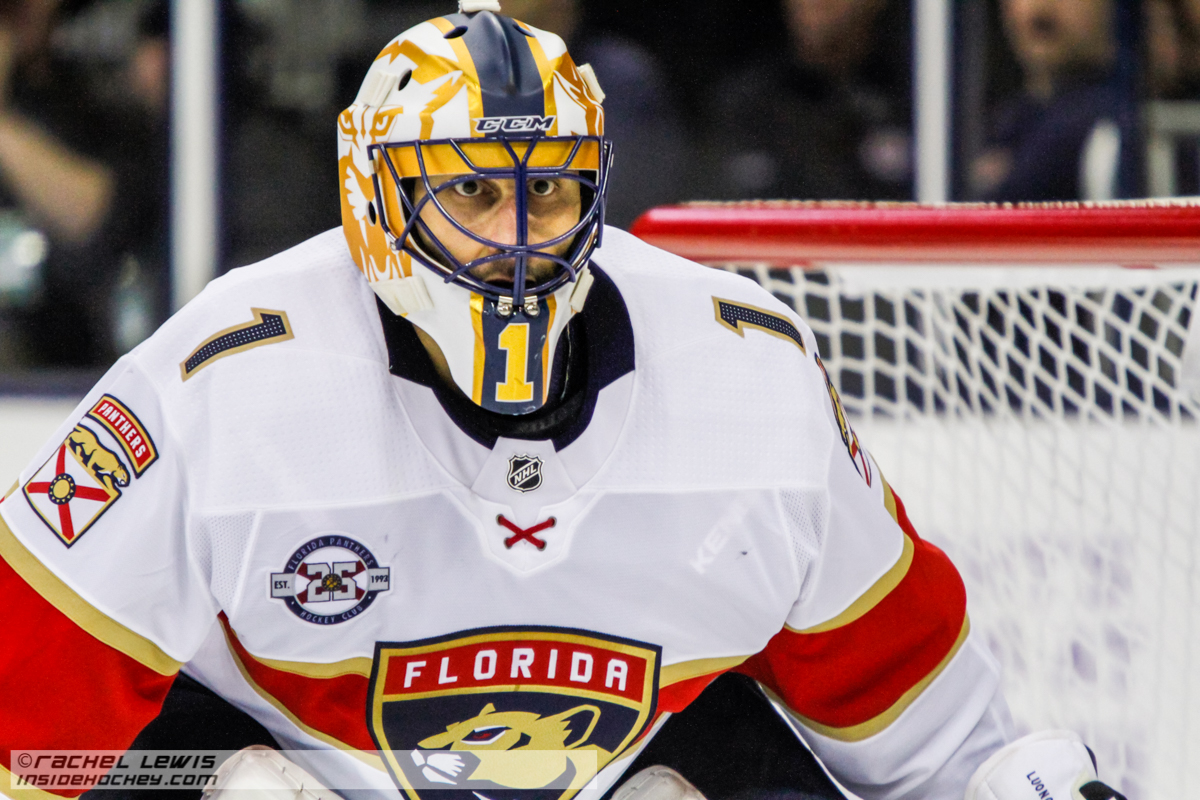 Roberto Luongo (FLA - 1) keeps an eye on the play.

Goaltender Roberto Luongo announced his retirement Wednesday, ending his 19-season NHL career with the second-most regular-season games played (1,044) among goaltenders and the third-most regular-season wins (489) in NHL history. He also retires among the top 10 in regular season saves (2nd; 28,409), shutouts (9th; 77) and save percentage (t-9th; .919).

* Luongo retires as the franchise leader in wins for both the Canucks (252) and Panthers (230) – the only goaltender in NHL history to hold the wins record for multiple clubs (min. 100 wins for each).

* Luongo also holds the franchise record in shutouts for the Panthers (38) and Canucks (38), making him one of three goaltenders in NHL history to lead multiple franchises in that category. Marc-Andre Fleury is the shutouts leader for the Pittsburgh Penguins (44) and Vegas Golden Knights (12), while Roy Worters set club records while playing with the now-defunct New York Americans (45) and Pittsburgh Pirates (22).

^Fleury and Worters also lead those franchises in wins, but do not meet the 100 wins threshold noted above

* On the international stage, Luongo captured a championship with Team Canada on five occasions: two gold medals at the Olympics (2010, 2014), two golds at the World Championship (2003, 2004) and a World Cup of Hockey title (2004). Luongo allowed two or fewer goals in four of five appearances at the 2010 Olympics in Vancouver, highlighted by a 34-save performance in the gold-medal game against the United States.

* Luongo won the William M. Jennings Trophy in 2010-11 alongside teammate Cory Schneider. In 2006-07, Luongo was a finalist for both the Hart Trophy and Vezina Trophy, finishing second in voting behind Hart winner Sidney Crosby and Vezina winner Brodeur. Luongo also was a top-three vote-getter for the Vezina in 2010-11 (w/ VAN) and in 2003-04 (w/ FLA).

Roberto Luongo went fourth overall to the Islanders in the 1997 NHL Draft – behind Joe Thornton (BOS), Patrick Marleau (SJS) and Olli Jokinen (LAK) – and currently is one of six goaltenders ever selected among the top four.

* After being drafted by the Islanders, Luongo won back-to-back Quebec Major Junior Hockey League championships – first with the Val-d’Or Foreurs (1997-98) and then with the Acadie-Bathurst Titan (1998-99).

* At age 20 on Nov. 28, 1999, Luongo made his NHL debut at the FleetCenter in Boston, making 43 saves in a 2-1 victory against the Bruins – with Islanders teammate Zdeno Chara scoring his first career game-winning goal. Luongo’s 43 saves are tied for the third-most by a goaltender winning his NHL debut.

* Less than a month after his first victory, Luongo recorded his first NHL shutout on Dec. 27, 1999 – stopping all 34 shots he faced to record another milestone against Boston. Skating with the Panthers nearly 19 years after that, on Dec. 4, 2018, Luongo again blanked the Bruins for the 77th and final shutout of his NHL career.

* Luongo’s last shutout came in his return from a five-game absence and propelled him ahead of Ed Belfour and Tony Esposito into sole possession of ninth place on the NHL’s all-time regular-season shutouts list.

* Luongo earned his last victory with the Islanders on April 9, 2000 against the Panthers – a team that acquired him less than three months later at the 2000 NHL Draft in Calgary. That deal sent Luongo – along with Jokinen (the No. 3 pick in 1997) – from New York to Florida in exchange for forwards Mark Parrish and Oleg Kvasha.

* With a fresh start for a relatively new franchise – the Panthers had been in the NHL just seven seasons before Luongo’s arrival – the netminder quickly became the franchise leader in shutouts, games played by a goaltender and wins. Luongo passed John Vanbiesbrouck in each of those categories before the end of the 2005-06 season – first claiming the shutouts distinction on Feb. 6, 2003, followed by games played on Dec 7, 2005 and wins on April 13, 2006. Though he departed for eight seasons, Luongo never relinquished any of those franchise records.

* On June 23, 2006, Luongo was traded to Vancouver in a five-player deal that sent Todd Bertuzzi to Florida. Entering the 2006-07 season with 341 NHL games to his credit, Luongo posted career highs in games played (76) and wins (47) to lead the Canucks to a first-place finish in the Northwest Division – one of their six division titles in the Luongo era.

* Luongo reached the 30-win mark in each of his first six seasons with the Canucks (part of a seven-season streak overall) and helped Vancouver post the League’s best regular-season record in 2010-11 and 2011-12 – the only times the club has won the Presidents’ Trophy.

* In the playoffs, Luongo backstopped the Canucks past the first round in each of their four appearances from 2006-07 to 2010-11, culminating in a trip to the 2011 Stanley Cup Final against the Bruins.

* In Game 7 of the 2011 Conference Quarterfinals, Luongo posted a 31-save effort as he and the Canucks won 2-1 in overtime against the defending champion Chicago Blackhawks – a club that had eliminated them in each of the previous two years. He posted a 1.97 goals-against average and .932 save percentage over the next two rounds to defeat the Nashville Predators and San Jose Sharks, guiding Vancouver to the Final for the first time in 17 years. Luongo recorded two shutouts in the 2011 Final, but he and the Canucks ultimately lost Game 7 on home ice.

* Over the final 255 games of his NHL career, Luongo added to his franchise records and helped the Panthers return to the playoffs in 2015-16 as the No. 1 seed in the Atlantic Division. Celebrating his 37th birthday just days before the end of that season, Luongo posted the sixth and final 35-win campaign of his career to help Florida clinch its second division title.

* Luongo won three of his last four career games, posting his final victory on April 1, 2019 at home against the defending Stanley Cup champion Capitals. His last NHL appearance was a 4-3 overtime loss against the Devils, at home on the final day of 2018-19 when Panthers captain Aleksander Barkov set the franchise record for points in a single season.

A leader in every regard, Roberto Luongo retires as the last goaltender to captain an NHL team. He wore the ‘C’ on his mask for the Canucks from 2008-09 to 2009-10, at the time making him the first netminder in 60 years to serve as captain of an NHL team – Bill Durnan was the last before him in 1947-48 with the Montreal Canadiens.

* Luongo’s leadership in the community also was brought to the forefront when he addressed the crowd at BB&T Center before a win on Feb. 22, 2018. A longtime resident of Parkland, Fla., Luongo delivered an emotional speech as the Panthers honored victims of the shooting at Marjory Stoneman Douglas High School. Speaking for nearly three minutes, he expressed his love for the Parkland community, called for positive action in the wake of tragedy, addressed family and friends of the victims and commended the efforts of teachers and students.

* Through his welcoming personality and lighthearted take on life in the NHL, Luongo was respected by teammates and opponents alike. After announcing his retirement in true @strombone1 style, Roberto Luongo received messages from former teammates and opposing players, including Martin Brodeur, with whom he won a gold medal at the 2010 Olympics.

* Luongo also received a congratulatory message from Rangers goaltender Henrik Lundqvist, who now has the most career regular-season wins among active goaltenders (449).