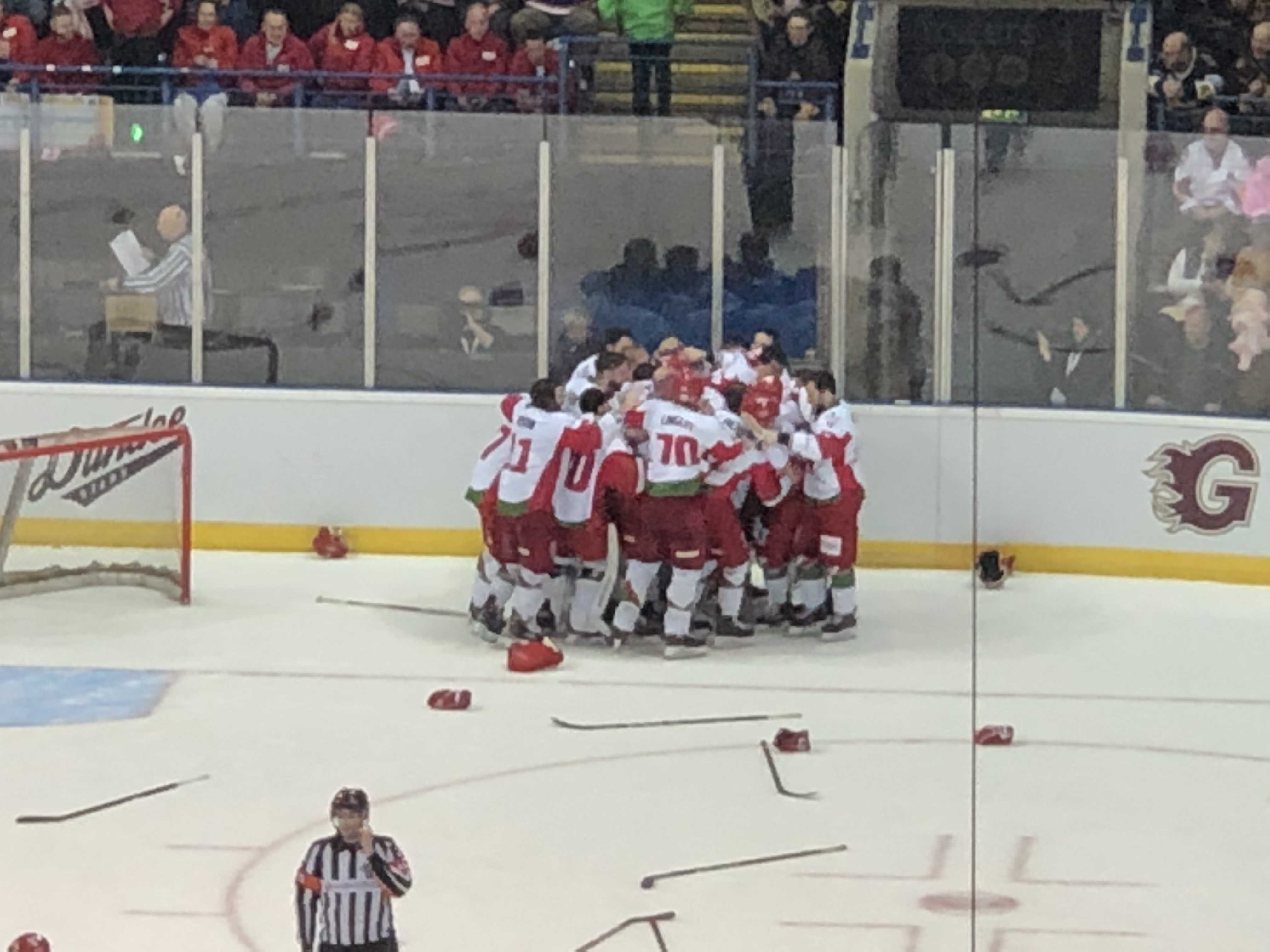 The English Elite Ice Hockey League championship game began precisely at 4pm Nottingham time on Sunday, with the national anthem of Wales. And not “God Save the Queen” for the Northern Ireland team.What? A hockey insider I talked to said that the Giants never play an anthem, even in their own building. It was the Cardiff Devils versus the Belfast Giants, in case you haven’t been following my  whole weekend’s odyssey of stories.

The action was much more vigorous than any time prior in the weekend. Big hits were thrown on each side, including one that appeared to concuss a Giants player. He was helped off the ice. There were penalties called, as well, a rarity earlier in the weekend. At one point, Cardiff enjoyed a two-man advantage. Didn’t get the puck to the net.

The Giants had a four-on-three and didn’t score, though they were better than Cardiff had been on their power play.

The only first-period goal came from Mike Hedden of the Devils. Off a broken play, he rushed the one with one man back. He shot high, off the body of the goaltender, and in. The shots in the frame were 12 for the Giants to six for the Devils.

Period two began after a mascot dance-off, about the most North American element of the off-ice game presentation I’ve noted during the weekend.

The actual game resumed after the players and officials skated around waiting for the overstuffed men in uniform to get finished with their boogie. When they did, the period was all Ben Bowns, the Cardiff goaltender. He made at least five spectacular saves. The first was on a delayed penalty in the first minute. The second was on a two-on-one off a broken play. Patrick Dwyer jumped in on net. Glove save. The third was a backhand to the net by Jonathan Ferland, which got under Bowns and rolled back towards the goal line. He reached under him and pulled in into his pants about three inches from the goal line. This was right below my bird’s-eye view.

The fourth amazing stop was on Dwyer again. He got a puck across the zone on the right side and shot directly toward the open side of the net. Bowns somehow got over there with his trapping glove. Number five came off Paul Swindlehurst, in close. Bowns made a shoulder save.

They don’t do three stars over here. It’s “Man of the Match,” one given to each side. Bowns, were this win to hold up, would win. Only it would have to be renamed “Superman of the Match.”

The Devils took a penalty for interference close to the end of the period. It would carry over into the third. The shots through two frames were 22 Giants, 11 Devils. The score, as was said, was 1-0. Cardiff was anxious to avenge losing the season’s championship on a tie-breaker to the Giants. They would have to limit the chances of their Northern Irish opponents if that were to happen.

Period three started with an early power play by the Giants. Then one for the Devils. Nobody had any great chances, though the Belfast goalie had some trouble with one shot. But it all came undone for Cardiff at regular strength. A soft wrister from the point by Kevin Raine got all the way through. 10:04 was left. The score was tied.

In general this year, Belfast has been better in period three, according to my BBC colleague Phil Marsh. Cardiff wasn’t quitting. A flip from the point was redirected by James Livingston and hit the post.

Then it happened. The brilliant Cardiff defenseman, Gleason Fournier, was fed a puck as he skated over the blue line. He deked and slid it through the netminder’s legs to put the Devils in the lead again at the 12:27 mark. (Who is this guy? 90th overall pick, by Detroit. Wound up playing most of his career in the ECHL. Someone needs to give him another look.)

Bowns made another great save with 5:36 left, knocking the puck down and then having it sit in front of him in a crowd.

Cardiff attacked. Belfast attacked. It went like that as the clock wound down. The Belfast goalie took a seat with about two minutes to go. The team took a timeout with about a minute left. The Devils then iced the puck with 37.8 left, and they took time. Nothing doing for Belfast. The team that had won it all to date this year (league table, which is to say, standings, and Challenge Cup) couldn’t complete their grand slam.

The Man of the Match for Cardiff was indeed their netminder, Bowns. The one for Belfast was Raine. Cardiff, meanwhile, avenged a tie-breaker loss in the league standings with the win. The shots came out 35-22 in Belfast’s favor, another reason for Bowns being honored after the game.

The Belfast team was saluted, and they saluted their fans. They left the ice. The Wales team got medals, with hats given out at the same time, and then the trophy.

As you do, the Devils skated the trophy. They celebrated it with the families. They saluted their supporters. They  had won. This was the second year  in a row.

And thus it was my time to depart, catching the 7:22 from Nottingham station. I hopped on to go back to Oxford via Birmingham, and watched the countryside stream past as the wheels rolled south. I knew, like I did when I covered the return of the Jets to Winnipeg in a very popular series of stories I called “Winnipeg Odyssey,” that this was probably a one-time thing. But I hope you enjoyed the journey, and maybe you’ll have the English Elite Ice Hockey League on your radar as time goes on.

At the very least, you should note that the British have qualified for this year’s IIHF World Championships. They’ll play, amongst other teams, Canada. They’ll probably lose 12-2, being realistic. But I’ll be just slightly torn in my loyalties as I follow the game. British hockey is a good product. It’s different from “our” hockey, but hey—it’s a world game now.

If there’s one thing I learned this weekend, it’s that the community of the game matters here more than it does in North America. Maybe it has to, because it’s so small, and mutual support is the only way forward.

Oh, and then there’s this: These British, they get hockey.