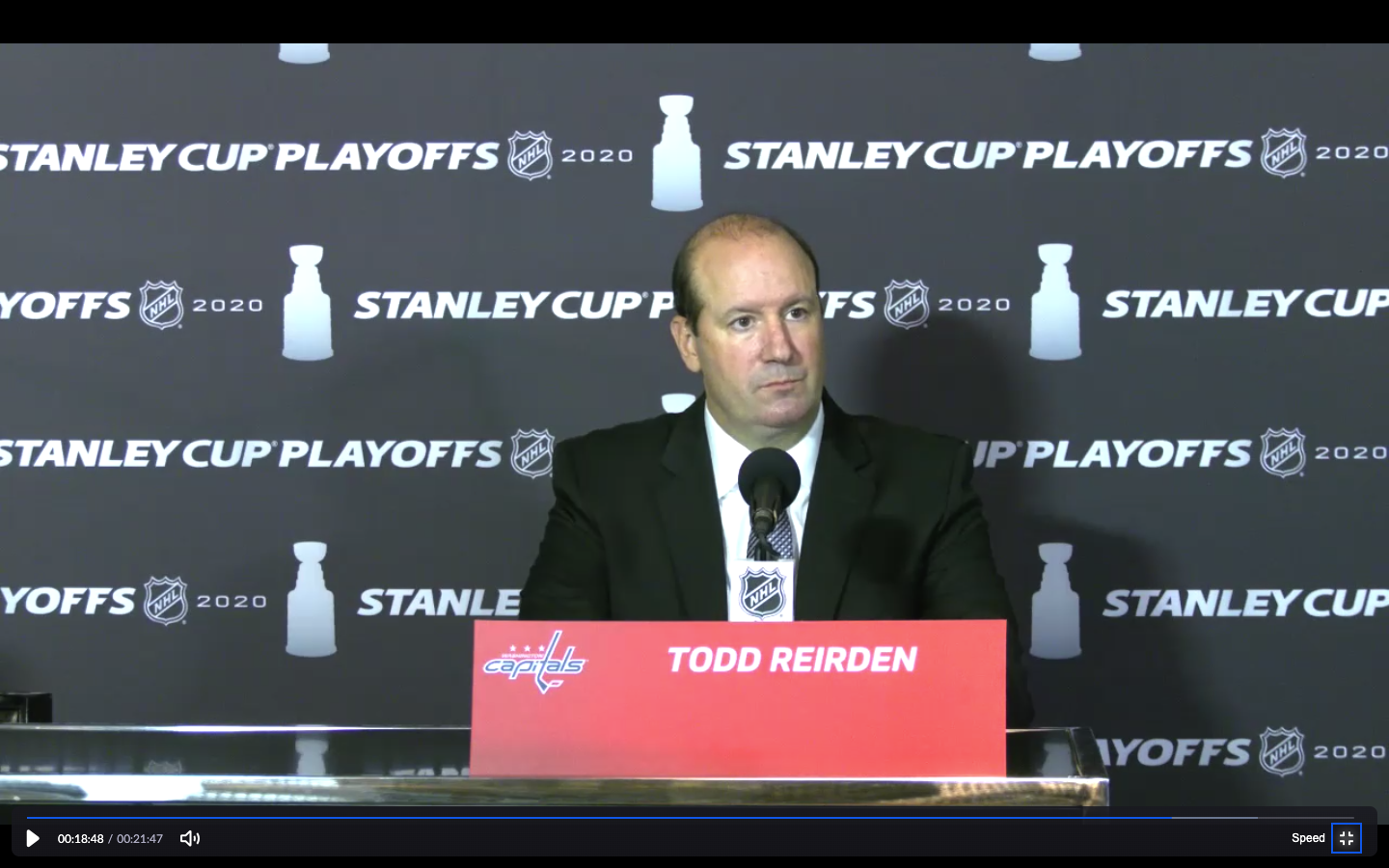 TORONTO--Todd Reirden speaks with the media following a 4-0 loss to the Islanders to eliminate the Capitals from the postseason on Aug. 20.

In June, 2018, when Barry Trotz departed the Capitals organization days after the franchise won their first Stanley Cup, Brian MacLellan’s job was to find a quality replacement. Ideally, it would be a candidate with some sort of experience in the playoffs and perhaps just as important, someone who could get the makeup of the room, riding high after tasting ultimate success following years of disappointment.

Todd Reirden, who served under Trotz since his arrival in Washington and had worked for four seasons prior in Pittsburgh, looked to be a good combo of both demands. Ready to assume his own bench after splitting his four years with the Caps as an assistant and associate coach, he knew the group that had overcome years of regular season excellence and early May exits. He saw the way you can push Alex Ovechkin but also leave the eight-time 50-goal scorer alone, a careful balance but vital prerequisite. And, he saw the fourth-winningest coach all-time manage to constantly stay upbeat despite no significant playoff success in 18 years. He was to be the protege for an underachieving team that finally figured it out.

But back-to-back first round exits including a five-game defeat to the Islanders in which they were outscored 17-8 and never seemed to capture any kind of momentum in the post-pause playoffs prompted MacLellan to again consult the organization’s future leadership.

“We have higher expectations for our team, and we felt a fresh approach in leadership was necessary,” MacLellan said in a statement on Sunday. “We would like to thank Todd for all of his hard work and efforts with our organization. Todd has been a big part of our team for more than half a decade, including our Stanley Cup run in 2018, and we wish him and his family all the best moving forward.”

The news comes days after the Caps fell 4-0 to the Isles in game 5 of their first round series and while Braden Holtby, an unrestricted free agent, acknowledged that might have been his last game with the club, Reirden said it’s not something he really spent much time thinking about.

“That’s part of the job,” he said when asked about his confidence level regarding job security. “It’s not something I go into everyday thinking about. I go into it with a plan of how to make our team better and improve our players and do it with passion, pride and work ethic. When you don’t come in on the winning end of it, it’s disappointing. You have to look at why that’s happening. I’m confident that I’m a young coach that continues to improve and continues to get better and has been able to find success in the regular season and haven’t been able to find it in two completely different circumstances in the playoffs.”

Reirden’s dismissal means the Caps will have to look at options behind the bench. Internally, Spencer Carbery has worked behind the bench for Washington’s AHL-affiliate in Hershey, coaching the club to a combined 80-43-15 record while assistant coach, Blaine Forsythe has been with the team since 2006-07 as a video coach turned assistant.

Some of the names on the free agent market though might be too tough to turn down for MacLellan and company. Gerard Gallant, Peter Laviolette and Mike Yeo among the more prominent names with recent NHL coaching jobs. Gallant’s success in guiding the expansion Golden Knights to a Cup Final meeting with the Caps in 2018 gave the organization a first-hand look at his abilities while Laviolette has guided each of his last three stops to a Final appearance including a Cup with Carolina in 2006.

The Caps offseason isn’t even a week in and the moves are beginning as the team tries to make good on what might be the final years of the Ovechkin and Nicklas Backstrom years in Washington.