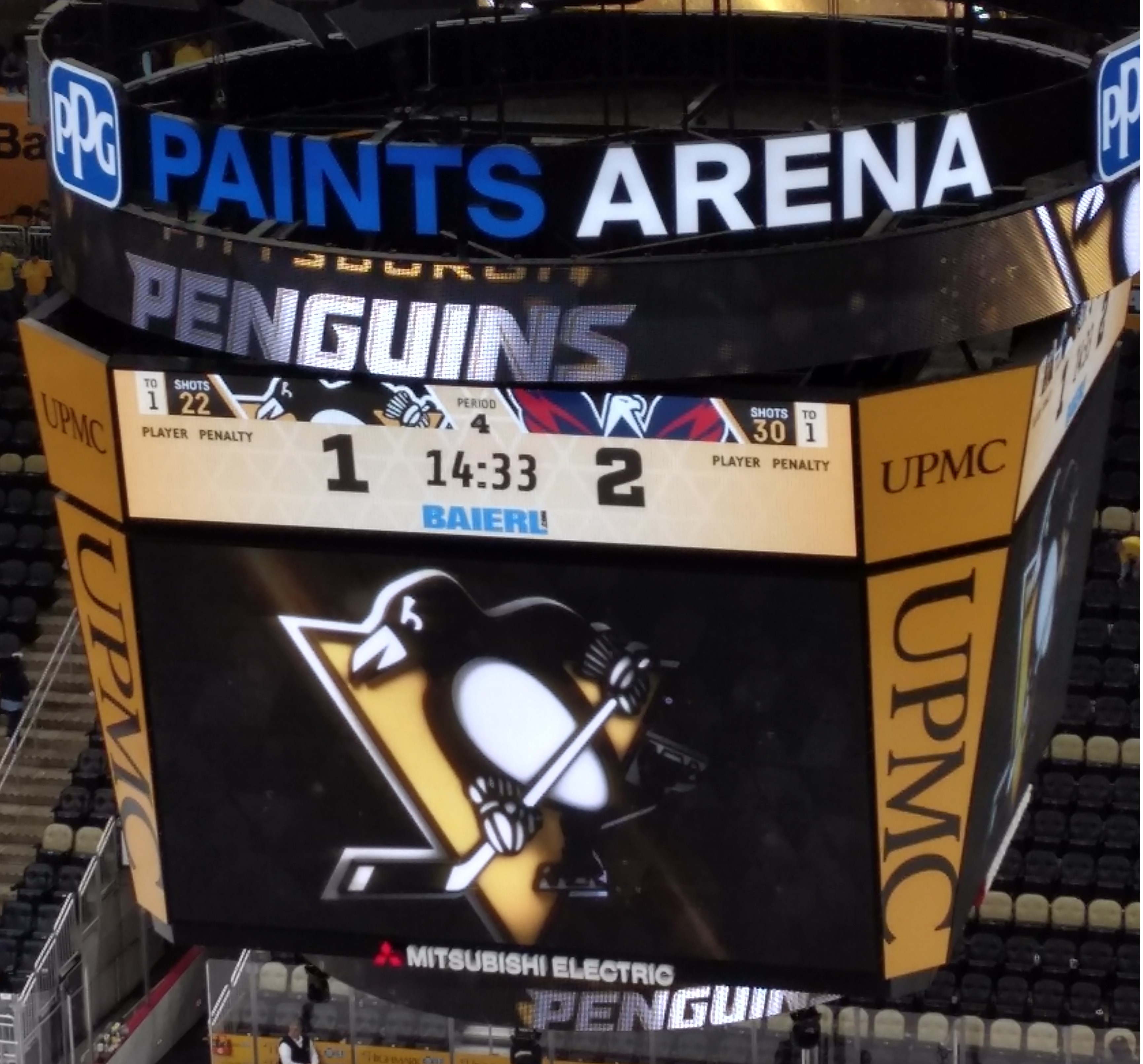 The Capitals had burned the Penguins on odd-man rushes early in their second-round series, but Pittsburgh had done a much better job of limiting those chances over the past two games.

And now, 5:27 into overtime of Game 6, here was Penguins defenseman Kris Letang making an ill-fated pass to captain Sidney Crosby, who couldn’t control the puck and turned it over to Capitals defenseman Dmitri Orlov. He passed it to Washington captain Alex Ovechkin, who sent it up ice to his team’s next most dangerous scorer, Evgeny Kuznetsov.

What was Ovechkin thinking as he watched Kuznetsov go in on the break against Pittsburgh netminder Matt Murray, with the chance to break a 24-year curse against the Penguins on his stick?

Kuznetsov did exactly that.

Murray slumped forward to the ice. Kuznetsov launched into his signature bird celebration. And the Capitals gathered to celebrate the first time they’ve knocked out the Penguins since 1994, and their first trip to the conference final since 1998.

Sidney Crosby turns it over, Alex Ovechkin sets up Evgeny Kuznetsov to send the Capitals to the Eastern Conference Final pic.twitter.com/8f2rKFsdK7

“Finally. It’s been too long,” Ovechkin continued, this time to Hockey Night in Canada. “Finally we beat Pittsburgh and finally we move to the next round. We didn’t go home; we’re not going to vacation. We’re still battling. We have to enjoy it, and we have to keep going.”

“It’s not a great feeling, obviously,” Crosby said. “It’s a close series, and the overtime could’ve went either way tonight. They got the big goal.”

The Penguins almost got the big goal just a couple of minutes before. At 2:54 of the overtime, winger Tom Kuhnhackl rang a shot off the post that was about an inch away from sending the series to a winner-take-all Game 7.

“I just shot it as quick as I could and tried to use the d’man as a screen,” Kuhnhackl said. “Just heard the reaction of the crowd and saw on the Jumbotron that it hit the post. Bitter disappointment. If that goes in, everyone’s happier now; we’re going back to Washington tomorrow.”

“In the back of my head, [I thought,] ‘Holy what?’ Your heart drops a little bit,” said Capitals head coach Barry Trotz. “When they hit the post there, I’m going, ‘We’ve got this.’ I just knew we had it.”

The Capitals kept the Penguins’ chances to a minimum all night long. Missing three of their top six forwards in Andre Burakovsky (injured in the first round), Tom Wilson (serving the last of a three-game suspension) and Nicklas Backstrom (injured in Game 5), their game plan focused on relentless checking that kept Pittsburgh to the outside and limited high-danger scoring opportunities.

The Penguins, who averaged an NHL best 15 slot shots per game during the regular season, were held to 5 in tonight's elimination game.
What a defensive effort by the Capitals who are off to the 3rd round.#ALLCAPS #3elieve pic.twitter.com/FJErUWZbwI

Washington showed patience through a first period that saw the playoff-tested Penguins looking surprisingly tentative in an elimination game. They’d gone 4-0 under head coach Mike Sullivan in those situations, and Murray had been lights out with a 3-0 record, 1.46 goals-against average and .934 save percentage.

“I thought both sides were pretty tentative; I definitely think we were,” Crosby said. “When you do that, you feel like you’re defending well, you’re in good position, but sometimes you’re not wearing other teams down. You’re not forcing them into mistakes. We did a pretty good job of that the prior couple games.”

The Capitals got the first goal of the game early in the second period, when winger Alex Chiasson snuck one past Murray on the short side and made PPG Paints Arena a pretty quiet building. It stayed that way until Letang, who earlier in the day took responsibility for mistakes that led to their Game 5 loss, got a little bit of redemption with a blast from the blue line at 11:52.

The Penguins, and the crowd, had life. But that was all the scoring either team would get in a tight, defensive contest without a lot of room on either side. Murray bailed his team out of a few defensive lapses in the third, with a particularly impressive sequence featuring big saves against Chiasson (11:28) and Jay Beagle (11:54).

On the Capitals’ 30th shot of the night, Kuznetsov finally broke through.

“We knew it was going to be a tight series,” Letang said. “They were waiting for mistakes, and they capitalized on most of them.”

“‘Empty,’ I guess, would be a good word,” Murray said. “They were just the better team; I thought they played a heck of a game tonight. It didn’t really feel like we had many chances at all. They deserved to win.”

In the other net was Braden Holtby, who started the playoffs on the bench when Trotz decided to reward backup Philipp Grubauer for his strong play down the stretch. When the Caps went down 2-0 in their first-round series with Columbus, Holtby reclaimed his net and has won eight of the 10 games he’s played, with a 2.04 goals-against average and .926 save percentage.

“Ever since we put him back in, he doesn’t want to give up the net anymore, and he’s been fantastic,” Trotz said. “I think you’re seeing another level of Braden, and with our team as well.”

Throughout their series with the Blue Jackets and Penguins, the Capitals showed the kind of resilience that’s been a hallmark of the team they eliminated Monday night.

“We’ve had some bad [experiences], some painful ones, and it’s made us stronger,” Trotz said. “I think toughness is more about, you get knocked down, how are you going to get back up again? And this group got up again.

“Some of the pain and suffering of the past made them stronger and more resilient and more determined and more committed and more focused. We beat the Pittsburgh Penguins, and they’re a hell of a hockey team. It’s a good feeling; there’s a lot of skeletons in the closet.”

Even in defeat, the Penguins remained proud of what they’ve accomplished.

“We battled right till the end,” Murray said. “We left it all on the ice, and that’s all we can do. This group is so resilient; we showed that right till the very end. Nothing but pride in here.”

“Our group worked hard every game,” Evgeni Malkin said. “Last two years we played unbelievable. Three years is so hard; maybe a little tired, too. It’s a sad day, but we look forward. Work hard and we’ll be back next year, be better next year.”

Sullivan, now 9-1 in playoff series with the Penguins, has often praised his players for their resilience and stick-to-it-iveness. Minutes after their loss, he took a moment to do that once more.

“I think sometimes we all learn more from our failures than we do from our successes,” he said. “I think this group knows how hard it is to win in the playoffs. All the teams are really good, and there’s a fine line between winning and losing.

“We haven’t tasted this in a long time, and that’s a credit to the group of players that are in that dressing room, because they’ve been a hungry group and they’ve accomplished so much. I couldn’t be more proud of them, as their coach, because of that.”