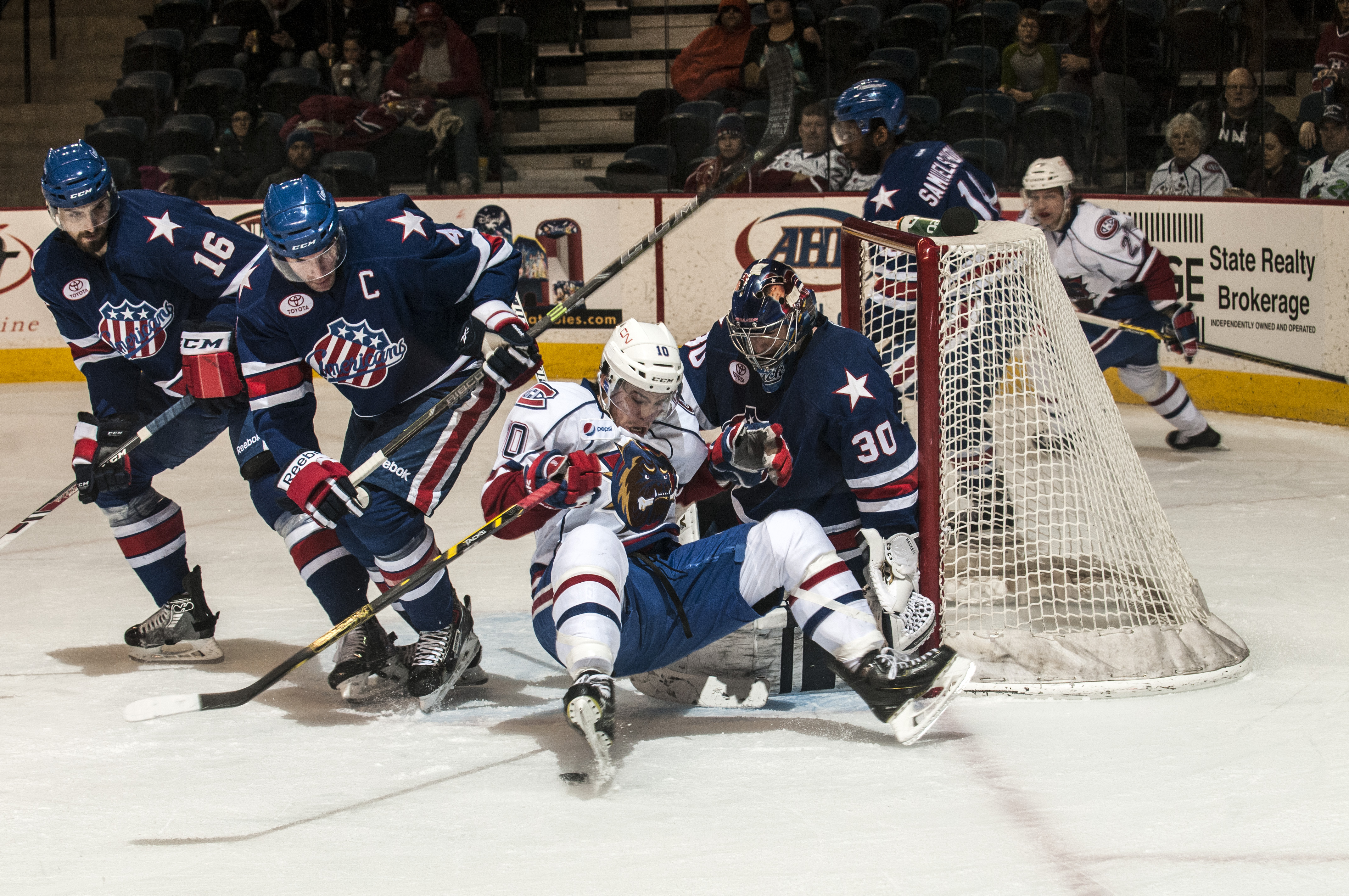 This is the eighth of ten contests between these two divisional rivals. Hamilton leads the season series 5-2-1-0. Both clubs came into the contest on a four-game point streak.

The Bulldogs had jump to their game in the first few minutes, spending the majority of it in the offensive zone. Daniel Carr, Sven Andrighetto and Charles Hudon had a strong first few shifts of the game. Their resilient fore-check hemmed Rochester in their own zone. The Bulldogs were winning puck battles along the boards and not allowing Rochester to gain posession

The best chance of the period for the Americans was at 7:55, when a shot went right through a sprawling Joey MacDonald and hit the post. Davis Drewiske was there to clear the puck out of harms way and keep the score 0-0. Hamilton led the period 15-11 in shots after 20 minutes.

Five minutes into the second period, a drop pass from Michael Bournival, in his second game back from a stint with the Montreal Canadiens, found Christian Thomas in the slot. Thomas sent a pass to Gabriel Dumont who was standing on the doorstep, but couldn’t get it past Hackett and the score remained 0-0.

At 12:25, a pass from Eric Tangradi found T.J. Hensick streaking in on goal. The pass went off Hensick’s foot and the Bulldogs appeared to have scored. The referees determined a kicking motion propelled the puck in the net and the goal was called off.

Christian Thomas had Hamilton’s only penalty of the period, sitting for two minutes for hooking at 13:58. The ‘Dogs did a good job of keeping Rochester to the outside and only allowed one shot to get through to MacDonald.

Just as Thomas’s minor was over, Rochester’s Justin Kea had to sit in the sin bin for interference. Hamilton was having a tough time with their zone entrances, with two shots going up into the mesh and the faceoffs went outside of the attacking zone. The ‘Dogs weren’t able to capitalize on the man-advantage.

The first goal of the game was a cross-ice feed that found Evan Rankin who tipped in a shot that trickled in behind MacDonald giving Rochester the lead at 1:42 of the third period.

With a Hamilton penalty pending Rochester had an extra attacker on the ice. A shot from Kevin Sundher from the blue line bounced off of MacDonald right to a wide-open Chad Ruhwedel who made no mistake in capitalizing on the wide-open cage putting Rochester up 2-1.

Even with the extra attacker on the ice and MacDonald on the bench for Hamilton, they couldn’t find the equalizer. Rochester’s Justin Mercier sealed the victory by scoring an empty net goal from the slot.

Hamilton looks to bounce back Saturday night at FirstOntario Centre against the Utica Comets. Saturday’s contest is the last home game for Hamilton in March as they head on an eight-game road trip. Puck drop is 7 p.m.