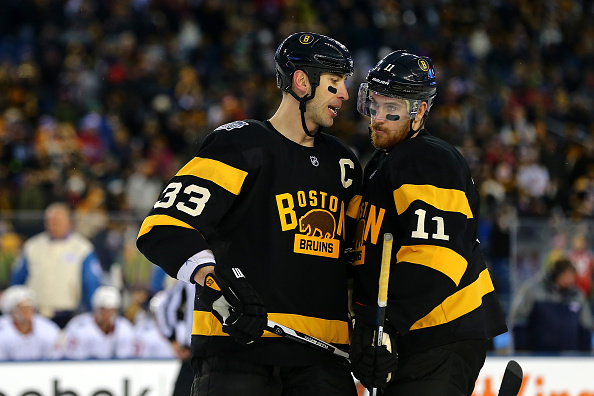 FOXBORO, MA - JANUARY 01: Zdeno Chara #33 and Jimmy Hayes #11 of the Boston Bruins speak in the third period against the Montreal Canadiens during the 2016 Bridgestone NHL Winter Classic at Gillette Stadium on January 1, 2016 in Foxboro, Massachusetts. (Photo by Maddie Meyer/Getty Images)

B’s Need to Look Ahead After Humiliating Winter Classic Loss

This was it. This was supposed to be the day that we have been anticipating up until this point in the 2015-16 National Hockey League season. The 2016 Bridgestone NHL Winter Classic had come back to Boston.

When the league announced almost one year ago to the date that the game would return outdoors to the Boston area, the excitement was boiling over amongst the locals…although the weather conditions for this one seemed reminiscent of boiling/warm conditions compared to last winter.

The trek down to Gillette Stadium in Foxborough, MA instead of the unreliable T ride into Fenway Park only added to the mystique of the affair. Media from all over North America were present for this one as this was the highlight of any New Year’s Day if you are a hockey fan.

With such a buildup to this contest and trying to ignore all of the hoopla that accessorized this “Original Six” matchup, this was still just a regular-season game.

Don’t tell that to the teams involved in this one.

The Boston Bruins and the Montreal Canadiens–obnoxiously radiant sweaters and all–took the ice for what was the fourth meeting of the season between the rivals. Both teams are jockeying for the top spot in the Atlantic Division, a thought that seemed improbable as early as one month ago.

Just a few short weeks ago, the Habs looked like they were going to be seriously undermanned for this all important game in the season series. With no Carey Price and no Tom Gilbert, Montreal was missing some key pieces.

Fast forward to New Year’s Eve, and the B’s were notified that they were going to be without David Krejci (injury) and Brad Marchand (suspension). For every top gun on each side, a counterpart was absent. The loss of both Marchand and Krejci hurt the most for the B’s as they lead the team in goals (15) and assists (22), respectfully.

That should have made the playing surface all the more level, right? Considering that the Canadiens led the season series heading into this game, the Bruins needed to have the rest of the supporting cast step up.

In stunning and humiliating fashion, the Habs embarrassed the Bruins on New Year’s Day by routing the Black and Gold with the final score of 5-1. This was the worst showing by any team in Winter Classic history—no team has lost this particular game by more than two goals prior to this day.

Now that Boston can reset and refocus on the month of January that will feature a five-game road trip, getting healthy is going to be important. If Krejci and David Pastrnak return to the team with the right mindset, then the Bruins could be in decent shape. Plus, Marchand will come back from his three-game ban as a smarter player…hopefully.

One encouraging aspect of the game on Friday was that Matt Beleskey is continuing to be effective. He had the lone goal for Boston, extending his point streak to four games. He did take some time for him to blossom as a top-six forward in the Eastern Conference, but he has put the pressure on himself to produce.

The Bruins will remain at home for this coming Tuesday night against the Washington Capitals. The Caps took the first meeting of the season on home ice. To be honest, this could end up working out well for the Bruins; humiliating loss on national television combined with a winless record against a particular team this year. Boston has something to prove. Will the B’s come out firing?

Hanging around the top of the division and treading water is what this team needs to do at this point in time. When the reinforcements return, the Bruins could be a dangerous team. The loss on Friday did not help the cause, but there is reason to be optimistic.