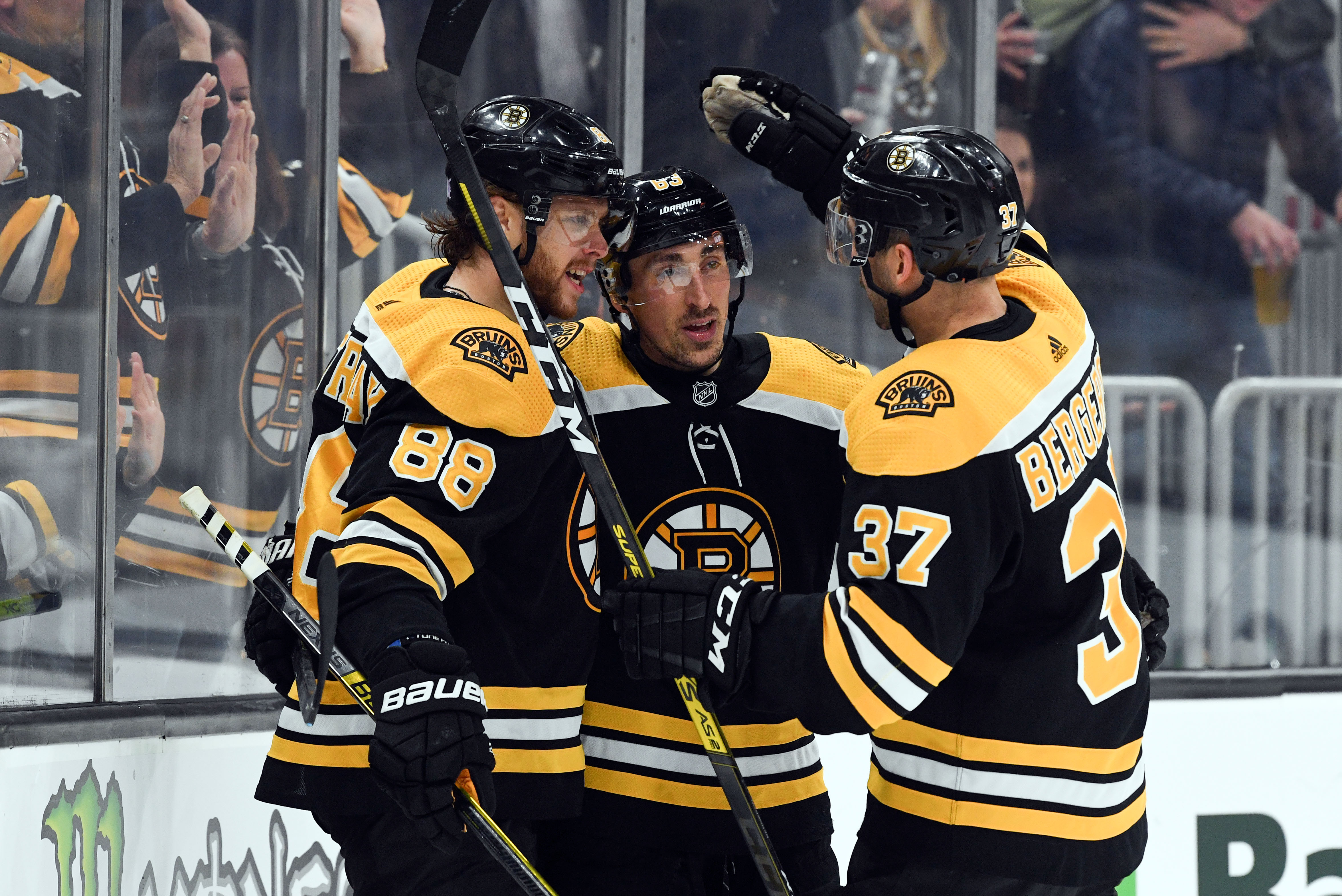 Boston, MA –  The Bruins post-game victory song, the Standell’s “Dirty Water” was blared over the TD Garden loudspeaker for the first time since November 4th. Despite coming into the game 7-0-4 at home the Boston Bruins had suffered three straight shootout defeats in front of their loyal fan-base. Powered by Brad Marchand‘s two goals and Tuukka Rask‘s 38 saves the Bruins hung on to beat their Atlantic Division rival Buffalo Sabres 3-2. For the home team, it was their sixth straight game with a point.

The visiting Sabres meanwhile have now lost their last three, and nine of their last 11. The upstate New York club had started the season 8-2. This was the first of four meetings this season between the two teams.

The Sabres were all over the Bruins in the first period. The visitors built their momentum off of Sean Kuraly‘s Tripping call at 5:05. Just twenty seconds into the Sabres man advantage Jack Eichel set up Rasmus Ristolainen for the 1-0 lead. Eichel fired a shot from the slot that Rask saved but neither Rask nor Brandon Carlo could stop Ristolainen from banging home the rebound.

Buffalo’s next shift had Rask all over his crease. Rasmus Asplund ripped a shot off from the Sabres blue line, then Victor Olofsson followed up for the rebound chance. Casey Mittelstadt had a bid turned away by Rask as well. Then Eichel danced his way through the Bruins defenders and set up a Jimmy Vesey chance in front.

The Bruins didn’t register their first shot on goal until 11:11 when Carlo’s slapshot was saved by Linus Ullmark, who finished with 24 saves. At this point, the Sabres were outshooting the Bruins 14-1.

David Pastrnak‘s forecheck along the boards set up a Zdeno Chara blast from the blue line that Marchand tipped past Ullmark for the tying goal at 13:52.

Just a few seconds later Chris Wagner and Curtis Lazar had a brief fight in front of the Bruins net after Lazar crashed into Rask. Each would be sent off at 14:14 for two minutes for Roughing and Five for Fighting. The first period ended with the Sabres outshooting the Bruins 17-4 while the face-off battle was even at 10-10.

The second opened with an Eichel back-hander on Rask, the forward come in from goalie’s left side. Back down the other end, Jake DeBrusk had a shot steered away by Ullmark.

A collision between Charlie McAvoy and Wagner just inside the red line had Zemgus Girgensons in a foot race with Matt Grzelcyk. The Bruins defenseman was whistled for Hooking on the Latvian’s break at 4:44. The Sabres were outshot by the Bruins penalty kill as Bergeron had a bid stopped by Ullmark.

Asplund was sent off at 13:15 for Holding as the Bruins had pressure in the Buffalo zone.

A Grzelcyk shot from the blue line was stopped by Ullmark but the rebound fell to Marchand who swatted the puck between the Swede’s legs for his second goal of the game, and his 15th of the season. 2-1 Bruins at 14:45.

A Hooking penalty on Charlie Coyle at 15:16 put the Sabres on the power play.  Mittelstadt raced into the Boston zone along the boards, dished to Jeff Skinner at the left face-off dot, who then found an open Conor Sheary at the bottom of the right circle. Sheary fired off a snapshot that Rask hung onto. The Sabres followed this chance up with a three on one opportunity with Olofsson, Mittelstadt, and Asplund in on Chara. Mittelstadt tried to feed Asplund but the stick work of the 6′-9″ Chara knocked the Sabres scoring chance to the boards.

The final thirty seconds of the period were frantic as Boston’s DeBrusk raced in on Ullmark only to be checked by a Buffalo defender before he could get a quality shot off. Back at the Bruins end of the ice, Skinner took a whack at a bouncing puck that went throw Rask’s legs but caromed off of the post just before the buzzer sounded. Boston outshot the Sabres 14-7 for the period while holding a slight 10-9 edge at the face off dot.

The third period kicked off with Buffalo’s Jake McCabe being sent to the penalty box for Holding just thirty-two seconds in. The Bruins power play had a tremendous amount of pressure on the Sabres throughout the man advantage. Grzelcyk kept a clearing attempt in when he leaped for the puck at the blue line. The Bruins cycled the puck around the Buffalo zone, Marchand fed Bergeron out front but Ullmark made the save, Heinen, kept the rebound free and David Pastrnak roofed the loose puck into the Sabres net making it 3-1 Bruins. The goal was Pastrnak’s 20th of the season in 22 games, the fastest a Bruin has netted 20 since Cam Neely did it in 19 games in 1993-94. The Bruins went 2 for 2 on the power play.

At 3:33 Joakim Nordstrom was called for Tripping giving the Sabres a power play. The 14th ranked power play was causing problems for the Bruins penalty kill, 10th overall. Buffalo’s Sheary had a chance at the top of the Bruins crease, Rask made the stop but lost his stick, the rebound fell right to Buffalo’s Evan Rodrigues to the left of Rask. It appeared Rodrigues was going to score but Rask flailed his body across the goal and kept the puck out with the backside of his blocker arm. The sellout crowd of 17,850 erupted in their “TUUKK!” chant.

Around halfway through the third, a long clearing pass from the Buffalo zone went straight to Olofsson at the Bruins blue line. The Sabres forward streaked in on Rask who turned aside the shot, McAvoy cleared away the loose puck as it fluttered in the Boston crease.

Buffalo cut the lead to 3-2 at 12:58 when Brandon Montour buried a slapshot from just inside the blue line. The fourth-year defenseman beat Rask on his glove side with his low slapper. The assists went to Sheary and Rasmus Dahlin.

The final three minutes saw Buffalo threaten the Bruins but Rask was solid. The Sabres pulled Ullmark with about a minute and a half to go. The Sabres kept the puck in the Boston zone for most of the remaining time. Buffalo used their timeout at: 39.8 left in the game. Despite carrying the play the Sabres were unable to find a n equalizer as Boston held on for the 3-2 win. Rask finished with 38 saves on the night. Buffalo outshot Boston 14-9 for the third and 38-27 for the contest. The Bruins won the face-off battle 54% of the time all night.

“It’s really painful right now to digest a game,” said Sabres coach Ralph Krueger. “Where, in Boston, against, for me, the best team in the league at the moment. We played as good a first period as we could play and dominated in every area except for the score. Coming out of that period 1-1, the guys deserved more from that. And I thought they stuck with it and never gave up and kept playing well. Boston raised their game a touch but we still dominated. And special teams was the difference-maker again tonight, which is frustrating. Five on five I thought that was our best game of the season in executing in the way we want to execute.”

Krueger was complimentary of Rask in his assessment of his team’s play. “Overall, the opportunities we created were amazing, I mean Rask had a grade A-game. You feel bad for the guys, they gave it their all.”

“I would describe it as atypical for us,” said Bruins coach Bruce Cassidy. “We’re generally a good team that starts on time, especially in this building. We have a couple not, but tonight was definitely our worst start of the year. In pretty much every manner.”

Cassidy credited Rask for helping the Bruins pull off this win. He was asked about Rask’s play in the first and added “in the second and the third. He was super, he was our best player. We needed every save obviously. Not much else to say other than we didn’t do a very good job right in front of him.”

Of Rask’s save on Rodrigues in the third period Cassidy cracked a joke. “That was a Dominic Hasek save. For you young people out there he was an old goalie in the league that was very acrobatic. And that’s what it was.”

The Sabres continue their road trip on Sunday in Florida when they take on the Panthers at 5:00 p.m. in Sunrise, FL before heading to Tampa on Monday for a 7:00 p.m. puck drop against the Lightning. The Bruins will host the Minnesota Wild on Saturday at 7:00 p.m. before departing for Canada for two games in two days against Montreal on Tuesday followed by Ottawa on Wednesday.