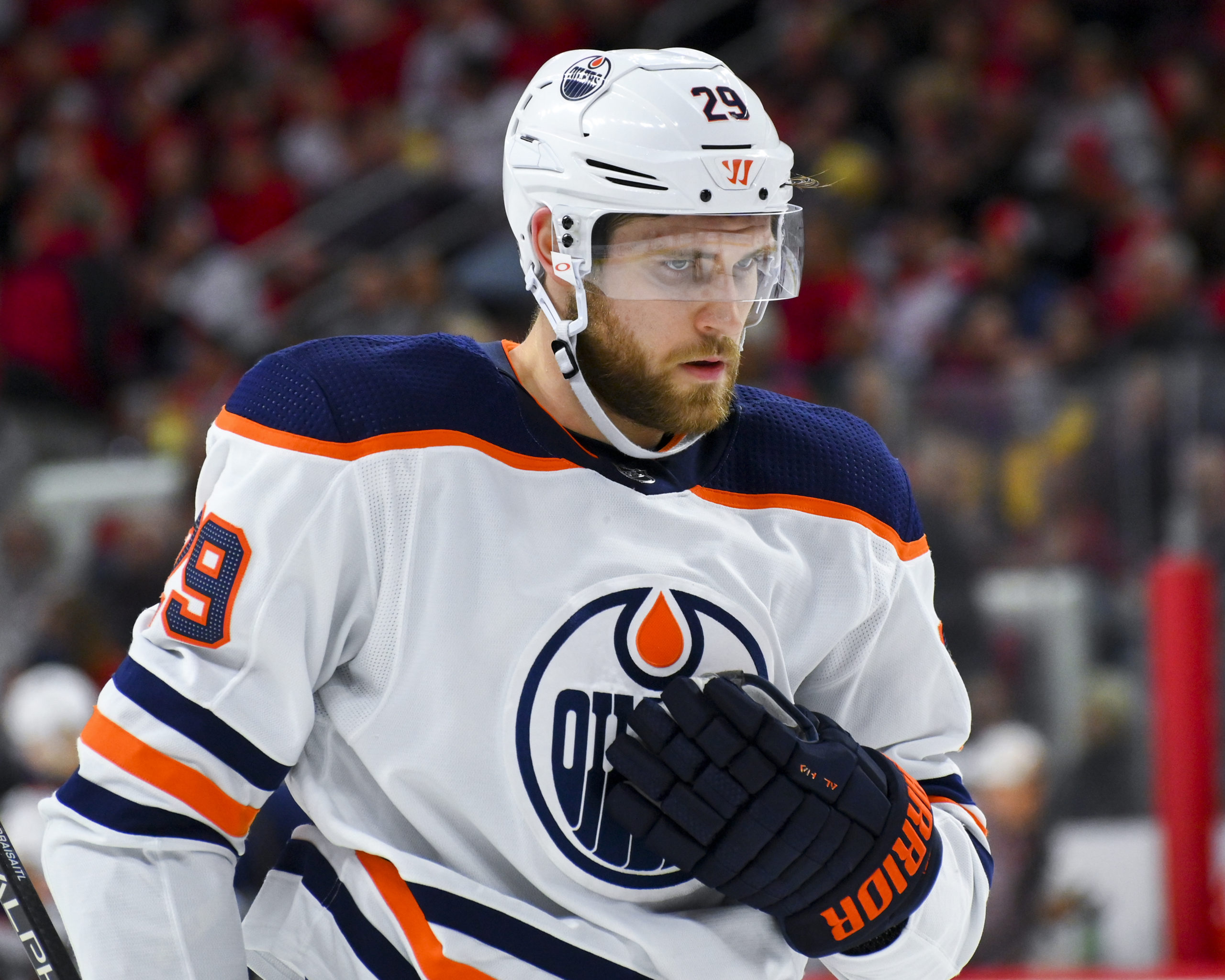 Boston, MA – A pair of third-period goals by Edmonton Oilers center Leon Draisaitl was the difference between victory and defeat for the Boston Bruins on Thursday night. Draisaitl’s pair tied the game at 3-3 and then put the Oilers ahead for good before the visitors added a late insurance goal for the 5-3 win.

The comforts of home have been good to the Bruins thus far, 5-0 on TD Garden ice, but tonight they may have been too comfortable as they could not hold on to three leads. Twice the Bruins surrendered the lead less than a minute after gaining it.

“Yes, 100%. I have to do a better job,” said Bruins coach Bruce Cassidy when asked if the team beat themselves on Thursday. “The mistakes we made, the line changes, the puck management is a little bit different.”

“When the team beats itself, it’s on us a staff,” added Cassidy. “We have to do a better job getting them ready to play and to understand the details that it to win. The lack of not shooting, it’s 100% on us. We just have to get that message across.”

David Pastrnak gave the Bruins the early 1-0 lead when he deposited a Patrice Bergeron pass between the legs of Oilers goalie Mikko Koskinen (26 saves) at 4:45 of the first period. Pastrnak split the Oilers’ defenseman at the blue line before firing off his shot from the right face-off dot for his third goal of the season.

The Oilers answered right away when defenseman Evan Bouchard‘s wrist shot from the slot beat Bruins keeper Linus Ullmark (23 saves)glove-side high to tie the game 1-1 at 5:29. Bouchard drifted in from the blue line to catch a Draisaitl pass all alone before tying the game. The goal was Bouchard’s second of the year. Ryan Nugent-Hopkins also assisted on the goal.

Like the first, the second period saw the Bruins jump out to a lead when Brad Marchand backhanded a loose puck past Koskinen at 5:06 to make it 2-1. Pastrnak skated into the Oilers zone and took advantage of an incidental trip of Oilers forward Zach Hyman by Bergeron to fire off a pass back towards Bergeron in front of the Oilers goal. Defenseman Bouchard got a stick on the puck, but it fell to Marchand at the right of the goal, where he sent a top-shelf shot past Koskinen for his sixth of the season.

Hyman got his just desert only twenty-four seconds later when he skated his way past the Bruins defense along the goal line to net his eighth of the year. Hyman corralled a McDavid pass at the half-wall and skated by Jake DeBrusk, Derek Forbort, and Charlie McAvoy before backhanding the puck past Ullmark low on his blocker-side.

Defenseman Brandon Carlo gave the Bruins the 3-2 lead at 17:14 when his slapshot from the point beat Koskinen glove-side. Carlo’s first of the year was assisted by Matt Grzelcyk and Bergeron.

The wheels fell off for the Bruins in the third period as Draisaitl netted two goals in three minutes to tie the game and then give the Oilers the lead.

Carlo flubbed a pass attempt coming out of the Bruins corner, and the puck went right to Draisaitl in front of Ullmark. The 6′-2″ German easily beat the Bruins keeper with a wrist shot to the top left corner of the Bruins, tying the game at 3-3 with just under fifteen minutes remaining.

Draisaitl’s second came at 9:26 when he outmuscled Grzelcyk and then Carlo to tap in a pass from defenseman Cody Ceci below the goal line. Ceci skated from the blue line past DeBrusk and centered the pass to a waiting Draisaitl for his league-leading 12th goal and 26th point.

The Bruins had two solid chances to tie the game after Draisaitl’s strikes. The first came around the nine-minute mark when Nick Foligno hit the post on a snap-shot in his first game back since October 20.

Then a minute or so later, Pastrnak pounced on a loose puck in front of the Oilers net. Koskinen made a stop on a Grzelcyk slapper from the blue line, but a scramble in front kicked the puck out where Pastrnak had what looked like a wide-open lane for a shot. Somehow Koskinen got a skate on Pastrnak’s wrister.

Unlike Pastrnak, the Oilers’ Ceci made sure to capitalize on his excellent look at a wide-open net with 2:19 left. A clearing attempt by Ullmark behind the Bruins goal had defenseman Connor Clifton unable to hold onto the pass, and the puck slid out in front of Ullmark, where the 6′-6″ Swede made the initial stop on Edmonton’s Colton Sceviour. Ullmark fell backward as he stopped Sceviour and paddled the puck out of his crease, but it landed in front of Ceci. With four Bruins defenders down low, Ceci was wide-open and had a good lane to fire in the puck with Ullmark on his backside. Sceviour and Ryan McLeod assisted on Ceci’s first goal of the year.

“It sucks, especially when it feels like you have a good grasp on the game, and it slips away there at the end,” said Ullmark. “It’s something we can certainly learn off, to play a full 60-minute game, me included. And we’ll go from there.”

“We got behind quickly, but then the ability to get it right back again was a big factor,” said Oilers Head Coach Dave Tippett. “For the most part, we competed hard. It’s good. We don’t want to lose two in a row. We played well.”

The Oilers continue their road trip with a game in Buffalo against the Sabres on Friday at 7:00 pm. The Bruins will travel to New Jersey for a matinee game against the Devils on Saturday at 1:00 pm.