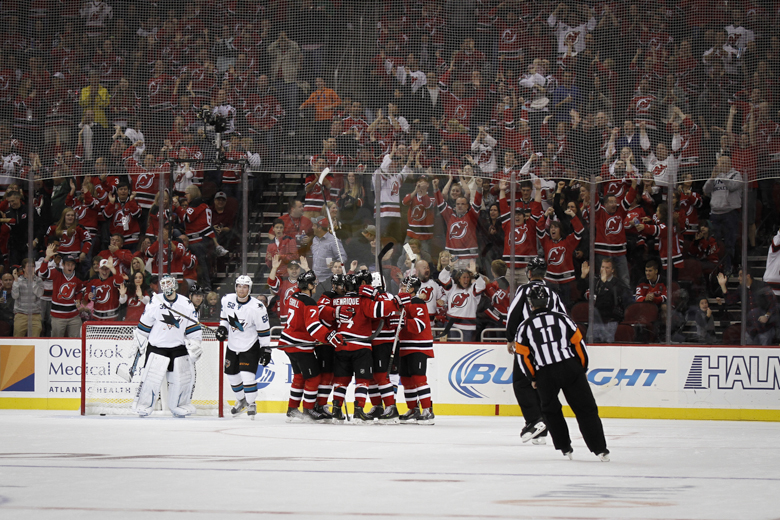 The New Jersey Devils celebrate a goal in the 3rd period against the San Jose Sharks in a game on October 18, 2014 at the Prudential Center in Newark, NJ.

Bruce Boudreau and Todd McLellan: When Will the Heartbreaks End?-January 23, 2014

The 2013 playoffs provided a dubious honor for Anaheim’s Bruce Boudreau and San Jose’s Todd McLellan. Both men entered the heartbreak coaching ranks when they suffered their fifth playoff eliminations in as many appearances. Boudreau and McLellan are now the 13th and 14th coaches to have five playoff appearances without yet reaching the Stanley Cup finals.

If ever there is a goal for both men it is to overcome this stigma that has frustrated both of these great coaches throughout their dynamic coaching careers.

Both men rank among the game’s greatest coaches. Both men rose through the Top 50 ranks last season. Boudreau jumped 10 places in rank with his superb comeback season with the Anaheim Ducks. McLellan jumped only one step but did a superb job in taking an aging team into the playoffs, even though his San Jose Sharks were struggling and out of playoff contention at one point.

Despite their achievements last year, both men were stung in the playoffs. Gabby suffered one of the greatest upsets in the 2013 playoffs when his heavily favored Ducks were beaten in the first round by an aging Detroit Red Wings. McLellan did slightly better: His team swept the No. 2-seeded Vancouver Canucks (and costing Alain Vigneault his coaching job) before falling to Darryl Sutter’s defending Stanley Cup champions, the Los Angeles Kings.

As it stands, Boudreau and McLellan are tied with the late Herb Brooks and Kevin Constantine in the heartbreak coaching ranks, but both men are far from being the worst active heartbreak coaches in the NHL today. That honor goes to Dave Tippett of Phoenix and Barry Trotz with Nashville. Tippett is 0-for-8 and Trotz is 0-for-7 in terms of playoff futility.

The question remains though: Do either Boudreau or McLellan have the players needed to overcome their mutual playoff curses? Will 2014 be the year when playoff heartbreaks end for either man?

San Jose faces the tougher road. After a scintillating start where they went 8-0-1 when the bell rang and were 19-3-5 on Dec. 3, the team has only gone 12-9-1 since (although they have won their last three games). The team has been plagued with injuries to stalwarts Logan Couture, Tomas Hertl, Raffi Torres and Martin Havlat.

Despite their depleted ranks, San Jose still has goal scorers, such as Patrick Marleau and Joe Pavelski, and Joe Thornton, who leads the NHL in assists. Winger Brent Burns and blue liner Justin Braun are solid two-way players, while Pavelski, Marleau and Dan Boyle are the keys to San Jose’s power play, which ranks seventh in the NHL. Goalie Antti Niemi remains durable and solid between the pipes, although his efforts are sometimes undermined by an average penalty-killing unit. Overall the Sharks are fifth in the NHL in both goals scored and fewest goals allowed, respectively.

Interestingly, just as the Sharks’ hot streak ended in December, the Ducks’ ascension into first place in the Pacific and their domination of the NHL began.

Right now, the Ducks lead the Presidents’ Trophy race by three points over the Chicago Blackhawks and have a nine-point lead over San Jose in the Pacific. They have gone 19-2-0 since Dec. 3 and are second in the NHL in goals (thanks to Corey Perry and Ryan Getzlaf). The Ducks are getting fantastic two-way effort from forwards Perry, Getzlaf, and Dustin Penne, along with defencemen Francois Beauchemin and Hampus Lindholm.

Still, there are potential flaws that could compromise Anaheim’s Stanley Cup potential. Their defence is worse than San Jose’s, and their special teams are not superlative either. Potential Stanley Cup playoff rivals Chicago, Pittsburgh and St. Louis are much stronger on the power play. The Ducks penalty-kill capability is weaker too; Pittsburgh, Vancouver, Los Angeles and Boston are all better on the penalty kill than Anaheim.

Based on what they have now, does Anaheim have the collective goods to end Boudreau’s playoff curse?

It’s still a long skate to April—that’s a lot of time for a lot of bad things to happen to both Boudreau’s and McLellan’s teams along the way, but the challenge of being the great coach (which they both are) is always in overcoming long odds. Chicago’s Joel Quenneville suffered 10 playoff failures before he had his first Stanley Cup final (and win) in 2010, while Ottawa GM Bryan Murray had 11 failures as a coach before he reached the finals in 2007.

There is always hope.