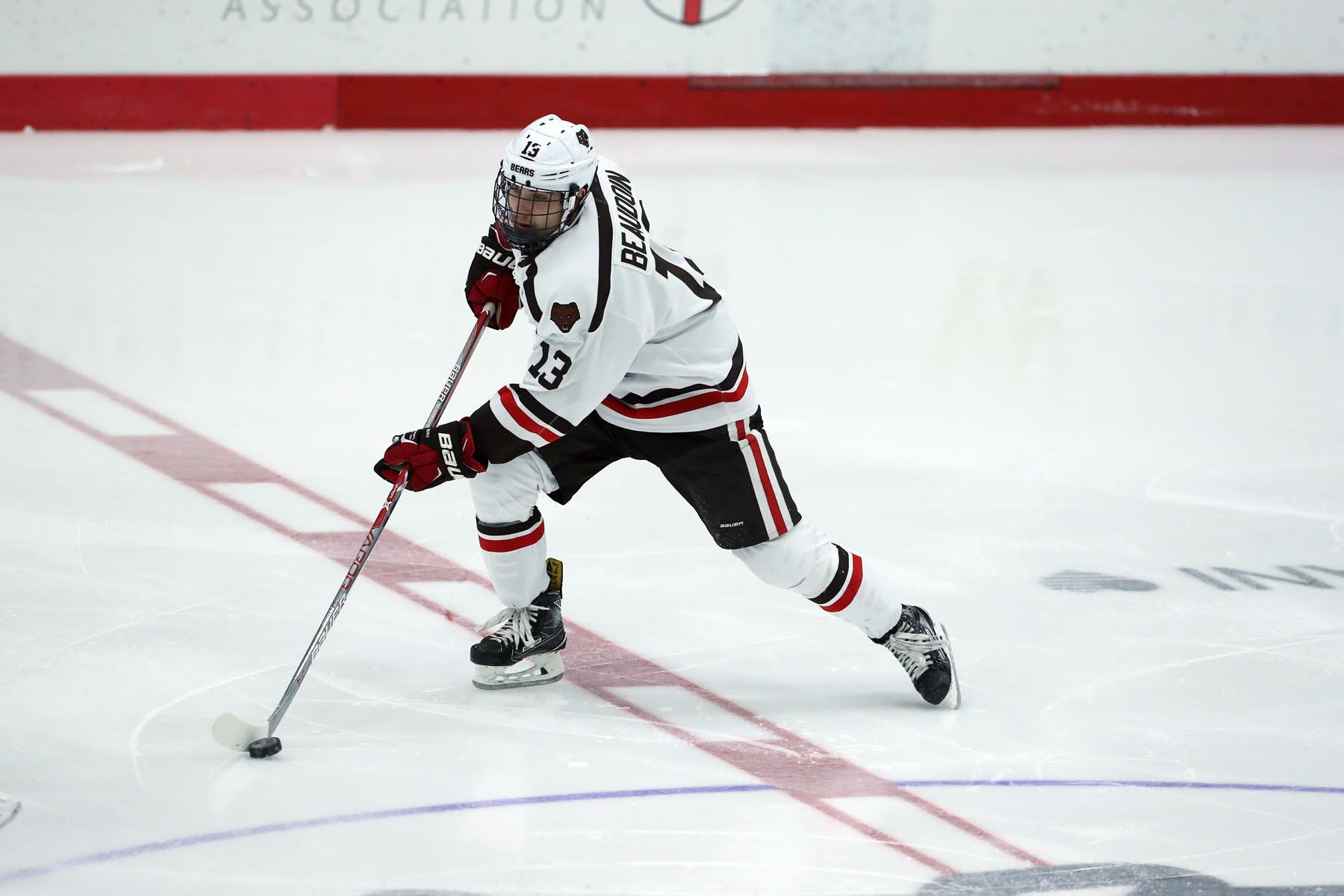 Providence, RI — On Saturday night, the Maine Black Bears shutout the Boston University Terriers in one of their best efforts of the season. With the offense clicking, Maine took a break from conference play on Monday night.

The Black Bears faced the Brown University Bears at Meehan Auditorium in Providence and looked to continue their eight-game unbeaten streak. Brown, meanwhile, opened their home schedule looking to build on momentum following a dramatic tie against UNH.

The Bears trailed 4-0 on Saturday night before storming back with four third period goals to tie the Wildcats in Durham. Both teams entered with momentum and offensive punch. Neither walked away with the win.

The lead was shortlived, as Keeper took a tripping penalty two minutes after the goal. Brent Beaudoin scored 20 seconds into the ensuing power play. Maine outshot Brown for the first period, 10-6, but the goalies stopped all other shots to send the game to the first intermission tied.

Brown surged out of the gate to start the second period, outshooting Maine 13-7 in the frame. Tim Lappin found twine on a blue line slap shot to give the Bears a 2-1 lead.

Brown’s offense kept buzzing through the rest of the period, but Maine landed the next score. Mitchell Fossier scored his seventh of the season to tie the game just before the halfway point of the period. Maine got a chance for the lead when Tyler Bird was called for tripping. Brown almost killed the whole penalty, but Black Bear Captain Chase Pearson used two Brown players to screen Kania and fired a puck from the left circle. Maine did not hold the lead for long, though. Two minutes after Pearson’s goal, Tyler Bird tipped in a Josh McArdle shot to tie the game.

The teams combined for 42 attempted shots and 24 shots on goal in the third period. Kania and McGovern held firm in their respective goals. Each team got only one goal. Brown’s came first. Anea Ferrario finished a smooth Bear transition play for his first career collegiate goal. Just a few minutes later, Maine tied the game on Chase Pearson’s second goal of the night; a wrister from the high slot. Maine dominated the end of regulation, but could not bead Kania for the winner.

In the overtime session, Maine completely dominated the shots, 5-0. Brown did not even attempt a shot on goal in the frame, while Maine attempted 11 shots. Luke Kania stole the show and kept Maine from escaping Providence with a win, ending the night tied 4-4.

Brown’s effort earned them their second consecutive tie against a Hockey East opponent. Their record climbs to 5-8-2. The Bears return to ECAC play this weekend with two home games against ranked opponents. #19 Colgate and #4 Cornell visit Meehan Auditorium. Puck drops at 7 pm on both Friday night and Saturday night.

“Offensively this was a great weekend for us. But we didn’t play desperate until the end of the game and overtime. We’ve gotta be focused on getting sharper defensively and keeping our energy level up the whole night.”

“It’s frustrating when we don’t win after an overtime like that, but I’m more frustrated with our effort until they scored to go up 4-3. We needed that urgency at other points through the game. It’s hard to win games in college hockey. You’ve gotta bring it every night for every shift.”

With the tie, Maine extends their unbeaten streak to nine games. Their record runs to 11-7-2. The Black Bears continue their string of road games with a two-game set against #10 Northeastern this weekend. Puck drops at 7 pm on both Friday and Saturday night at Matthews Arena in Boston.