Worcester, MA – Sudden death wasn’t so sudden at the DCU Center on Friday afternoon. The Western Michigan Broncos and Northeastern Huskies skated to a 1-1 tie after 60 minutes of regulation play. The NCAA Men’s Ice Hockey Regional game would need extra time and an official review to determine an outcome.

Broncos sophomore Luke Grainger blocked an errant Devon Levi clearing attempt behind the Huskies net, then beat the goalie to the opposite post but not before Levi made a highlight-reel acrobatic save on the wraparound attempt.

It was a phenomenal “Oh no, he didn’t!” moment to all witnesses. But all potential goals are reviewed by the NCAA officials.

After a brief review, it was a good goal after all. Levi did get his blocker on the puck, but it had crossed the goal line. Then the Broncos stormed the ice to celebrate in front of Levi.

“I thought he made a great save,” said Grainger of the play. Grainger even smiled in disbelief on the jumbotron. “He makes a lot of good saves, so I just hoped for the best.”

The Broncos controlled the first period, but Levi, one of the NCAA’s top three goalies, kept the Huskies in the game. The sophomore from Dollard-des-Ormeaux, Quebec, saved ten of eleven in the opening twenty.

As great as Levi was, WMU’s Brandon Bussi was equally impressive in victory. The 6′-5″ junior from Sound Beach, NY., was nearly flawless.

“He played exceptional tonight,” said Grainger. “He’s been good all year, he’s the backbone of our team. When he’s playing well you feed off it and you play well with that.” 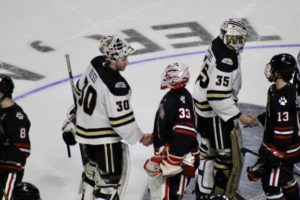 Cole Gallant gave the Broncos the 1-0 lead at 14:01 when he snapped a rocket from the top of the right circle into the top left corner of the Northeastern goal. WMU’s Ethan Frank picked off a Jeremie Bucheler pass, then quickly sent Drew Worrad and Gallant back the other way on a two-on-one. Worrad slid the puck over to Gallant for the go-ahead goal.

“I picked my head up and saw a little bit of net there and threw it there,” said Gallant on his strike. “I’ve been working on a shot like that from the outside in practice, so it worked out nice.”

The Huskies had a better second period as they started to generate more offense in the Broncos zone. It began with a penalty on Broncos defender Cedric Fiedler at 6:17. 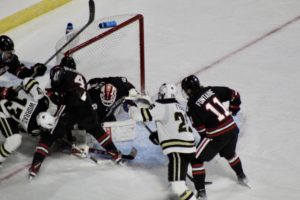 Northeastern didn’t score on the man advantage, but they found their groove with the extra attacker.

“I thought we dominated the second period,” said McDonough. “I thought it was just a matter of time before we were about to score.”

“I thought that second period was setting us up for another good period in the third,” added the 6′-2″ junior from Milton, MA.

The third period is when the Huskies, and McDonough in particular, have done some of their best work.

McDonough faked a shot with the puck on his stick and brought WMU defenseman Jacob Bauer to the ice, drove to the net, and got a shot off. Bussi (30 saves) made the initial pad save in the split position, but McDonough was able to whack at the rebound to tie the game with 2:20 remaining.

“Sam Colangelo made a nice play and drew the defenseman to him and hit me in the middle (of the ice),” said McDonough of his game-tying goal. “I’ve gotten a few shots blocked there in the same spot, so, I tried to pump and the kid (Bauer) fell and I just went around him. I whacked at it a few times and luckily it went in.”

“It’s the belief in each other,” said first-year Broncos head coach Pat Ferschweiler. “I walked in the room, and I said ‘I believe in every guy in here. Believe in yourselves, look to the guy on your right and your left and believe in him as well. Just go out there and give it everythingyou have.'”

“Certainly it happened quickly but I think we’re comforatble with it to go long or end quickly,” added Ferschweiler. “We are a team that plays, it’s what we do.”

And now they play again on Sunday. The Broncos will face the winner of Minnesota vs. Massachusetts. ESPN will determine the puck drop.