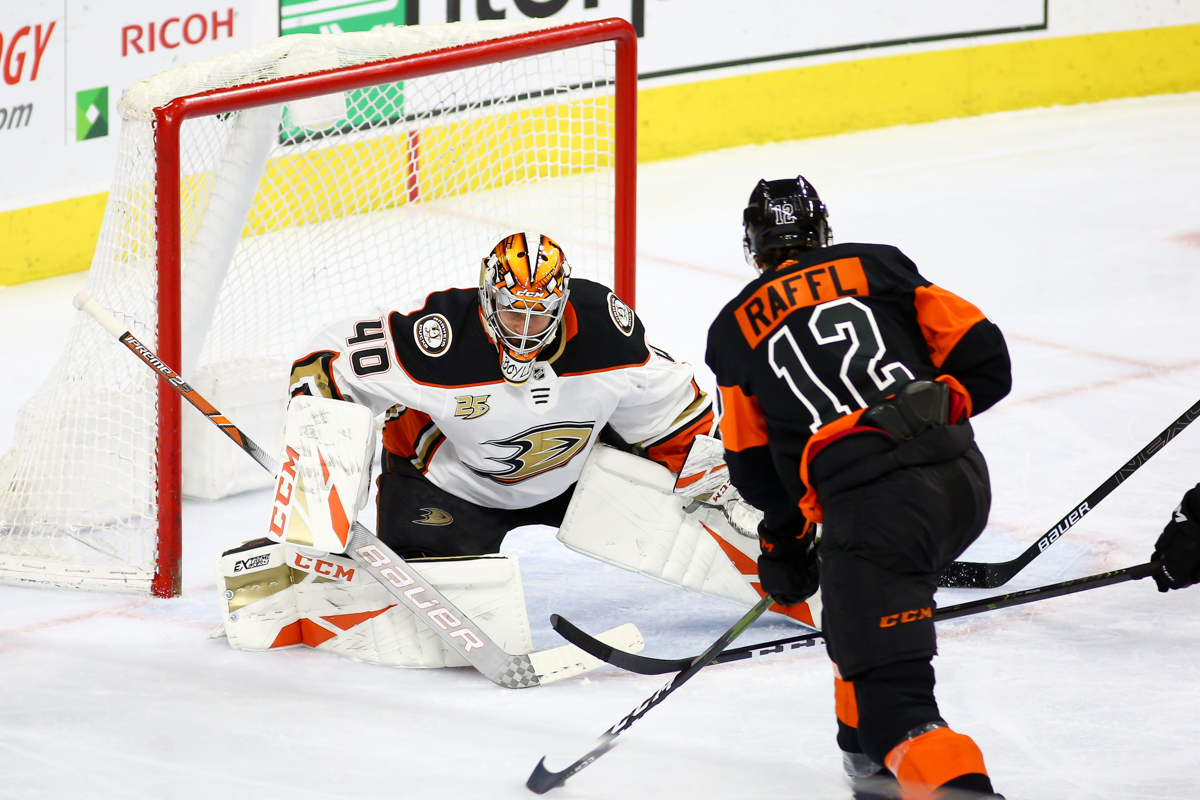 Goalie Kevin Boyle (#40) of the Anaheim Ducks making his NHL debut after replacing teammate Goalie Chad Johnson (#1) at the start of the second period stays square to shooter, Left Wing Michael Raffl (#12) of the Philadelphia Flyers

The last time the masses assembled in Anaheim for an NHL game, the Ducks stunk up the arena with a 13-shot debacle which was the second game of a seven-game losing streak extending to the present. What? You’ve heard that they’re lost something like 20 games, right? Well, not so fast, because they won two in a row in mid-January. Never mind that they hadn’t won for a month before that two-game outburst.

The last time the masses assembled for NHL hockey, the Ducks weren’t using their GM as coach. John Gibson wasn’t hurt. Ryan Miller wasn’t ready to come back from an injury of his own. The playoffs weren’t a faint hope far off on the horizon. Oh yes. Lots of things were different. And now here’s Vancouver.

Aside from the ever-present question: What will it feel like to win again? was the ever-lurking question of a writer: What can possibly be said about this team that will retain the patient reader’s interest (‘cause it kinda seems like nothing)?

There were some stories. Some milestones. Getzlaf just surpassed Teemu Selanne as the Ducks player with the most appearances in the team’s uniform. Corey Perry will next supplant the Finnish Flash, who played 966 games of a total of 1451 as a Duck.

Cam Fowler surpassed all other Ducks’ Dmen for games played as a Duck with his appearance in the Vancouver game. His total is now 595. Guess who holds the record?

Ruslan Salei, and if you remember him, you’re deep in your Mighty Ducks trivia. Speaking of which, the movie was being celebrated on Wednesday night. I’m not giving that any more pixels. If you’re interested, we can’t be friends any more. But keep reading for more about hockey.

Fowler also sat tied in assists with Scott Niedermayer for all-time assists for a defensman in franchise history, with 204 being the record.

Goalie Kevin Boyle made his NHL debut in the Anaheim cage a few nights ago in Philadelphia. Through two periods of relief duty, he allowed two goals on 26 shots. He appeared again in net for Anaheim Wednesday, his NHL debut as a starter. He would win the game with a shutout, 1-0. More on him in a moment.

Regular backup netminder Ryan Miller stayed in the net right to the end of the warm-up period, taking mini-breakaways from a number of guys including Corey Perry as the time wound down. Perry, as was always his habit, stayed on the ice longest in the warm-up. He exited just as two Canucks were finishing their pregame ritual, then ran down the tunnel after coming off the ice surface.

A couple of Ducks players have at least a mini-streak going in scoring, or a notable record of late. Nick Ritchie has 13 points in the 18 games prior to Vancouver. He did not add to that total versus the Canucks. Rickard Rakell had 6 points in the past 11 games coming into Wednesday.

So there were some things to watch for, but then young Boyle supplanted them all.

Boyle, by the way, was delighted with his win and not afraid to show it. He’s not a kid, being 26, but this being his first chance at an NHL cage, and turning out so well, he was like a boy again as he talked afterwards.

“It’s something that you dream of growing up as a little kid. Playing street hockey. So to be able to come out here and get a win, in your first game, is, I just can’t describe it.”

He later added, “I can honestly say it’s exceeded anything that I ever dreamt of.” He laughed and smiled through the interview.

Boyle said that his family was in Anaheim, as they had been in Philly. That was easier, as the game there was an hour from his New Jersey home. But this time, a bunch had flown out, including his folks and his brother and sister-in-law. His wife is also with him out on the West Coast.

After the game, he gave the stick signifying his first star status to a family he’s known as fans of the Gulls. Boyle has spent the better part of the last three seasons there after a four-year US college career and half a season in the ECHL.

This should be remembered as one of the great moments of this season, no matter what happens as things move ahead.

And just to put all of the Ducks’ recent woes into longer perspective, the team is actually tied for fourth amongst NHL teams in points earned since 2013-14 and tied for sixth in wins. They were also tied for fourth in standings points earned in calendar year 2018. They led the NHL in fewest losses in regulation at home in that year also, with six, and they allowed the second-fewest goals in the year, 214, notched in a tie with Winnipeg.

So wait and hope, Ducks fans. Things will get better. Hopefully that happens before a lot more suffering. But any success depends on the team rallying behind their GM, and him making some smart moves to retool, as he described his task.

And for that to happen, Murray’s experiment behind the bench, which he firmly said is not about coaching but rather evaluating the talent (and drive) of his players, has to go well. That started Wednesday night also, with a win.

See my other story for the details.