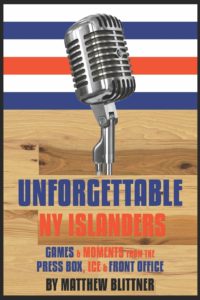 Matthew Blittner completes his hat trick with the final volume in his historical trilogy of the greater New York City hockey teams (Rangers, Devils, and Islanders) as seen from the eyes of the members (male and female) of the Fourth Estate. Following the same formula that he used in his previous works Blittner practices the rare art of getting those who ask the questions (and write the rough drafts of sports history) to answer his questions about their experiences in covering the Islanders: what led them to become hockey journalists; radio and TV broadcasters and color men; In-Arena hostesses, and PR men.

The end result is a pastiche of memories of the collective love affair these people have with the Islanders as well as with their own careers. We hear from Elmer Ferguson Award winner Frank Brown about how he got into hockey journalist (when a Hall-of-Fame journalist like Frank Brown speaks it is a chapter worth reading).

With compact brevity Blittner’s subjects tell us about their pasts, their favorite Islanders games of all time, their most enduring memory of covering (or working for) the team; and, finally, an appreciative shout-out to Islander Fans around the world.

Unforgettable Islanders is less hyperbolic than his previous two works (which is a good thing). Blittner’s calmer tone allows for better, smoother reading and you can absorb the educational insights found between the pages more easily because of it.

Islanders fans can read how the press interpreted oft-told tales like the great comeback in the 1974/75 quarterfinals against Pittsburgh; the dynastic years of 1979/80 to 1982/83; and the great upset of the Penguins in the 1992/93 playoffs to name a few. We see the great players in Denis Potvin, Bryan Trottier, and Billy Smith ably led by the late Al Arbour.

But like his previous two Blittner’s history of the Islanders must be read as a primer for those young people who aspire to work in the hockey world as journalists, broadcasters, PR people and Arena hosts. You get to read first-hand accounts of what it takes to work in the hockey world: the sacrifices, pratfalls, and also the front-row seat access and the golden opportunities to witness the greatest show on ice: NHL hockey.

Reading Unforgettable Islanders it is a reminder that the doorway is not locked and barred. It can be opened if you have the will and courage and wisdom to find the means and do the work that must be done to go through that door and explore new worlds and meet legendary people in the process.