Book Review: The Down Goes Brown History of the NHL 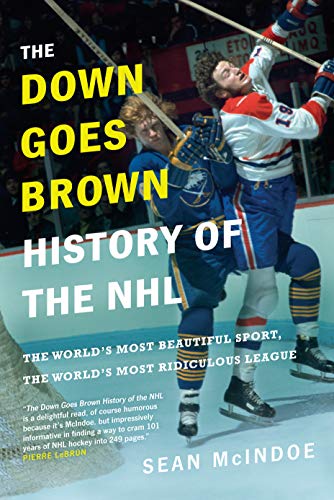 While it has consistently produced the best professional hockey for most of the past century, the National Hockey League has also experienced its share of confusing, perplexing and even embarrassing moments to go along with the greatness of Gretzky, Howe, Lemieux, Crosby, Ovechkin and the rest. In The Down Goes Brown History of the NHL, author Sean McIndoe (of Down Goes Brown)  takes us on a whirlwind tour of the NHL’s history, looking at everything from the formation and evolution of the “Original Six” to the 1967 expansion to the Canadiens’, Islanders’ and Oilers’ dynasties to the present day.

The book flows beautifully, its topics organized thoughtfully into topics that help explain each aspect of the league’s evolution. Fans of any particular team might quibble that their team doesn’t get quite enough attention in the book, but that’s to be expected with a book covering the 100-year history of a league that is today comprised of 31 (soon 32) teams.

All of the league’s biggest and most controversial moments are covered (Hull’s Cup-winning goal, the Gretzky trade, the arrival of Soviet defectors, the Todd Bertuzzi incident). He brings us inside the labor disputes that derailed and/or canceled the 1991-92, 1994-95, 2004-05 and 2012-13 seasons, helping to explain how the business evolution occasionally collided with the league’s traditional operating procedures. And McIndoe does a fantastic job illustrating how the league gradually evolved from being primarily a Canadian pro league (for its first 50 years) to including players from the US and Europe.

As this zany 2019 playoffs continues, it evokes memories of the season many – including McIndoe – consider to be the best in NHL history, 1992-93. That season was deservedly given plenty of coverage in The Down Goes Brown History of the NHL, and this season’s offensive resurgence and playoff team deck-shuffling are quite reminiscent.

It’s fair to say that The Down Goes Brown History of the NHL is the best NHL history book available – by a landslide – and should be near the top of every diehard hockey fan’s wish list.