Take a look at the image accompanying this article. What do you think when you see it?

When a fight breaks out during an NHL game, the crowd is often louder than at any other point, even when the home team scores a goal. The enforcer on the home team will often seek out a fight to energize the crowd, particularly if his teammates aren’t able to do so by playing actual hockey. Unfortunately, fighting exacts a huge toll on its participants, a reality that is often lost during the frenzy of excitement that accompanies the on-ice fisticuffs.

Fighting has been a core component of NHL hockey for many decades, but it has changed more than fans probably realize. Originally, it was an opportunity for an aggrieved player to take vengeance for a cheap shot: “you slash me, I’ll fight you.” Then Wayne Gretzky came along, and the need for an “enforcer” to protect him paved the way for the likes of Dave Semenko and Marty McSorley, their fighting skills as important (if not more so) than their hockey skills. If someone took a cheap shot at Gretzky, you could expect Semenko or McSorley to quickly initiate a fight that made the perpetrator regret their infraction.

The instigator rule – implemented in 1992 – imposed a harsh penalty on the enforcer, substantially muting their ability to police the on-ice action. Many “old school” hockey fans bemoaned the instigator rule, as it took away the players’ ability to police themselves on the ice. And a large percentage of fans believe to this day that the declawing of enforcers has resulted in more cheap shots and illegal stick work, because the perpetrators no longer have to fear the consequences as they did when the likes of Semenko and McSorley were ready and waiting to pulverize them.

Such logic is flawed, of course, as there have been plenty of instances where the “enforcer” demonstrated horrifically poor judgment, meting out what they believed to be “justice” only to find themselves serving extremely lengthy suspensions. Whether it’s McSorley taking a baseball bat swing at Donald Brashear or Todd Bertuzzi sucker-punching Steve Moore, it’s painfully clear that in the heat of the moment, hockey’s enforcers are often too hot-headed to be expected to demonstrate sound decision-making skills.

Making matters worse are the health ramifications of fighting on the ice. Not only are the players engaged in bare-knuckle brawls (dangerous enough in itself), but when their helmets come off, they’re at far greater risk of having their heads crack against the ice at the end of the fight. NHL enforcers are far more prone to suffer concussions on the ice, and they’re far more prone to suffer from opioid addiction, alcoholism and depression off the ice. It’s almost certainly no coincidence that the lives of Bob Probert, Derek Boogaard, Rick Rypien, Wade Belak and Steven Montador ended far too early.

Author Jeremy Allingham has been a hockey fan for his entire life. But when he went to a junior hockey game on a random Friday night and saw two teenagers engaged in a bare-knuckle brawl, it delivered an inescapable epiphany. The result was Major Misconduct: The Human Cost of Fighting in Hockey, in which he takes a critical look at the impact of fighting in hockey. It’s often hard to read – and should be especially difficult for the fans who consider fighting to be essential – because one cannot read the book without internalizing the severe price paid by the players who take on the enforcer role. 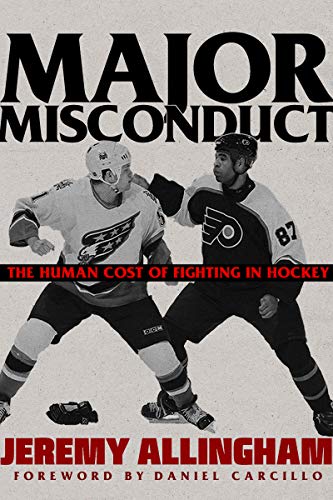 What event (or series of events) resulted in you tackling this topic in the first place (for the CBC)? What inspired you to dig deeper to write the book?

I think I started out like most hockey fans across North America. I played the game from an early age, and through my participation and fandom, came to internalize the pro-fighting messages from so many of hockey’s most well-known commentators. I believed wholeheartedly the Don Cherrys of the world when they said “two good guys going at it and nobody gets hurt”. I used to cheer enthusiastically for Gino Odjick as he patrolled the ice, looking for scraps at the Pacific Coliseum for the Vancouver Canucks. But that all changed when I had an epiphany moment at a major junior hockey game. It was a Friday night out with the boys for a few beers, laughs and a good old hockey game. We settled into our seats and before the puck could even hit the ice, a fight broke out. The crowd rose up around me with a roar as blows were exchanged at center ice, but for some reason in that moment, I zeroed in on the players’ faces. These guys were just kids (16 and 17 to be exact). In that moment I had to ask myself WHAT ARE WE DOING? We are thousands of adults screaming for children to pulverize each others’ faces. My stomach sank and I could never see fighting in hockey the same. And now, I truly believe that fighting in hockey is a blemish on our sport and on our culture that injures our players and hides in plain sight.

When watching NHL players, most fans reconcile it by pointing out that they are grown men capable of deciding whether or not to engage in fisticuffs…

I find that point about grown men making the decision to fight problematic. Because at least here in Canada, players, pretty much as a rule, have their first fight in junior when they’re still children. Fighting numbers in major junior here are higher than in the NHL. We as a culture have apparently accepted the idea that kids bare-knuckle boxing on ice is okay. (Bare-knuckle boxing is illegal everywhere in Canada and in 47 states EXCEPT on the rink). You would be incredibly hard-pressed to find a player who has their first fight in a professional hockey setting as an adult. So, I just don’t think that argument of grown men making the decision to fight holds water. These players, like everyone else, have been told that the fighting is okay. that it is relatively safe, and that it is integral to the game. They simply do not have the opportunity to start from scratch at the age of 18 and ask themselves: “is this really something I want to do?” Also, the education on traumatic brain injuries among the junior hockey players I interviewed for the book was sorely lacking.

I believe that the economic cost of fighting in hockey (not just lawsuits, but also people staying away from the game and keeping their kids away) is much greater than the economic benefit that it provides. The NHL’s product can now easily be consumed worldwide, and the percentage of consumers who consider fighting to be essential to hockey is likely far smaller than it was when the NHL appealed only to Canadians and fringe American sports fans. What do you think? Is fighting costing the NHL big money?

I think it’s really hard to quantify whether fighting is costing them money or making them money. Gary Bettman and the owners wouldn’t admit it publicly, but I would bet they still believe that fighting helps put people in the seats. Go to any game, and when a fight breaks out the roar you’ll hear from the crowd is just as big, if not bigger than for a goal. Here in Vancouver, just this past week, our local newspaper had a photo of a fight on the front cover of the sports page. So there’s certainly a pervading belief that the scraps sell. But you’re right, I don’t think that many fans would actually miss it if it was legislated out. And taking your idea a step further, I actually think the ability to grow the game of hockey within non-traditional fan bases will improve once fighting is gone.

You interviewed numerous players for the book… which of their stories did you find to be the most haunting?

As far as the stories that stood out, I focused in on three players: James McEwan (ECHL), Stephen Peat (Washington Capitals) and Dale Purinton (NY Rangers). All of their stories are incredibly powerful and heart-wrenching, but I think the story of Stephen Peat stands out the most. It was the hardest story to get and the contrast between his explosive power on the ice and his struggle with mental health and traumatic brain injuries after his career is the most shocking. This is a guy who could bring 20,000 people to their feet with the drop of his gloves who has ended up struggling with homelessness, estrangement, addiction and has been in and out of prison. That being said, I feel a deep connection to all three players and respect them for the effort they’ve put into facing their ongoing challenges with brain injuries.

How would you approach the effort to eradicate fighting in hockey? Obviously writing this book was a great first step… what would be next?

It’s funny because I hear a lot of well-meaning, but ambiguous phrases like “we need a culture shift” or “fans need to change how they react to the fights”, which are nice ideas, but they’re not terribly realistic. I don’t think this should be a long-term process or movement driven by the fans. I think it will require the courage of conviction of a powerful hockey administrator or owner(someone like Gary Bettman, though I doubt it will be Gary Bettman himself) to stand up and say “I don’t want to see anymore of our players suffering after their playing days are over. I don’t want to see anymore death, anymore homelessness, anymore mental health crises, anymore addiction, anymore prison time. We want to keep our players safe and an easy way of trying to achieve that is removing fighting from the game”.

For a good example of specifically how to do it, we can look to the major junior Ontario Hockey League. Before the 2016-17 season, it brought in a new rule that, after a player fights three times in a season, for every subsequent fight they’re suspended two games. The league cut fighting nearly in half with the stroke of a pen. A similar rule, with the addition of escalating fines for players and teams, would likely work very effectively in the NHL and other pro leagues too.

No disagreements from me! The book is terrific, and it delivers a much-needed, long-overdue message. Thanks for writing it!

Major Misconduct: The Human Cost of Fighting in Hockey is a fantastic book, and should be required reading for all hockey fans. But be forewarned: reading this book will neuter virtually any seemingly cogent argument you might have had for why fighting still belongs in hockey.