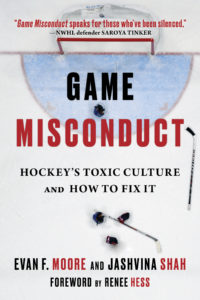 Over the course of 30+ years watching and covering the National Hockey League, I’ve seen countless instances of ignorance, bigotry and irrefutably horrible behavior. From Graham James’ abuse of players (including Theo Fleury) to the Toronto Maple Leafs’ ushers sexually assaulting children at Maple Leaf Gardens to the racial epithets (and bananas) often hurled at Black players, it’s clear that there is (and has been) plenty of ugliness prevalent in hockey culture.

And if anyone was of the belief that the sport has (finally) evolved beyond all that, last week’s exposure of the Chicago Blackhawks’ horrific decision to bury Kyle Beach’s sexual assault complaint against video coach Brad Aldrich in 2010 – out of fear that it would disrupt team chemistry during a Stanley Cup playoff run – certifies the reality that priorities and values within the sport need serious rehabilitation. How sad it is that Beach still feels guilt today for not doing more to stop Aldrich before he victimized anyone else, when the responsibility for that really falls upon the Blackhawks organization (and its leadership at that time).

Indeed, the timing couldn’t be more perfect for Game Misconduct, a new book written by Evan Moore and former Inside Hockey reporter Jashvina Shah and published by Triumph Books. The book breaks down the many ways in which hockey culture is rooted in bigotry, and details some important ways that the culture needs to change in order to properly serve all its players and fans.

Here’s an excerpt from this terrific, timely book…

USA HOCKEY SAYS the goals of its youth programs are: “To provide an innovative grassroots foundation for the growth and development of USA Hockey, designing programs aimed at increased participation, improved skills, and a responsible environment for the conduct of youth hockey.”

Under the coaches’ code of conduct, one of the bullets calls for coaches to “be concerned with the overall development of your players. Stress good health habits and clean living.”

In 2019, a CBC investigation revealed that at least 222 amateur sports coaches in Canada had been convicted of sexual offenses in the last 20 years, affecting more than 600 victims younger than 18. The offenses spanned all sports, but hockey had the most charges (86) and convictions (50) between 1998 and 2018. The sport with the next highest instances was soccer, with 40 charges and 27 convictions. In almost all cases, athletes were training with their coach.

CBC reporters Lori Ward and Jamie Strashin wrote, “For years, experts say, sports organizations at all levels have created anti-abuse policies without actually knowing the full scope of the problem.”

The U.S. Center for SafeSport reports that one in eight athletes will experience sexual abuse or assault in their sport by age 18. Athletes with disabilities are four times as likely to be harassed or abused as those who are able-bodied.

Editor’s Note: Inside Hockey often provides advertising space for its team members when they independently release a book about hockey. Though Jashvina no longer writes for Inside Hockey, the same courtesy has been provided as if she were still an active member of the team. All promotion provided to “Game Misconduct” has been provided free of charge.